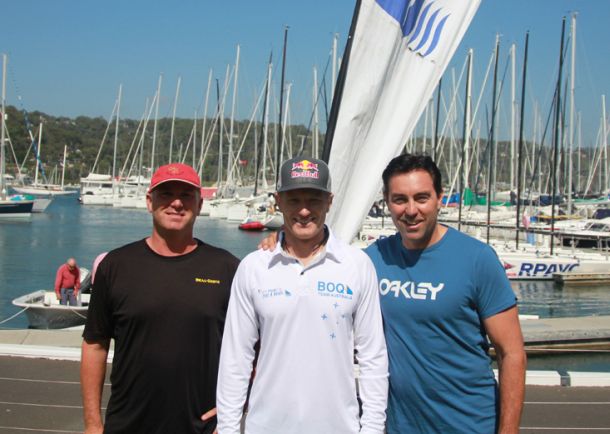 The blocking pattern of a huge stationary high pressure system over the Tasman Sea is going to decide conditions for the Club Marine Pittwater to Coffs Yacht Race fleet of 28 yachts. Other than some variation at the start and for the first few hours, each day will be déjà vu said Bureau of Meteorology forecaster Michael Logan at this morning’s mandatory weather briefing at the host club, the Royal Prince Alfred Yacht Club at Newport on Sydney’s northern beaches.

At the 1pm start this afternoon, Friday January 2, 2015, to the north of Barrenjoey Headland, a 10 knot sou’easter tending east as the day warms is forecast.

Light winds are likely during the transition period then further north and out to sea the fleet can expect to run into the dominant north-easterly sea breeze. And that’s the pattern for the remainder of the 226 nautical mile race – an upwinder in t-shirts and shorts all the way to Coffs Harbour.

With little background swell and current, the degree of strength and how north of NE the pressure swings are the questions navigators can ponder for the first race of the Australian yachting calendar’s new year.

“There are no records on offer,” said Sean Langman, skipper of the ORMA 60 Team Australia that has one of the most famous names in yachting, James Spithill, on board. “Still, it requires the same discipline, you can’t treat it like a cruise.”

Team Australia starts 15 mins after the monohull fleet and Langman’s aim is to catch then cover Beau Geste, Karl Kwok’s Botin 80, the largest yacht in the fleet.

For David Williams from the local RPAYC Farr 40 Harlequin, “light is good” according to the helmsman.