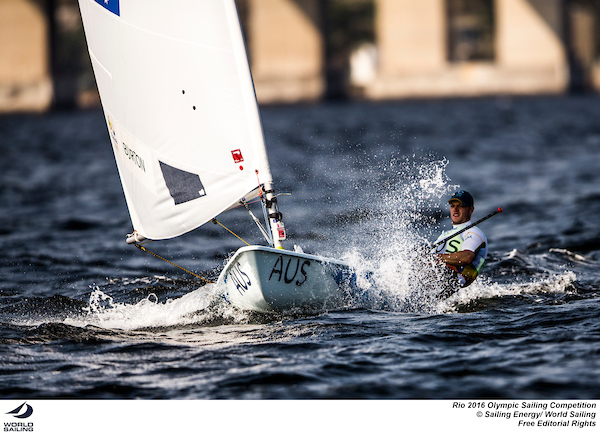 Yesterday, sitting in 11th position and a long way off the lead, things looked bleak for the current World Laser Champion, Nick Thompson of Great Britain. But as so often happens at the Olympics, adversity brings out the best in true champions and he goes home to bed tonight in second place, nine points behind Tonci Stipanovic of Croatia.

It was obvious that only a series of low scores could get Thompson a medal and he responded today with a second place in the first race and a win in the second.

Sailing in the same atrocious conditions of wind, rain and big seas as the other classes on the outer courses, the Laser men didn't finish until it was almost dark.

Descriptions ranged from”crazy” to “appalling” with the most common complaint being that it was almost impossible to see which way the wind was going to go through the constant rain squalls that swept the course.

It was a bad day for overnight leader, Julio Alsogaray (ARG) who dropped to sixth after a 24th and a UFD were added to his score.

Australia's Tom Burton also had a tough one. A ninth and a 14th saw hi drop a place, but he is just six points out of third place and more big conditions are predicted for the rest of the week, so places will continue to change with each race.

Tomorrow is the rest day for the Lasers and most f the fleet will look forward to a break. They will also hope that conditions have settled by Friday when hostilities resume.