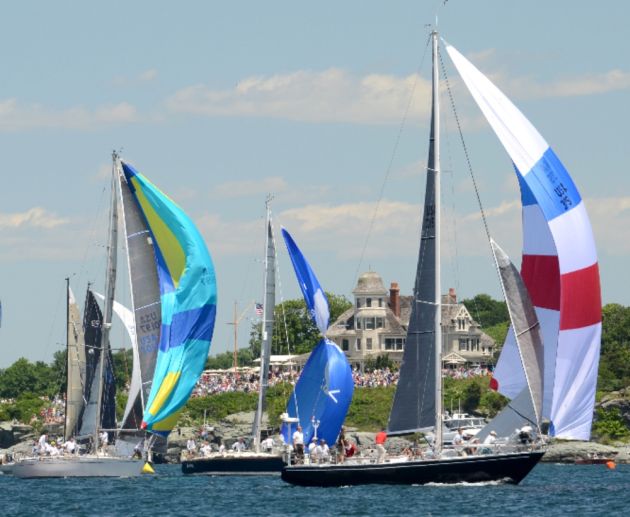 Newport RI, January 19, 2016: By mid-morning Tuesday, only one week after the entry system opened for the 50th running of the Bermuda Race,107 yachts have started the entry process online to qualify for a place on the starting line at Newport on June 17, 2016. “We didn't get 100 entries in 2014 until the fourth week into the process,” exclaimed Bermuda Race Organizing Committee Chairman A. J. Evans.

“Activity this year has been so heavy that our Bermuda Race email server was swamped and we had to upgrade capacity.  It was a good problem to have, although we regret the delays a few users experienced. Our new SailGate entry system, which ably handles the Fastnet Race entries, did not have any problem.”

Race officials have reached out to anyone who tried to enter while the email server was down. Yachts that have registered their application for entry are posted on the website. See Applicants.

Widely known as “The Thrash to the Onion Patch” in recognition of the frequent rough weather in the 635-mile sprint across the Gulf Stream, this Bermuda Race is the 50th since it was introduced in 1906. Sailed in even-numbered years, the race had its largest fleet of 265 boats in the centennial race in 2006. Since then, the fleet has averaged 177 entries.

Leatrice Oatley, Commodore of the Royal Bermuda Yacht Club, the race co-organizer with the Cruising Club of America, echoed Evans’ excitement. “Bermuda and the Royal Bermuda Yacht Club look forward to hosting a big fleet this year to celebrate the 50th ocean race to Bermuda. We will have a week-long celebration of offshore racing in Bermuda, with the Newport Bermuda Race finish and prizegiving, and the RBYC Anniversary Regatta, which is the final stage of the three-event Onion Patch Series.” Oatley encouraged captains to get their entries in early because of the new 200-boat limit for race entry.

Registration for the race’s Safety at Sea Seminar, organized by the Cruising Club of America, is running 25 percent heavier than usual. The seminar is on March 19-20 at the Marriott Hotel, in Newport, RI.

Notable yachts on the first week’s application list include 2014 St David’s Lighthouse winner “Actaea,” a Hinckley Bermuda 40 from Annapolis Md. coming back for her 11th Newport Bermuda Race under skipper Michael M. Cone. Hap Fauth’s standout 'Bella Mente', a Maxi 72, is always in the running for Gibbs Hill Division line honors, but in the next race she may trail the big Open Division cant-keel Sydney-Hobart Race veteran 'Comanche' owned by Jim Clark and Kristy Hinze Clark.

Race Chairman Evans will be aboard Leonard Sitar’s J44 'Vamp' for his 10th Newport Bermuda Race and the yacht’s 12th.  Also returning is Dr. Philip Dickey’s Swan 46 'Flying Lady'. In the 2012 race, Dickey was one of three captains presented with special Seamanship Awards for their efforts to assist a competitor with a sick crewmember. This year is the 50th anniversary of Nautor’s Swan Yachts.

Applications for Entry in the 2016 Newport Bermuda Race will remain open until April 1 through the race website, BermudaRace.com. The registration and race schedules are posted on the Official Notice Board on the home page along with other important information.

Learn about Safety at Sea Seminar topics, speakers, and registration at Safety Seminar.

To help captains through the entry process, which includes boat inspection, the Bermuda Race Organizing Committee has posted the Guide to Entry on the race website.  First-time captains are invited to request advice and assistance from an experienced Race Ambassador.

Skippers may reserve berths in Bermuda at this time. The reservation form is posted on the website's Official Notice Board.