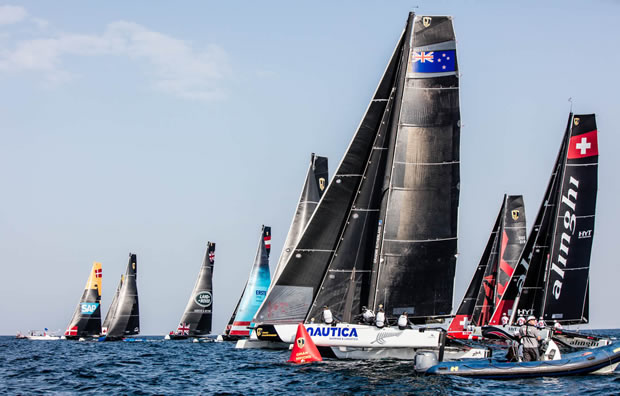 The GC32 Racing Tour will break new ground when it visits southern Sardinia at the end of June: This will be the first time that a major international sailing event has been held at Villasimius, on the Italian island’s southeasternmost tip.

While Cagliari is well known in international sailing circles having previously hosted events for the  TP52 and RC44 circuits as well as being the base for Luna Rossa’s 35th America’s Cup challenge, Villasimius, until now, has been something of a secret Italians have liked to keep to keep to themselves. Situated 50km east of Cagliari, it has some of Sardinia’s finest white sand beaches as well as the azure blue water for which the island is famous. It even features a salt water lake, Timi Ama, home to pink flamingos.

Taking place from 28th June to 1st July, with support from Regione Sardegna, the GC32 Villasimius Cup will be the second event of the 2017 GC32 Racing Tour, following the season opener at Riva del Garda on Lake Garda in mid-May.

Gianluca Dessi, Mayor of Villasimius welcomed the foiling catamaran teams: “The goal of the Municipality of Villasimius is to promote the area through sport; this represents for us the best opportunity to publicise the ‘Polynesia of the Mediterranean’, a paradise of the wind and life….Villasimius.”

The town of Villasimius is located at the base of a small peninsula that culminates in Capo Carbonara. On the western side of the peninsula is Marina di Villasimius where the nimble GC32 catamarans will be berthed for the duration of the event. On the east side is Valtur's Tanka Village Golf & SPA resort, where the teams and the event’s organisers will stay. Both the marina and the resort are backing the GC32 Villasimius Cup.

Director of the Marina di Villasimius, Amedeo Ferrigno, said:  “We are glad to host an international event as important as this. Given our expertise and all the facilities here, we hope crews won't want to leave the south of Sardinia and that Villasimius will become a regular fixture on the GC32 Racing Tour.”
Best moments GC32 Racing Tour 2016

For its GC32 Villasimius Cup, the GC32 Racing Tour has recruited Mirco Babini as local coordinator. Babini is a long term professional windsurfer and kite boarder and is current President of the International Kiteboarding Association. He also has strong experience in professional yacht racing having previously worked for Luna Rossa.

The Lega Navale Italiana (LNI) in Villasimius will assist in the running of the event and the racing. In March the LNI held an event in the Municipality for O’pen Bic singlehanded dinghies. Its President Sergio Ghiani said: “We hope that the GC32 class falls in love with sailing in southeast Sardinia. Our task will be to transmit the values of Sardinian friendship to all the competitors during the event. Fair winds to all.”

GC32 Racing Tour Manager Christian Scherrer concluded: “I’m very much looking forward to holding the second event of the GC32 Racing Tour 2017 in the south of Sardinia in Villasimius. The place is beautiful, renowned for it good sailing conditions and hospitality. I would like to thank all the official partners and people who are welcoming us in Villasimius.”

The GC32 Villasimius Cup will take place over 28th June until 1st July. The 2017 GC32 Racing Tour starts with the GC32 Riva Cup over 11-14th May and the five event circuit will then continue on to Spain and France. The venue for the Tour’s fourth event will be announced shortly.