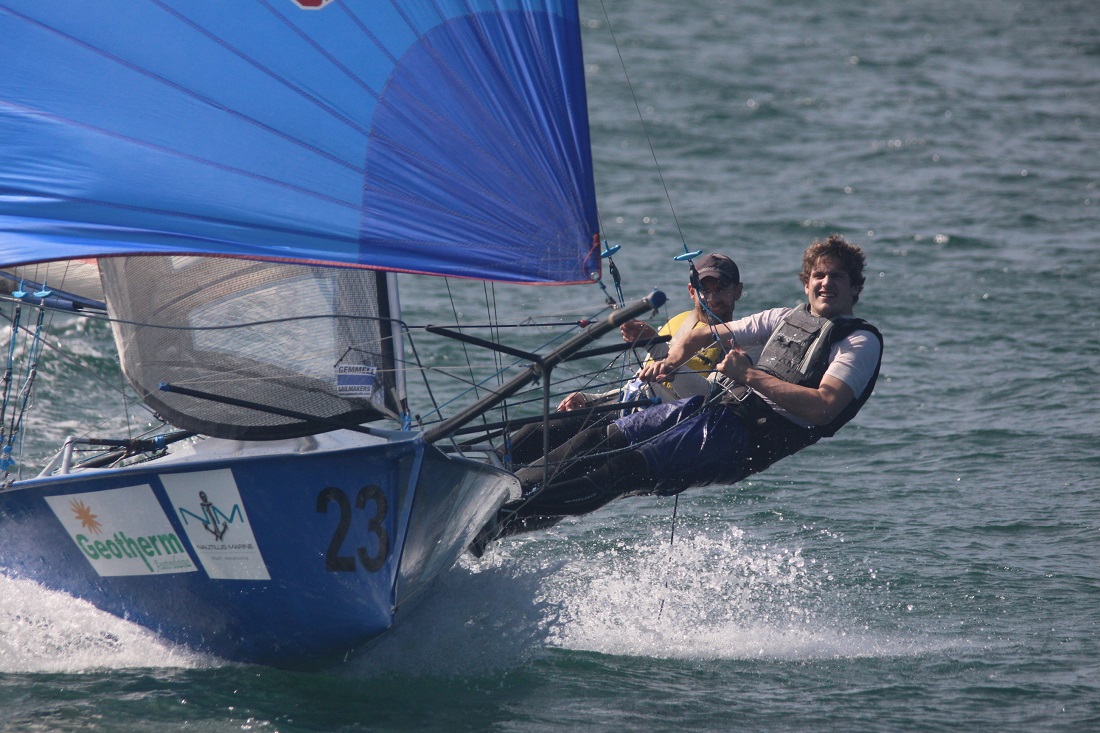 The Sydney Sailmakers crew of Nick Press and Andrew ‘Noddy’ Hay will start as firm favourites when The Kitchen Maker 12ft Sailing Skiff Australian Championship is sailed over the Easter period from 14-17 April from Lane Cove 12ft Sailing Skiff Club (LCSSC) in Sydney.

Other favourites and newer players are among the more than 20 skiffs that will be vying for the 2017 title which will also incorporate the Cherub class. Six races are planned for the 82nd running of the Championship, with racing to take place on Sydney Harbour between Goat and Cockatoo Islands.

Among those who will give the defending champions on Sydney Sailmaker a run for their money are regular sparring partners, Geotherm’s Brett Hobson/Bill Lusty from the Sydney Flying Squadron and Queensland’s The Wingman crew of James Fleming/Jono Andersen from Brisbane 18 Footers Sailing Club.

Of his time in the class, Fleming says: “Best moments are many and include when you’re hanging on by your toenails, cuddling your crew and telling them you love them; when the boat’s hitting ramps at warp speed and you’re spending the whole run looking for somewhere to land… Those days when you round the bottom mark and just laugh because you can’t believe you actually survived. It’s all about the rides.”

Sydney Sailmakers and Geotherm finished top two at the 2017 12ft Skiff Interdominions held in Queensland early this year and remain ‘the ones to beat’. Press/Hay also won the Port Jackson Championship in March.

Among their challengers will be Press’ father, Murray and his crew Charlie Gundy on Big Foot Custom Trapeze Harnesses, along with LCC Asia Pacific’s crew of Jono Temple/Richard Jones who have sailed together for an incredible 24 years.

Among the newer crews who will be giving it a crack are Brisbane’s ‘’Little Bus’ crew of Craig Dancer and Angus Barker. The pair only started sailing together this year and is looking forward to travelling south for the Championship.

Contenders for the overall handicap trophy include previous winner Arrogant Frog (brothers Peter and Steve Hill) and The Bird (Jamie McCrudden/Glenn Farquhar), while crews skippered by Murray Press and Jono Temple will not only aim for the major title, but also for the Veteran trophy. Trophies will also be awarded to the first Junior and first Cherub overall and on handicap.

The 12 foot skiffs are not for the faint-hearted. A development class, today’s 12s are light-weight carbon fibre thrill machines, with twin trapezes. They are built for pure speed and exhilaration and deliver in spades.

The Kitchen Maker 12ft Skiff Sailing Australian Championship will also feature a social program to include Ladies Day on Friday 14 April for a day of vintage wines and cheeses while viewing racing. A barbecue, Mexican night and rum and burger night are also on the agenda.

Visitors and spectators are welcome to the Lane Cove clubhouse located at Longueville Wharf, Stuart Street, Longueville, both before and after racing which will start at 2pm on Friday and Monday and 1:30pm Saturday and Sunday. Food, beverages and a program will be available from the canteen.

Your Move Conveyancing has sponsored the ferry Royale on Easter Monday for spectators to view the racing. It will leave Longueville Wharf at 1:30pm. Tickets are free (but limited). You will need to book with the Club and pick tickets up from the club canteen before boarding, it is suggested you get there before 1pm.

All information including results: http://skiff.org.au/