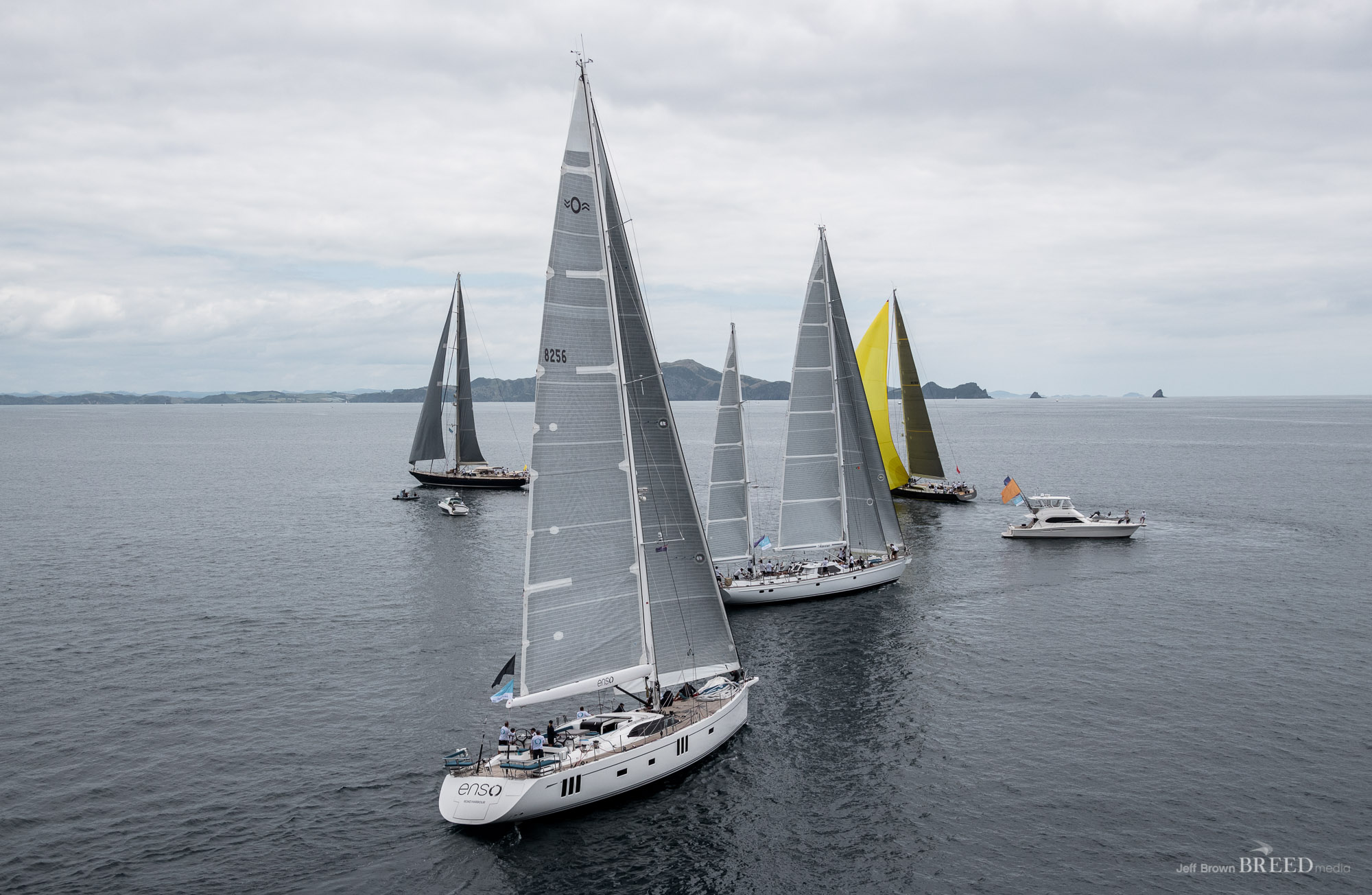 The 2018 NZ Millennium Cup has come to a close and Ammonite has taken the series, with former 2016 and 2017 champion Tawera, hot on her heels.

Despite a postponed start due to light airs, entries weren’t complaining as a pod of dolphins swam around the fleet in the mouth of the Bay. A Silvertip crewmember lay stretched along the yacht’s prod with dolphins in the bow wave beneath him rising up for a closer look, as competitors waited for the breeze to build.

“It’s a light air regatta, which makes it very difficult for competitors to find the right places to go and forced them to search for wind,” said ISYR creator and regatta handicapper, Jim Teeters who was onsite in New Zealand for the regatta. “The ones who did that best came out on top.”

A changeable wind rose towards midday. Racing got underway at 12.30 for the first of two races to cap the series. That first race saw the fleet on a leg straight down to the Orams Marine mark and back to the finish line off Long Beach.

Sassafras was first to the top mark, tacking on the nose of Tawera and Ammonite, while on the final lay line to the mark, Enso had to dip Tawera.

It was Tawera to the finish line first however, taking the first race of the day and securing a series standing four points behind leaders Ammonite and two ahead of challenger Silvertip.

The second race of the day and sixth of the series started just after 14.30 with the short course to the Orams Marine mark and a finish off Russell, a nod to the changeable light breeze.

Consistent with her strong performance throughout the week, Ammonite rounded the mark first followed by Sassafras, then Tawera, after the Royal Huisman overhauled her on the first leg. Enso followed, then it was Janice of Wyoming around the mark while high drama unfolded behind her – crowd favourite Silvertip was forced to retire due to a mechanical failure.

But there was no stopping Ammonite. The first time entry, representing the Royal Nomuka Yacht Club of Tonga finished the series in the strong style she’d demonstrated all week, taking not only the race, but the NZ Millennium Cup 2018.

“There’s no better place in the world to sail,” said Ammonite owner Marcus Blackmore at the prizegiving later that evening.

“Thanks go to all the sponsors and in particular Doyle Sails New Zealand’s Mike Sanderson who helped us understand local conditions,” he continued, going on to say that Ammonite would enjoy defending the title next year if possible.

Peter Montgomery MBE and legend of New Zealand sailing, closed the regatta as it had started – with his unmistakable tones ringing out over the waters of the Bay of Islands.

Thanking sponsors, organisers and competitors, there was also time to acknowledge the highly skilled race management team; while the increasing number of overseas guests the regatta attracts as word of New Zealand’s cruising grounds spread, looked on.

“The NZ Millennium Cup is a nice environment, in a great locale, with very good competitors, and a very friendly atmosphere,” US-based Teeters said with a smile. “It feels good to be here.”

As a focal point for both the local industry and for the global brands looking for more exposure in the growing South Pacific market, the NZ Millennium Cup is supported by a number of sponsors, including platinum sponsor Orams Marine, and gold sponsors Smuggler Marine, Bay of Islands Marina, Doyle Sails New Zealand and Servcorp.