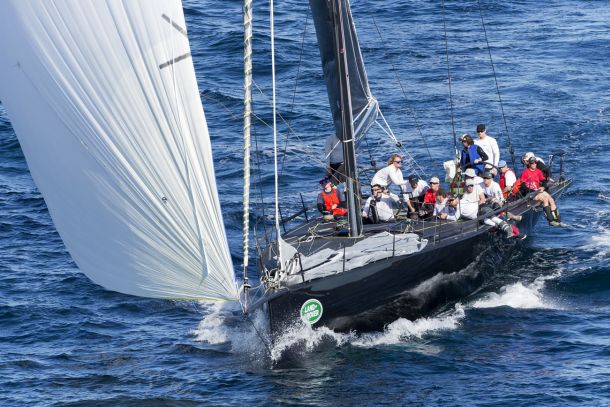 A quality fleet of 23 yachts will line up on Sydney Harbour for Race 2 of the Cruising Yacht Club of Australia’s Blue Water Pointscore on Saturday morning for a 10am start off Point Piper.

The yachts will contest the 92 nautical mile Flinders Islet Race, one of the lead-in races to the Rolex Sydney Hobart Yacht Race each year. The boat everyone will have their eyes on is Chinese Whisper. Rupert Henry re-launched the JV62 five weeks prior to the Land Rover Sydney Gold Coast Yacht Race in July and finished second on line and second overall.

The fleet won’t have much to look forward to in the way of conditions, according to the Bureau of Meteorology. Rain, poor visibility, cold and little breeze will be part and parcel, although a 10-15 south-easterly is forecast for Saturday. Oscillating winds will decrease throughout the weekend, so tacticians and navigators will be kept on their toes.

“I’m looking forward to this race and the Blue Water Pointscore. Having won the Gold Coast race, I would love to win the Hobart and beat Roger Hickman one more time,” Kearns said, referring to his main goal for the year.

Patrice’s Tony Kirby says: “We’re looking forward to this race and the offshore season ahead and we’ll take the weather as it comes.

“It’s a good, healthy fleet for the Blue Water Pointscore this year with boats like Chinese Whisper, Balance and the two Cookson 50s (Victoire and Pretty Fly III). The small boats like Wild Rose and Quikpoint are also doing very well in major events, he ended.

“I always look forward to going offshore every season, no matter the conditions,” he said. “It looks like we’ll have a few more boats this year, which is always a good thing.

Some of the yachts Green referred to are still being prepared, such as Sam Hayne’s TP52, Celestial. With Celestial’s predecessor, a Rogers 46, Haynes won the 2014 BWPS. It came down to the wire and was decided by the Rolex Sydney Hobart, in which Haynes finished 11th overall.

Syd Fischer’s TP52 Ragamuffin is also still being prepared and is to be skippered by his grandson Brenton Fischer this season. In the past, Ragamuffin won the 2007/2008 Blue Water Pointscore, placing third in 2009/2010 and again in 2010/2011.

The Flinders Islet Race IRC fleet will compete for the Ron Robertson Memorial Trophy. Ron died after being swept overboard while helming the fabled Kurrewa IV (on which he sailed six Hobarts) in a gale of North Head on 15 June, 1958. The celebrated Halvorsen brothers, Trygve and Magnus (Anitra V), were the inaugural winners of the historical Trophy in 1959.

Those contesting the race under PHS will be vying for the 67th Kings Birthday Cup.