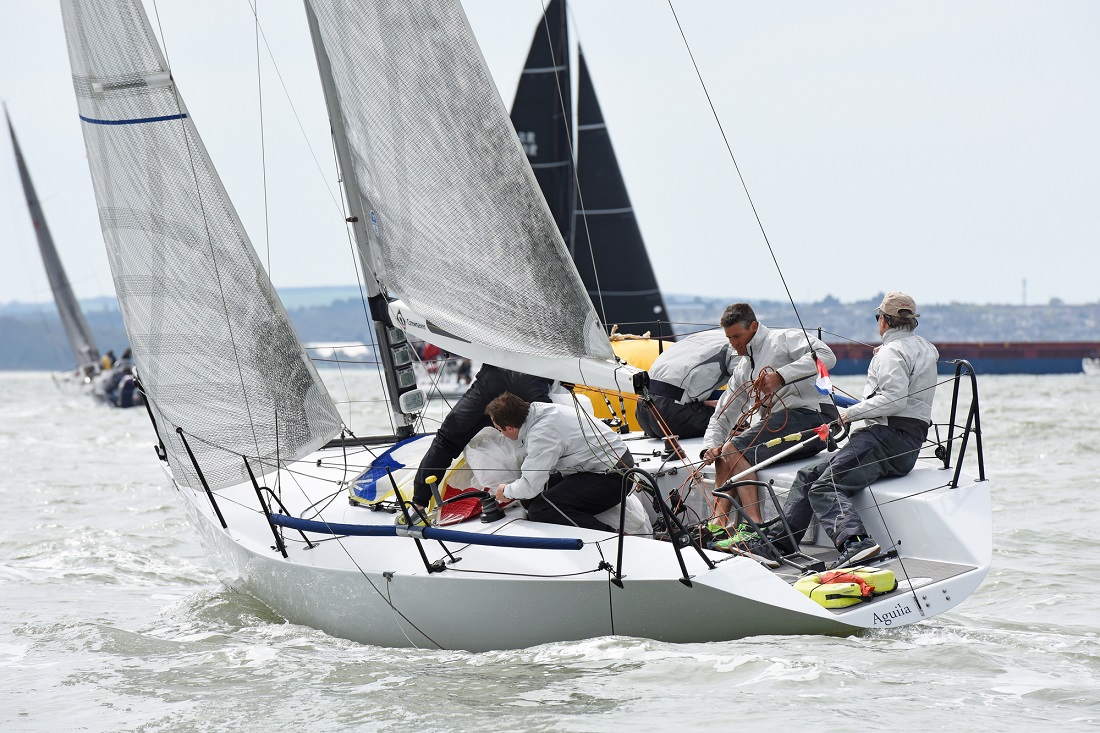 Five Diam24ods’ from the UK are entered in the Vice Admiral's Cup, plus another two coming from the boat's builder in France, where the boat has struck a chord with fleet numbers in the Tour de France, rapidly swelling.

Now the boat is taking hold in the UK, the present embryonic fleet mostly sailing out of Hamble Point Marina. “They can do around 25 knots, maybe a little more in flat water,” says UK importer, Paul Wakelin of Fluid Boat Services, explaining their appeal.

Among the Diam24ods entered in the Vice Admiral's Cup is Team Maverick SSR, campaigned by Piers Hugh Smith, bowman on the Infiniti 46, Maverick. This summer he will be leading the first British team in the Tour de France à la Voile for at least a decade, with his boat sailing with the RORC as its nominated club.

Team Maverick SSR is a youth team, meaning that their oldest sailor is 27. Smith, who is currently at university in Portsmouth, and his crew are either students or have recently graduated.

While the Diam24od held their first regatta in the UK at Poole Week last year, the RORC's Vice Admiral's Cup will be their first official outing on the Solent. “This will be our first formal race having been sailing the boat for just under a year,” says Smith.

Classes are invited to complete at the Vice Admiral's Cup and over the years they have moved with the times, the Diam24od being the event's very latest class.

Both Mortons are competing once again this year. The event was supposed to have marked the debut for Peter's brand new Carkeek 40 Mk3, Girls on Film, in the FAST 40+ class. However the boat's arrival has been delayed, so for the Vice Admiral's Cup, Morton has chartered Andrew Pearce's Ker 40+, Magnum 4.

“It's the first scoring event in the FAST40+. Fortunately points are attributed to owners and teams rather than individual boats, so we can carry the points over,” he explains.

The boat is likely to be remained Girls on Magnum for the event while also providing Morton with the opportunity to see how the other half live on a Ker (rather than Carkeek) design.

“It looks like it will be a competitive fleet,” says Greenhalgh. “There are plenty of boats and they're all trying hard. This year you could easily get a tenth in a race, because every boat is so good.”

Louise Morton will once again be campaigning in the Quarter Ton class. While her Bullit is the defending Coutts Quarter Ton Cup champion, Louise has not had it her own way so far this year with Sam Laidlaw's Aguila winning both the RORC Easter Challenge and the Warsash Spring Series.

They are putting a lot of time and effort into it – they are always out there sailing,” Louise observes. However she is confident of the prospects of her all-female team that includes Paralympic medallist Helena Lucas and Women's Match Racing World Champion Lucy Macgregor.

At least ten Quarter Tonners are expected to compete at the Vice Admiral's Cup, including Aguila and Bullit plus a couple of new additions to the fleet. As to the event which they conceived, Louise says: “We were very proud of it and we like to keep an eye on it!”