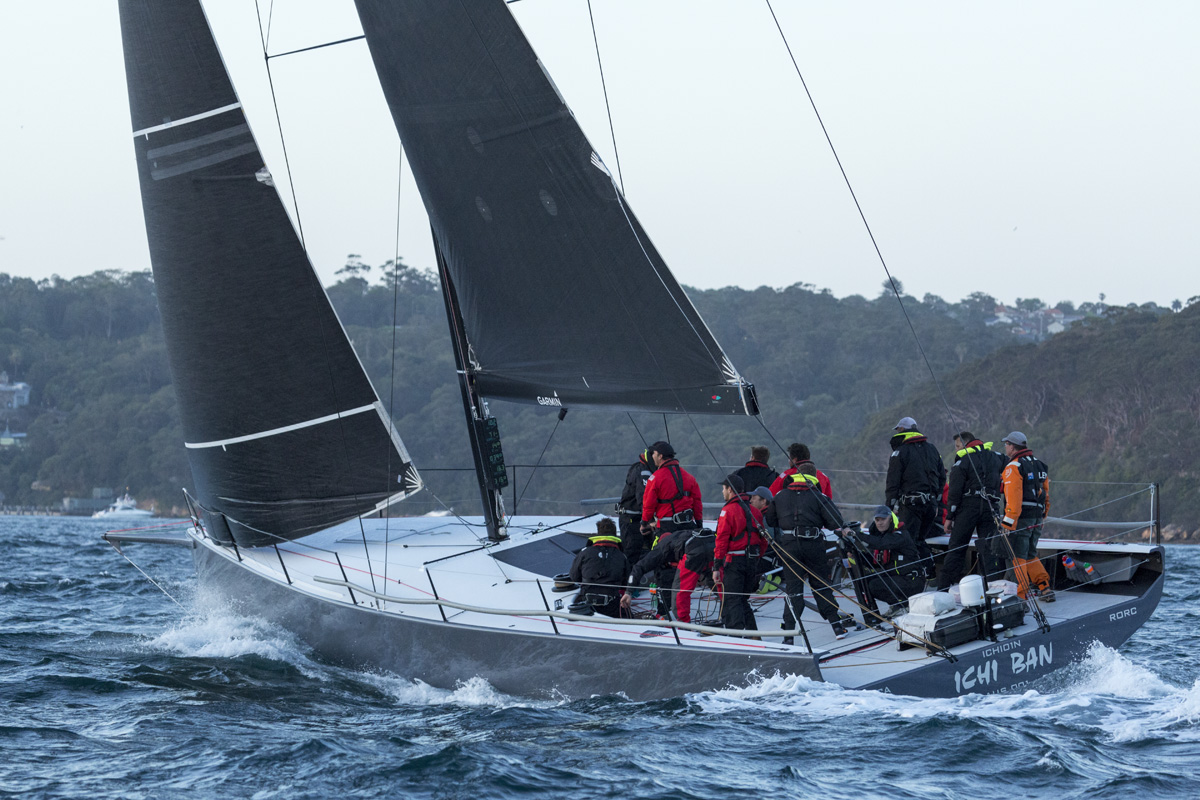 SYDNEY. A double win in her opening race has Matt Allen’s brand new Ichi Ban firming up as a favourite for the upcoming Rolex Sydney Hobart when the Cruising Yacht Club of Australia’s 628 nautical mile race starts on Boxing Day.

After blitzing the field in the 200 nautical mile Newcastle Bass Island Race on Saturday, beating her nearest rival Celestial (Sam Haynes’ TP52) over the line and overall by over one hour, a cautious Allen said of his new Botin designed TP52, “I’m obviously pleased with the boat’s performance in its first race.”

Ichi Ban finished in 23 hours 16mins 24secs, not too far outside the race record Allen created with his Carkeek 60 of 20 hours 52mins 49secs the inaugural race in 2014.

“The Newcastle Bass Island was really good timing for us to get a tough race under our belts at this juncture,” Allen said. “It gave us a really good test early on; we can see the issues that need to be addressed. We came away with a reasonable list of things to do, mainly secondary issues, so that was really pleasing.”

Allen, who recently sold his former TP52, Ichi Ban, and has his Carkeek 60 of the same name available for charter for the race, explained: “We’re using our existing mast, so we’ve cut one variable out of the equation. We’re used to sailing with that rig, so 50 percent of the work of a new boat is done.”

However, as the president of Australian Sailing pointed out, “It’s just one race – we’ve still got a few more to do before Boxing Day.”

And he is well aware that as well as taking on the fleet as a whole, there will also be a number of other TP52’s in the equation for the 73rd Sydney Hobart. One has won the race twice – as Quest (Bob Steel) in 2008 and as Balance (Paul Clitheroe) in 2015. This year she will race as Quest again.

“We rate a bit higher than the other TP52s, so we’ve configured the boat to go fast, but we still have to beat the others,” Allen conceded. “We haven’t seen Balance out of late, but that will be the TP52 to beat. They always do exceptionally well and have won the race before. When the going gets tough, their hull is configured to suit that.

“Celestial, Koa and others are sailing at a much higher level these days after spending more time on the water and making changes,” he admitted of the two’s recent performances. Koa (Andy Kearnan/Peter Wrigley) recently took the treble of record, line and overall honours in the Flinders Islet Race, while Celestial currently leads the CYCA’s Blue Water Pointscore.

Outside of the TP52’s, opposition will come from larger contemporaries such as Rupert Henry’s JV62, Chinese Whisper and older models like the 2015 and 2017 Land Rover Sydney Gold Coast Yacht Race winner, Komatsu Azzurro. The 36 year-old S&S 34 owned by Shane Kearns also came close to toppling Balance in the 2015 Rolex Sydney Hobart.

Entries for the Rolex Sydney Hobart Yacht Race close at 1700 hours on Friday 27 October, 2017, leaving little over one week for prospective entrants to sign on.

Online entry and Notice of Race in English and Mandarin are available online at: https://www.mysailing.com.au/3652