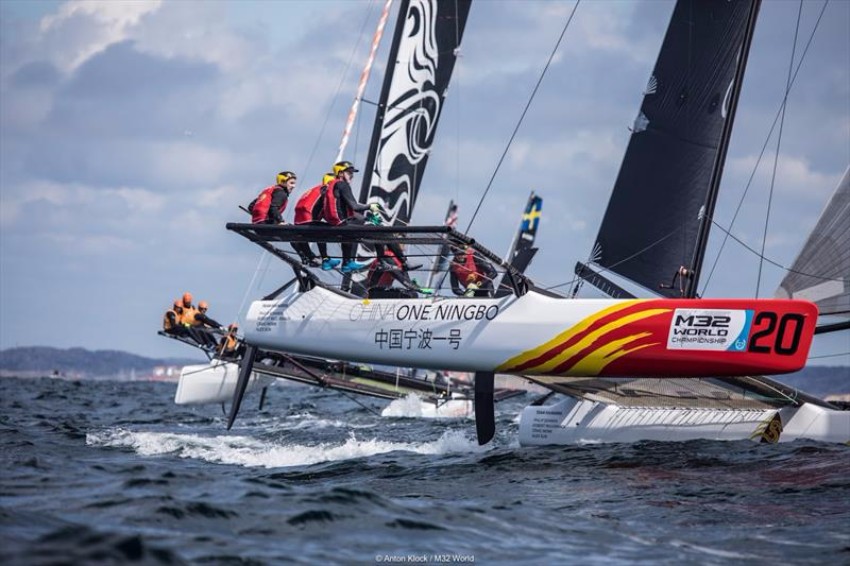 The 11th edition of the China Cup International Regatta is becoming more international than ever with the World Championship of the World Match Racing Tour set to join the 10 other racing divisions. Reigning World Champion Phil Robertson will be looking to defend his title in the high-speed M32 catamarans along with the rest of his Team CHN One.Ningbo crew. However, with around 1,500 sailors representing almost 40 different regions and nations, there will be plenty of other high-level competition going on around Daya Bay near Shenzhen, one of China’s most advanced and up-and-coming cities.

Beginning with a skippers’ briefing at the spectacularly located Royal Hong Kong Yacht Club, the four-day regatta starts with a passage race to Daya Bay on 26 October and concludes on 29 October after three days of short-course racing around the cans.

The international fleet sees everyone from first-time racers to Olympic Champions competing alongside each other. The Beneteau 40.7 fleet is nearly always the most closely contested, and this year attracts entries from around the world including three teams from Russia. Yiihua Pocket Emirates Team New Zealand is back for a third year, skippered by Laurie Jury with a mix of youth and experience on board. The team is also bringing the sport’s most famous trophy, the America’s Cup, to display during the event and help enthuse a new generation of sailors in China. Others to watch in this hot one-design fleet include Team Mercedes-AMG skippered by New Zealander Bradley McLaughlin, My Side Team from South Africa and perennial strong performer Vanhang Longcheer which often has some of the best known Australian professionals among the crew.

In the IRC racing, Frank Pong’s 75-foot Reichel/Pugh sled, Jelik, is most likely the one to beat across the finish line for line honours, although it’s Tiffany Koo and Hero Racing who often set the pace on adjusted IRC handicap scores. Other notable IRC performers over the years include Shenzhen Seawolf and Lighthorse AlphaPlus.

This year sees a big focus on attracting young sailors into the sport. The China Cup Youth One Design Class is an international competition with five racing divisions, with keelboats being used for the first time, attracting over 100 young sailors from New Zealand, Hong Kong, Xiamen, Shenzhen and many other regions around China. The SEED Public Welfare Sailing Project, established last year, has attracted over 100 families into sailing. Also, China Cup has selected young sailors from all over the country to join the international top sailing team for training and racing in the event.

“Sailing with Family” is another strong theme of this year, with the aim of establishing a sailing carnival surrounding professional racing, and integrating sports, fashion, culture, business and public welfare. During the event, a series of activities including the Opening Ceremony, Asia-Pacific Sailing Culture Development (Dapeng) Forum, Sailing Spirit Grand Ceremony, Prizegiving Party and the lavish Closing Ceremony make this a memorable event on shore as well as on the water.

The 35th America’s Cup winner Emirates Team New Zealand continues to build its strong links with the China Cup, more so than ever with the team’s decision to bring the famous trophy to Daya Bay this year. Visitors will learn about the history and high level of performance required to win the America’s Cup in the Legend on the Ocean Pavilion. There will be other chances to get to know some of the world’s best sailors in Sailing Celebrities Face-to-Face, and enjoy the spectacle of fierce match racing of the M32 catamarans competing close to shore.

There will be four race courses, and 11 racing classes:

* The China Cup International Regatta 2017 takes place over four days from 26th October to 29th October in the waters of Shenzhen and Hong Kong. As of 16 October, there are around 1,500 sailors representing almost 40 different regions and nations including: New Zealand, Australia, USA, Great Britain, Russia, France, Spain, Italy, Portugal, Germany, Switzerland, Sweden, Norway, Finland, Denmark, Netherlands, Ireland, Welsh, Canada, The United States Virgin Islands, Belgium, Austria, Tunisia, Oman, India, South Africa, Japan, Korea, Malaysia, Singapore, Philippines, Thailand, Chinese Taipei, Hong Kong, Macau and China. China Cup International Regatta, approved by General Administration of Sport of China, is co-hosted by the Water Sports Administration Center of the General Administration of Sport of China and Chinese Yachting Association as well as Shenzhen Municipal Administration of Culture, Sports and Tourism. It is the largest China-initiated international sailing regatta, and the biggest First 40.7 regatta in the Asian-Pacific region. China Cup International Regatta has been awarded 'Asian Regatta of the year' on four occasions at the Asian Marine and Boating Awards, and by brand value is recognised as one of the top 10 sporting events in China.