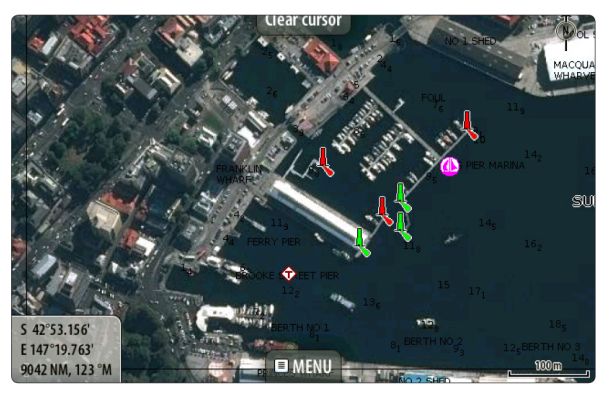 Navionics has announced new updates to Australia and New Zealand charts as well as recent innovations and expanded compatibility.

This version of the SonarChart HD bathymetry map, customized for use with several Garmin GPS chartplotters and handheld devices, is now offered in Australia. With 0.5 meter contours for depths up to 30 meters, SonarChart for Garmin GPS offers the most detail and is great for increasing awareness of shallow waters and locating fishing areas at any depth level. It also includes navigational aids, providing a complete resource for all boating activities.

Garmin customers can also record sonar logs and upload them to Navionics to improve their local charts while also benefiting from the entire boating community’s contributions. SonarChart harnesses the power of the Navionics Community by accepting sonar logs from a wide range of plotters and mobile devices to ensure charts are up to date and accurate. Uploaded sonar logs from all users are integrated with existing data to generate a new SonarChart every day. Garmin sonar recordings take about one week to be integrated by Navionics and made available for download within SonarChart. An updated SonarChart can be downloaded anytime, free for one year with the Freshest Data service.

Navionics has completed extensive upgrades to the Marine Park Zones (more than 150, see list at www.navionics.com/navipedia/new-park-zones-australia) throughout Australia to reflect the latest data from the Commonwealth Department of Environment and other local sources.

Customers who have a current Freshest Data subscription can update their Platinum+, Navionics+, or Gold charts online to get these zones. Otherwise, they can ask their dealer about the Navionics Updates kit that allows to update Navionics+ and Gold cards as well as cards from C-MAP, Fishing Hot Spots, Garmin, LakeMaster, Lowrance Insight and NauticPath, and TrakMaps. Check out the new coverage on Navionics WebApp.

Already own a Navionics card and want to upgrade to the latest Navionics+ card with one year of Freshest Data updates? The newly released Navionics Updates card comes preloaded with Nautical Chart and SonarChart at around half the price of buying a new card.

Use an existing Navionics card to activate the new card in a few quick steps and you are off boating with the latest charts onboard. As an extra feature, owners of other manufacturers’ chart cards can also upgrade to Navionics+ at the reduced price.

Most chart cards manufactured by C-MAP, Fishing Hot Spots, Garmin, Lakemaster, Lowrance and TRAK Maps are now accepted; check the continuously updated list of compatible chart cards and GPS chartplotters at www.navionics.com/navionics-updates-compatibility. Platinum+ cards can be updated directly online (Nautical Chart, SonarChart and Community Edits only) or via trade-in due to the size of the data contained.

SonarChart is an HD bathymetry map that encompasses a rich repository of depth data. Designed to provide a continuous, crowd-sourced cycle of improved charting, sonar logs uploaded after being recorded on plotters or mobile devices contribute timely data that is used to create a new SonarChart that can be viewed on plotter, mobile and PC. GPS chartplotters from Humminbird, Lowrance, Raymarine, Simrad, B&G, and Garmin can record and contribute data.

In addition, many Lowrance, Simrad and B&G units automatically store sonar data from their first day of use, allowing for an abundance of historical depth information to be contributed all at once. Raymarine Wi-Fi models can easily upload from the boat with Plotter Sync and download updated charts while onboard.

Sonar logs can also be supplied using sounders connected the SonarPhone T-BOX, an affordable transducer and Wi-Fi transmitter that enables wirelessly to your to Apple and Android devices mobile with the free SonarChart Live feature embedded within the Navionics Boating app installed through SonarChart Live. The enormous amount of sonar logs contributed by all plotter and mobile users are processed together by Navionics and made available after about one week.

SonarChart Live is the latest advancement in SonarChart, allowing users to view a new personal HD bathymetry map in a real-time display. It is an excellent way to monitor the improvements your survey will bring to the SonarChart because contours are instantly seen while you’re collecting sonar logs.

It runs on the Navionics Boating app for both Apple and Android wirelessly connected to any sounder like SonarPhone T-BOX and HDS Gen 3 which has Wi-Fi embedded. Alternatively, connect your plotter to the app through compatible routers like GoFree WIFI-1 Module or SonarServer by Digital Yacht.

From now on, you can create SonarChart Live also with your Raymarine Dragonfly PRO and Wi-Fish devices (Coming soon to Android). They both provide CHIRP DownVision in split-screen while the Dragonfly PRO also equips you with a fishfinder view.

SonarChart and SonarChart Live are simple and revolutionary at the same time. Every minute that a boater spends on the water presents an opportunity to enhance the definition of SonarChart at the HD level by simply recording sonar logs and effortlessly sending them to Navionics.

Contributions from any of the major plotter manufacturers or mobile devices can be integrated with existing chart data, and by aggregating these data sets, the end result is a superior level of detail. This crowdsourced approach is also self-correcting; errors can be cancelled out with accurate data, missing information can be completed, and different devices can help show marine or lake structure from diverse points of view.

Crowdsourcing also occurs with Community Edits, where every user can add more data and information to any Navionics chart directly from their mobile device. The simple user interface offers a wide variety of icons that can be added to the map with labels and descriptions, allowing for local knowledge like submerged rocks, obstacles and corrections to map errors, or even suggestions for leisure activities, to be shared by millions of users for the benefit of all boaters. A rating and editing system allows additions to be self-monitored by the community.

Navionics has made it easier for boaters to plan outings on a mobile device using the Navionics Boating app’s improved Autorouting feature. New functionality enables route planning from dock to dock along coastal marine, lakes and major rivers areas. Autorouting is for general planning and reference only – it does not replace safe navigation practices and should never be the only reference source.

Everyone can see Navionics charts on the web for free with the WebApp at www.navionics.com or on any website using the Navionics Web API. Implementation can be done in as little as three minutes and supports overlay of points of interest and other third party data.

A streamlined process enables Nautical Chart and/or the SonarChart HD bathymetry map to easily be added to a website in conjunction with a list of advanced features to better engage with any online audience. The Web API is an exceptional reference tool for organizations and professionals in the boating industry, such as marine and fishing apparel dealers, publishers, marine electronics manufacturers, charter companies, distributors, fishing forums, fishing tournaments, regattas, seaside retail locations, and many more. For more information on the Navionics API visit www.webapiv2.navionics.com.