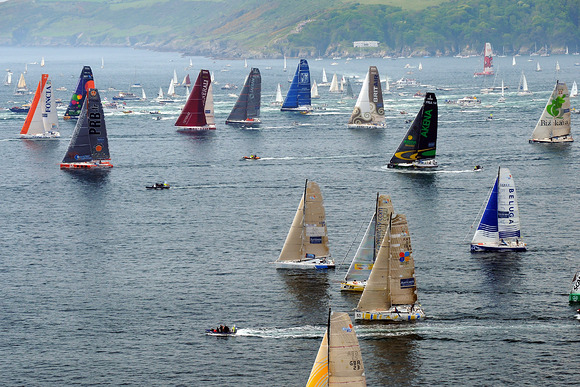 With the closing date for entries to the 2016 edition of The Transat fast approaching, three new skippers have added their names to the starting roster.

The third new skipper to declare is Richard Tolkien who becomes the second British sailor planning to take on the 3,000-mile course across the north Atlantic from Plymouth in the UK to New York City. Tolkien will sail the 1998 Finot-designed IMOCA “44”, formerly ‘Sodebo’ and ‘VMI’.

Tolkien will take to the start on May 2nd in Plymouth as part of his preparation for the 2016 Vendée Globe solo round-the-world race. He is hoping to better his previous time for The Transat of 17-and-a-half days, set in 1992, when he finished sixth in the monohull class.

“Obviously boats were slower in those days and hopefully I will go a little quicker this time,” said Tolkien, aged 61 who lives on the British south coast. “My objective is to finish, qualify and learn” added Tolkien who joins fellow Briton Miranda Merron, skipper of the Class40 ‘Campagne de France’, in the currently 19-strong Transat fleet.

For Nigon The Transat is a chance to make up for his last encounter with the Atlantic – the 2014 Route du Rhum – Destination Guadeloupe – when he was forced to retire. “I have not yet come to terms with that,” he said, “and now I want pay-back for all those who have supported me and even more for those supported by my chosen charity.”

Nigon has raced for 11 years to help raise awareness of the global fight against AIDS and The Transat is part of a programme of sailing leading up to the 2020 Vendee Globe. “The Transat is the first solo north Atlantic race, a legendary race. It is a great adventure and kick-starts my five-year programme working towards the 2018 Route du Rhum and the Vendée Globe two years later,” he said.

The announcement of the latest skippers to take part comes just three days before the formal closing date for entries on January 8th. Herve Favre, Offshore Sailing Events Director for OC Sport, the owner and organiser of The Transat, said: “We have had a fantastic response to our re-launching of this classic race and we are optimistic more skippers will sign before the deadline.”

The Transat 2016 features for the first time a fully-crewed and non-timed Pre-Start Stage or Warm-Up from St Malo to the official race village at Plymouth. The race village will be open at St Malo for four days prior to the departure of the fleet and journalists and guests of sponsors will get the chance to sail on board the boats on the way to Plymouth.

Among high-profile skippers who have entered The Transat 2016 are the IMOCA single-handers Seb Josse on Edmond de Rothschild, Jean-Pierre Dick on St Michel-Virbac, Armel Le Cléac’h on Banque Populaire VIII and Paul Meilhat on SMA. The Ultime class is currently made up of Yves Le Blevec on Actual and Thomas Coville on Sodebo – more to be announced soon.

In hospital following surgery, Class40 skipper Maxime Sorel (V&B) has had to put his Transat preparation on hold. Despite being immobilised for two months, a determined Sorel still has his sights set firmly on The Transat start line and is planning to be in St Malo for the Warm-Up leg: “My Transat preparation has been delayed,” he admitted, “but my goal is still a top five position in the Class40s.”

Vendée Globe hopeful Paul Meilhat has also had to put his campaign on hold. Rescued from his boat on December 15th following an injury during the Transat St Barts – Port La Fôret race, until yesterday Meilhat’s new generation IMOCA 60 ‘SMA’ was still to be recovered. The SMA team now have two crew aboard the 60ft monohull and are deciding whether to head towards Ireland or France to asses the damage.

With almost 20 boats now entered, the 2016 Transat fleet is filling out nicely. Entries for The Transat are open until January 8th, 2016. Teams interested in entering should contact: entries@thetransat.com.