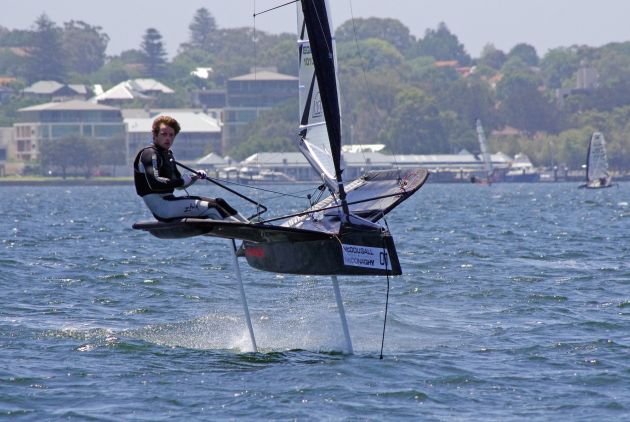 The moth fleet sweltered in the heat scattered around the boat park at the South of Perth Yacht Club under the shade of trees and in air conditioned rooms waiting for the scorching Easterly breeze to stabilise.

With the thermometer reaching around 42 degrees mid afternoon, race officer Les Swinton sniffed a small window of opportunity to squeeze two quick races in when the sea breeze finally forced its way down the Swan River.

There was a lot of ‘bimbling’ around the boat park and mothies strugglng in their choice of size of foils, (critical to have the right foil for the wind speed as it turns out!).

In race one of the day (race 11 of the series) the unstoppable force that is Josh Mcknight (NSW) again led the fleet round the race track in the short two lap race held in a 11-12 knot WSW patchy breeze.

Race 12 started soon after with an extra lap before a big thunderstorm threatened to shut down the breeze again for the day. Andrew ‘Amac’ McDougall bolted off the pin end of the start line timing it perfectly and challenged guess who? (yes Josh Mcknight) for the lead on lap 1 but it didn’t take long for the irresistible force to snatch the lead and never look back. WA’s Steve Thomas pushed Josh hard on the second lap and looked good for second before just losing out to the flying Brit, Ed Chapman on the final lap. Amac dropped a few spots allowing Rob Gough to recover to fourth. Victorian Harold Mighell scored his best result of the championship with a 5th.

Steve Thomas describes his day: “I started the first race a bit shaky, I didn’t get off the line very cleanly, i worked my way back into the race to score a keeper.”

“In the second race I had a good one, rounding the top mark on the transom of Josh and from there stayed just behind Josh but a couple of crashes off the foils put my back into 5th. But I had a good upwind on the third lap and a reasonable downwind with only one crash.”

“The breeze was a lot further west than the true sea breeze and just surged a couple of times to get everyone excited but it has been quite unusual weather for the last couple of days.”

The two Italian brothers from Lake Garda, Stefano and Gian Maria Ferrighi both had a good day, Stefano with a (5,8) to move up to 7th overall and Gian with a (6,7) to climb to 13th.

So with one more race day to go, Josh Mcknight has one hand on the trophy with a scorecard of no less than 10 bullets as the second discard comes into play. Rob Gough looks quite comfortable in second with 25pts and Ed Chapman of GBR in third with 34pts. Steve Thomas is just off the podium in fourth.

Racing starts earlier on the final day with 3 more races starting at 1100 hrs local. The cold Matso’s beer tasted good on return ashore but lets hope the temperature drops a little for the carbon foils to cool down.

For full results and more info go to: