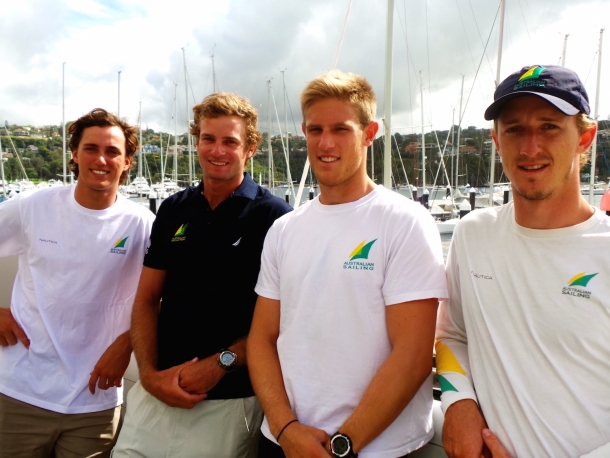 “When you come into this successful team, you should remember what an extraordinary achievement it is to win an Olympic gold medal. Aspiring to win gold at the Olympic Games is far from ordinary and you are not part of an ordinary group of people sitting in this room. As a team you can rightly claim to be the top Olympic sport group in the country and coming into that you are in very privileged position,” Tom King reminded the new comers in his induction speech of the significance to qualify for the Australian Sailing Team.

“To requalify for AST is a great feeling” an excited Matt Wearn said. “Especially to bounce back after my worlds experience. It’s just nice to get back on track for 2016.”

“It’s great to see our team grow. It’s a really strong training squad we have now and the stronger our training partners, the stronger it makes us”, Nathan Outteridge said about the recent additions to the team. “Clearly Emmett is doing a great job with the team and it is looking good not only for Rio 2016 but also for Tokyo 2020.”

“We feel very well supported”, he added with a smile when asked if he felt chased at all from within the own team.

“Nathan and Goobs (Iain Jensen) have been on top of the Australian Sailing Team and now they’ve got a couple teams getting some really good results behind them and as a squad I believe it will definitely help Nathan and Goobs as well if we keep pushing them”, Joel Turner agreed. “And in case something happens to Nath or Goobs we will be there ready to jump in, keep the finger on the pulse and keep pushing hard.”

“The entire squad is working together really well and we are all stepping forward. The squad has just gone from strength to strength, it’s four teams all working together on the Australian Sailing Team and the Squad and it’s a great environment with all of us getting some good results”, Turner said

“It means a lot for me to qualify for the Australian Sailing Team as it means all the hard work over the last couple of years in the 49er have paid off. Being part of the team means we get extra access to everything the Australian Sailing Team provides such as resources, coaches and support and that will be essential to keep improving and to keep getting good results”, Turner explained the benefits of being in the top team.

The majority of Australian Sailing’s athletes will continue training on home waters before  heading across to Europe at the end of March 2015.