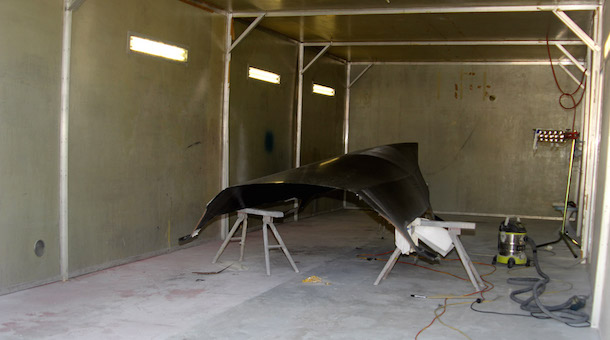 You know the Australian summer sailing season is not far away when the first of the new 18ft Skiff hulls emerges from the Van Munster Boatbuilders factory at Morriset, on the Central Coast north of Sydney.

First of the new skiff hulls for the 2015-2016 Season, Thurlow Fisher Lawyers, received her super smooth high gloss paint job this week and the team is now about to prepare her for the first race of the Australian 18 Footer League season on 11 October.

Thurlow Fisher Lawyers will have the same team together for the major championships in 2015-2016 and is certain to be amongst the top contenders for all titles.

Two times JJ Giltinan champion Michael Coxon is the skipper, Dave O’Connor is on the sheet and Trent Barnabas in the bow.  This is the current NSW State and Club Championship-winning crew from the 2014-2015 Season.

The Van Munster-built hulls have been a very important part of the continual quality and competitiveness of the Australian 18 Footer League’s fleet since Brett Van Munster began building 18s for the 2006-2007 Season.

Looking back over the 10 years since Van Munster Boatbuilders have been the 18ft Skiff Class official builders, Brett Van Munster was pleased with how the program has developed:

“We are still using the same carbon fibre-Nomex materials that we used back in 2006, but we have greatly refined the building process”.

“We now use 3.5kg more carbon fibre in each hull, but the finished hull now weighs 2kg less than the originals.”

“A new deck mould was incorporated a couple of years ago which has also made the boats stronger.”

“We asked the engineers at Gurit, Steve Quigley in particular and the technical committee to have a look through and change some of the fibre layout and frames.”

“The idea was not to make the boats go quicker but to put up with the increased loads of the high modulus rigs and square top mains and to cope with the trend for heavier crews adding additional righting moment.”

“The recent developments in High Modulus rigs and square top mainsails have increased the overall global structural loads so we’ve had to update the structure of the boat to increase longevity.”

“We are conscious of trying to keep a stability in our product and everything which comes out of our factory is the same as what Gotta Love It 7 (the current champion) gets.  Every boat has the same fuselage.”

“It’s a bit like a football salary cap.  We’re trying to give everyone the same opportunity from an equal base.”

Brett Van Munster is also very mindful of giving the Australian 18 Footer League a “good return on it’s investment and we work hard to make sure the boats last longer.”

Testimony to the longevity of the Van Munster product was Gotta Love It 7’s win, as a four-year-old hull, at the 2013 JJ Giltinan Championship”.

Steve Quigley, the 1996 JJ Giltinan champion, as Class Measurer and a leading naval architect, is at the forefront of the whole development and building program of the skiffs.  Steve is also a Director of the Australian 18 Footers League.

“We have a great relationship with Brett, Gurit and our internal design team that ensures both the continuation of the controlled development of the class to ensure it remains relevant whilst protecting the heritage and commercial viability of the boats and the League’s significant investment in the class.”

“It’s a fine balance and we may not always get it right in the minds of some of our stakeholders, but at the end of the day our goal is to ensure a fair race for all participants by maintaining the one design aspect of the hull and foils whilst allowing development of the sails and rigs.”

“It’s a formula that’s working well for us at the moment but we also need to continue a path of controlled development so we look forward to working with Brett on further improving the boats longevity as composite technology advances.”