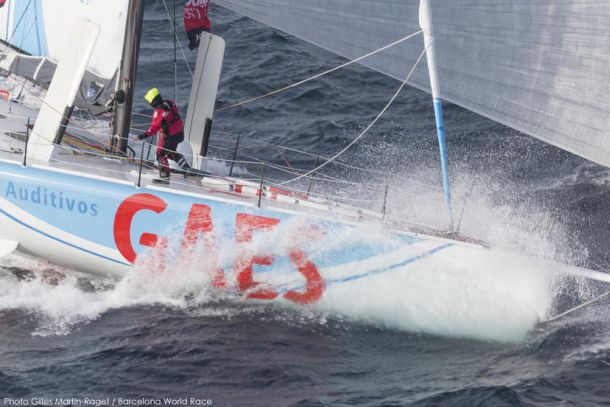 From a lead of over 200 miles Wednesday evening, Bernard Stamm and Jean Le Cam on Cheminées Poujoulat, have had their margin trimmed back to closer to 120 miles ahead of Neutrogena as the two leaders close rapidly towards the longitude of Cape of Good Hope.

Short term, to the Cape on the tip of South Africa, Swiss skipper Stamm is happy. With French co-skipper Le Cam, the duo made the best transition into the low pressure train and made the biggest early gains, but he noted today that their move was not easy and there will be difficult transitions ahead. But for sure their experience is telling now, both in terms of strategy and driving their IMOCA 60 at high average speeds.

For all that Altadill and Munoz are keeping the pressure on and the Spanish skipper has 20 years of racing and record circumnavigations under his belt, Stamm and Le Cam were more recently down in the big South during the last Vendée Globe in 2012, and Le Cam is a noted strategist in the south.

“We have wind and so far it has been in the right direction for us.  But this easterly flow will leave us soon and then there will be a soft transition to the next system which will carry us east of South Africa.” Stamm told his team today, “Then it is depression to depression staying with each as long as possible. There are still some strategic options to be evaulated with regard to the exclusion zone. There will be choices to make, we will make them soon but to South Africa it is clear.”

It is a fine balance. Too far north and the high pressure still lurks, with lighter, unstable winds, to the south the boundary fence which is the exclusion zone. The best will be the duo which can run the best line between the two. And while the duel between Altadill and Munoz on Neutrogena and the race leaders Cheminées Poujoulat is still separated by mere hours – reckoned to be about eight hours advantage at Cape of Good Hope – now GAES Centros Auditivos, Anna Corbella and Gérard Marin are more than one day behind.

Getting clear of Saint Helena

On Renault Captur, one can imagine that the chirpy German skipper Jörg Riechers and the laconic Frenchman Sébastien Audigane, have their smiles back now that they have broken free of the tropical high pressure zone of Saint Helena and were making a much more profitable 17kts in the SE'ly direction this afternoon. So too, progressively, We Are Water and One Planet One Ocean are heading south at more encouraging speeds having served their sentence in the South Atlantic light winds penitentiary.

On Friday each of the race crews of the Barcelona World Race will be given the green light to launch their Argo floats. Each float is about 22kgs in weight and 1.7metres high and they will help gather scientific information about the health and well being of our oceans and the planet. Each float will remain afloat for about ten hours before diving itself to 1000 metres for ten days, then it will descend to 2000 metres and then return to the surface. Each cycle will emit data on the salinity and temperatures at different depths.

Race Direction have reminded crews of the exact procedures and protocol. Skippers then have the choice of when to launch their own beacon. But they must give details to Race Direction of the launch time and position. This program is initiated by UNESCO-IOC in partnership with JCOMMOPS, Coriolis (France) and the Barcelona Foundation for Ocean Sailing (FNOB)

In Barcelona before the start Nathanaële Lebreton, head of the Coriolis Argo deployment team at Coriolis France, explained to the skippers how the the Argo float works.

Bernard Stamm (SUI) Cheminées Poujoulat
When Neutrogena went south, were you tempted to go with them?
“No this is our way, our strategy. If we ahd wanted to go south we would have gone before. After they had gone we looked to see if we needed to cover them by we didn't and so we stuck with our choice, we'd made it, and it was not possible.”

You're not unhappy with the outcome anyway?

“Yes, we are very happy with our position and how it is all going. We don't need to consider what they are doing on the other flank to be happy with what we are doing. We are good right now and we will see after South Africa if they get back at us.”

You will soon face the Southern Ocean. Despite your experience is there a lingering apprehension?

“There is no fear for me, not at all. There is an urge, a drive and then a high state of alert. And Vigilance, that is the word I was looking for.”

Do you plan to do a check of the boat before Good Hope?

“There will be no chance before Good Hope, Guillermo's here and we are going at high speeds. We do check the mast and the boat when we can as we go along, always. Before some periods of strong winds we can check the boat, but sometimes not. These winds and seas stress the boat. But we cannot go up the mast we have not had any calm moments.”

Jean and you have your ways of approaching these things. You agree and complement each? You bring different things to each other's game?

“We have our ways. We have different ways to get to the same place, slightly different paths. It's like that when you are not familiar with each other. That's how we progress. But overall we are in agreement on many things.”

Food, have you changed for the southern latitudes?

“We have daily bags which are all prepared. The food is not the same when you're at the equator or when one is in the Southern Ocean. Anne and Catherine (skippers' partners) prepared the bags, I trust them, I hope they are not kidding us!”

Aleix Gelabert (ESP) One Planet One Ocean Pharmaton:
On the last edition Gerard Marin said the Kingfisher already knows its way around the world; do you feel safer on a boat which has been so often in the Roaring Forties?

“The truth is yes, to sail with a boat that has already gone around the world three times gives to you some confidence because you know the boat is reliable and that’s good because it keeps us calm.”