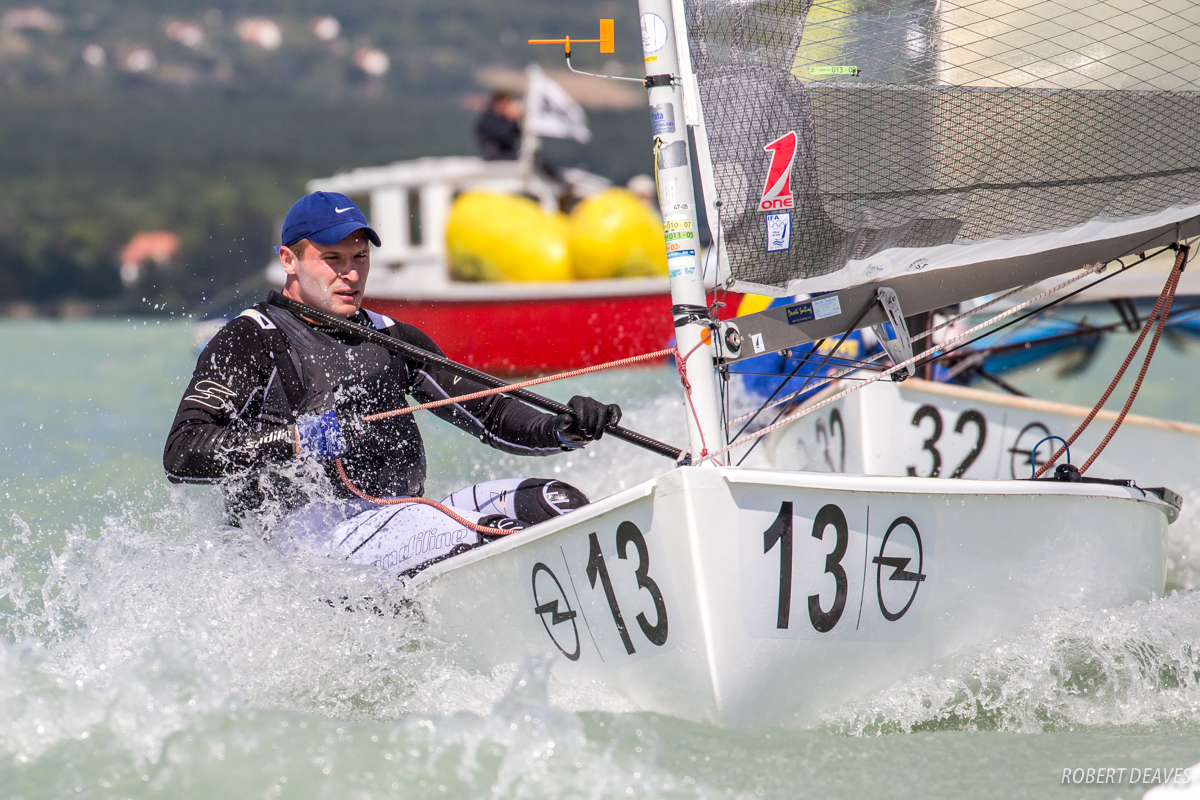 Nenad Bugarin, from Croatia, is the early leader at the 2017 Opel Finn Gold Cup at Balatonföldvár, Hungary. Two very tricky races in shifty and patchy conditions left much of the fleet with at least one high score, but home favourite, Zsombor Berecz is second, with Piotr Kula, from Poland, in third. Ed Wright, from Britain, won the first race, while Bugarin won the second.

The time for preparation had ended and it was time to race. In the end 113 Finns made it to the start line for some tight and tricky racing with the wind shifting hugely and varying from 10-16 knots.

After two false starts and a general recall, Oisin Mcclelland, from Ireland, rounded the top mark in Race 1 in first place after favouring the middle right. Jonathan Lobert, from France, was second at the top and briefly took the lead downwind, before the right side came past in more pressure. But it was Wright, who led through the gate and extended up the second beat with a nice lead.

The right side came in strong on the second beat with Anders Pedersen, from Norway, coming through into second. The fleet closed up on Wright on the final downwind as the search for pressure became paramount. Lobert came through for second at the finish, while Berecz passed some boats to cross third.

There were huge pressure changes across the course, as well as wind shifts to cope with, and with such a large fleet the leverage from left to right was massive. If Race 1 was hard enough race 2, was about to get a whole lot harder.

Race 2 was started without Oscar, though it was raised at the top mark as the wind passed 10 knots. The corners were strong with those who bailed out of the left early struggling at the top. Facundo Olezza, from Argentina, rounded first from Deniss Karpak, from Estonia and Bugarin.

Karpak had been third for a while in the first race but had got lost on the second beat and dropped 20 places. In the second race he was good enough to hold his position and the top three boats separated from the fleet. Bugarin sailed well to take the lead on the second upwind and then sailed away from the fleet for a comfortable win, from Olezza and Karpak.

Lobert, the current European Champion, ended the day in fifth overall, and was happy with his day, despite a 15th in the second race.

“It’s hard to say what to do today. It was just ‘where is the wind’? I was just trying to use what I had and make the best of it.”

“In the first race we didn’t tack so much as they were quite big gusts and big shifts, but in the second race it was very tricky. I think there were two winds, one from the right and sometimes one was coming from the left so you had to be at the right place when the wind was coming in. I was a bit unlucky at the beginning but at the end the left came back and it was a good call.”

Fourth placed Max Salminen, from Sweden, said, “I think the fleet was really keen to get racing, and we saw that at the start of the first race, but once we got away we had a really good race. It was shifty as we expected and back and forth and you had to be on your toes all the time – but that's lake sailing.”

“I think in this big fleet and in these conditions you have to be happy with what you get.”

The pressure on the race area is matched by the local pressure placed on the shoulders of Berecz, who delighted local supporters to end the day in second overnight.

“In the first race I was always in the front. The second was a bit tougher for me as I missed one shift at the very last quarter of the first upwind and I put myself back into about 40th. But on the second upwind I gained it all back and managed to finish sixth, so a good day for me.”

Asked whether local knowledge gave him an advantage, “I don’t know this water at all. I know the other side much more. I was only sailing here when I was in Optimists, but actually around the lake it’s all the same in this wind direction. It’s very tricky, changing every two minutes or so, so let’s say I am quite used to it.”

Any secrets? “We can say there is a tendency in the wind and if you can find it and you can use it your way, then you can succeed.”

But the undisputed star of the first day was Bugarin. A fourth and a first is a great performance on a challenging day.

“I managed to have two good races. I did well all the time. It was tricky outside and my strategy was just to stay in clear air all the time and have the freedom to tack. That’s pretty much it.”

“Before the starts I didn’t have a vision of what to do and the strategy was just to sail fast in clear air and I managed to do that two times and had really good speed upwind and downwind, so I am pretty happy after the first day.”

As one old and wise coach offered today, that in conditions like these, you are either very good or very unlucky. The good and the unlucky enjoyed a pizza party after racing and can look forward to two more races on Tuesday in slightly less wind but probably at least the same amount of trickiness.

It was a tough day for the eight Australians competing, with Oliver Tweddell the best placed in 19th after a 6th and 42nd.