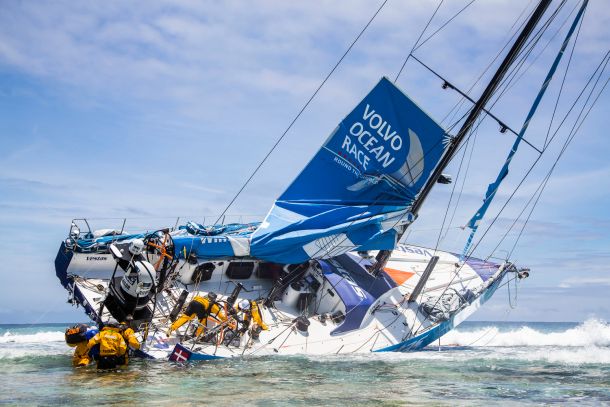 When Team Vestas Wind hit a reef in the Indian Ocean during the second leg of the Volvo Ocean Race, it was obvious that someone would be held accountable. Subsequently it was established that navigator Wouter Verbraak had not drilled down closely enough on his electronic charts and had failed to put an exclusion zone around the reef, which was only visible after “zooming in” on the charts.

The team has now released a statement, advising that Verbraak won't be part of the crew when the team resumes racing. As usual in these circumstances, the language is conciliatory but it is not hard to read between the lines. Here is the statement:

On 2nd January 2015, Team Vestas Wind announced that skipper Chris Nicholson had been tasked to review the team during the month of January. The objective is to ensure the right team for the come back to the race, which is now, for this team, of a different nature than the scheduled original route from Alicante to Gothenburg.

Chris Nicholson has completed his review, together with the lead sponsor Vestas and sub-sponsor Powerhouse, and the decision has been made that Wouter Verbraak will no longer continue as navigator of the Vestas Wind. Team Vestas Wind will be joined by a new navigator in time for the Lisbon stopover and Leg 8 start in June.Team Vestas Wind would like to thank Wouter for his service and wish him well in the future.

The remaining shore and sailing crew will continue to work as integral members of Team Vestas Wind, and will use their skills to assist Persico in the boat repair process, where possible, as well as in complementary activities that will support the Team’s return to the race , including ensuring a continuous presence in the future stopovers.

The Vestas Wind boat is now on a Maersk Line container ship en route from Kuala Lumpur in Malaysia to Genoa, Italy where it is expected to arrive on Sunday 25th January. Once transported on a truck to Persico Marine in Bergamo, Italy, Team Vestas Wind’s shore and sailing crews will begin to assist the repair process. In regards to the arrival of the boat, Team Vestas Wind will be hosting a press conference in Genoa on Monday 26th January.

“I am very sad to announce that I have been notified that I will not continue with Team Vestas Wind.

“I respect Chris Nicholson’s decision and wish the team the very, very best of luck with the hard work ahead of them in the Volvo Ocean Race. I would have wanted to help the team getting back in the race again and contribute to their success in the last parts of the race.

“On a personal note I am looking forward to the new sailing challenges that are coming up for me in the months ahead and want to keep sharing the passion that I have for this great sport with you all.

“Someone recently told me: 'Life is not about how many breaths you take, but about the moments that take your breath away'. I am looking forward to the new breathless moments to come. Ocean racing tends to offer many of them.”