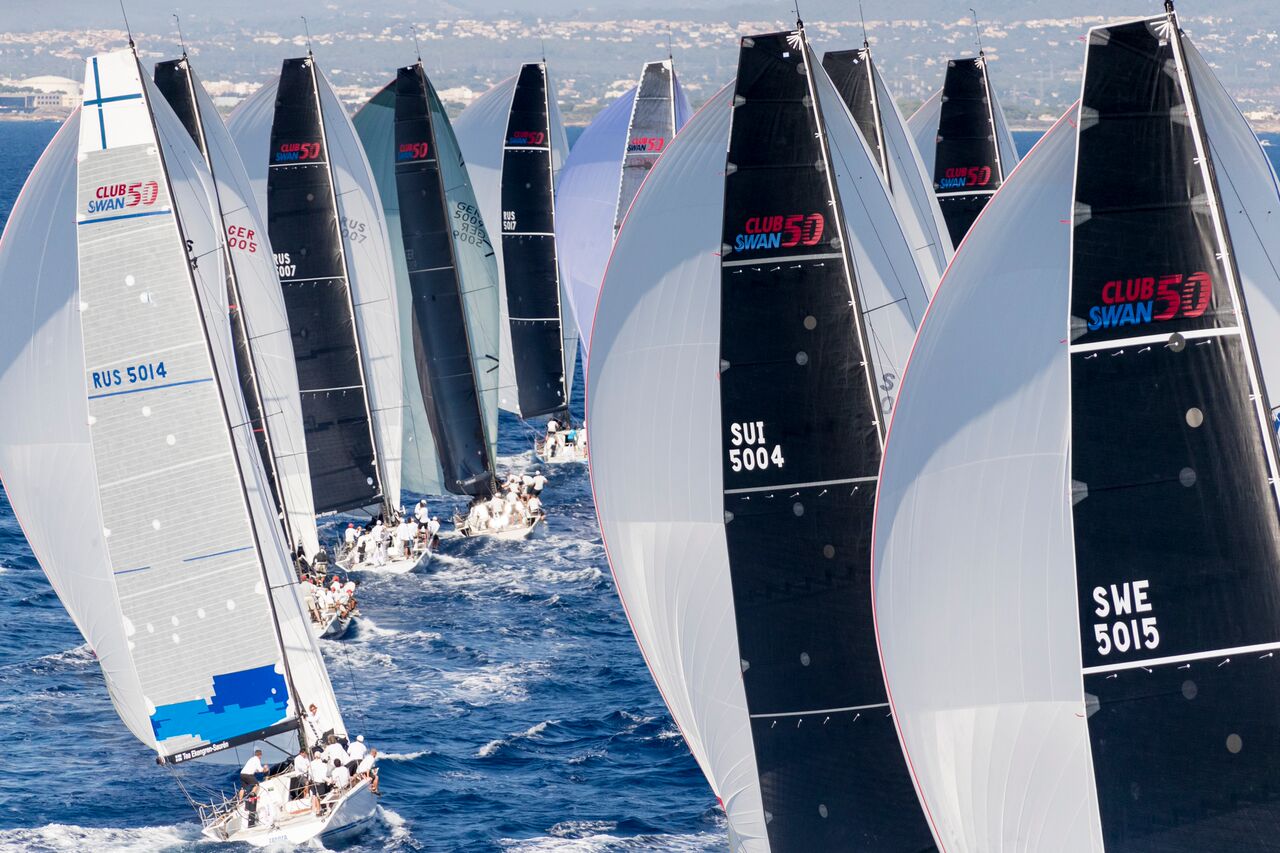 The Spanish team has secured the inaugural Nations Trophy, which ended in Palma de Mallorca today, contested by three classes of Swan one-design yachts, the best two results of each of the 11 competing countries counting towards the national prize.

By winning both the Swan 45 and ClubSwan 42 classes in commanding fashion, Spain gave little oxygen to the efforts of the other nations. Italy, the early leaders in the competition, would finish second, and Germany’s late run would collect third place.

The individual championships were close-fought affairs. The cream rose to the top, as it always does, and solid last-day scores by the class winners ensured their eventual ascendancy.

Earlybird (GER) assumed the lead of the 11-boat ClubSwan 50 Europeans on day three of the event, and the powerful team played their cards perfectly today to maintain top spot. Porron IX (ESP) set aside her problems of yesterday and, today, reasserted control of the 9-boat Swan 45 Worlds. Nadir (ESP) had already proved unstoppable in 8-boat ClubSwan 42 Europeans.

It was Groundhog Day with a twist on the weather front. Too light to go racing at noon, but when the wind did come it was from a more easterly direction and offered the strongest conditions of the week at 12–14 knots.

For those lucky enough to attend the Owner’s Dinner last night the delay gave them ample time to reminisce about the exceptional entertainment from revolutionary flamenco singer Pitingo.

Nations Trophy decided
In Race 7, Germany pressed its claim for top spot in The Nations Trophy with Niramo and Earlybird securing second and third respectively to go 1, 2 in the ClubSwan 50 class standings.

Meanwhile, with Nadir in first overall in ClubSwan 42, Porron IX needed a strong performance in the Swan 45 division to regain top spot and keep Spain in pole position. A second place combined with Motions (NED) disappointing sixth was enough to do the required damage to the chasing nations.

The final, eighth race was an edgy one. Raced in solid breeze, which offered little in the way of passing lanes, a good start was critical. In the ClubSwan 50s, Earlybird could afford a mid-fleet finish and still win her class. Niramo needed to hold off Cuordileone to retain second spot.

It took until the second beat for Niramo to make clear their ambition and nose in front. As is so often the case, though, it is a mistake that decides the sporting outcome. Approaching the leeward gate, Niramo took a gamble to round the left-hand mark ahead of Cuordileone. Niramo did so at the expense of the Italian crew. A post-race protest would see the German team disqualified and with it their country's hopes for The Nations Trophy.

Of course, the crews contesting the Swan 45 class knew none of this. For Porron IX, the goal was clear. If she could avoid losing her advantage over the two Dutch boats, K-Force and Motions, the Nations Trophy would go to Spain.

In the end, neither Dutch boat could achieve the required separation. Porron IX took a sensible fifth, deftly splitting the two boats from the Netherlands, confirming Spain’s unquestionable claim to The Nations Trophy.

Both scoring boats in the Spanish team, Porron IX and Nadir, were delighted to have contributed to the success of their nation. “I’m really happy,” said Luis Senis Segarra, owner of Porron IX.

“I have been encouraging Nadir and the other Spanish boats all week. Telling them they have to push. It is an honour to be part of the team and so great to win.”

Pedro Vaquer, owner of Nadir, was equally thrilled: “It’s so good, we are so happy. Very proud. I think it is a big thing to do. I knew it was possible because we Spanish had some very strong boats. Thank you everyone involved in the organization. I am a native of Mallorca so this is really special.”

ClubSwan 50 European Championship
“I could not have expected it would go so well in the first year of this new boat” said Hendrik Brandis, owner of Earlybird.

“It takes some luck, but it paid off that we have sailed a lot of events this year starting in the Caribbean. The boat is quite different and needs to be sailed differently, and in certain situations the extra time in the boat gave us an edge.”

Brandis was quick to point out that there were five different winners in the eight-race series: “Boats and teams have been pretty equal here. It was great one design racing. We didn’t hit the top until yesterday and that reflects the tight competition.”

Of The Nations Trophy, Brandis had this to say: “It’s a wonderful concept, and I would only encourage everyone to continue with it, develop it further and ensure it gets the attention it deserves. I am sure that as it develops it will become more famous and gain in importance.”

It was not easy. Two poor results yesterday had knocked Porron off top position: “We had a chat this morning. I reminded the crew we were able to do this, that we should not be afraid today, that we should keep pushing and enjoy our sailing. The first success of the day was to remove the pressure and have confidence.” Segarra felt the second-place in the first race provided the confidence they needed to complete the job at hand.

ClubSwan 42 European Championship
Nadir’s owner, Pedro Vaquer, was quick to dispel the notion that their victory in the ClubSwan 42 Class Championship had been easy: “I think it is the result of the whole season. We have trained hard, we had a programme and we put together a good team.”

It was clearly a plan well-conceived and well-executed: “The team was new for this year, but we knew the objective from March. It was not easy, though, we had to beat some good teams like Pez de Abril, who won the Copa del Rey. We are just very happy.”

All in all, it was an enthralling event. The battles for the individual championships given an extra piquancy by the over-arching Nations Trophy. The two years to the next time the contest is run will not pass fast enough.