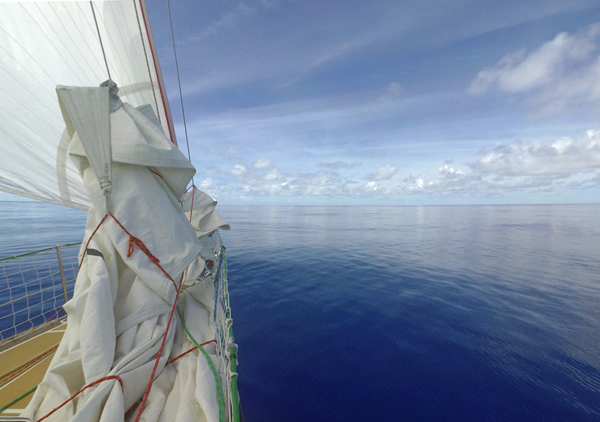 However, it was not a straightforward win for any of the teams. Nasdaq skipper Rob Graham reflects: “The final 50 miles to the Scoring Gate seemed to take forever through light and variable winds, so although we chased hard, we couldn't catch Visit Seattle and Garmin which got through the Scoring Gate ahead of us – well done guys.”

Across the Clipper Race fleet, however, it is the highly anticipated trade winds that are at the forefront of minds today as the pack continues to fight its way slowly through a wind hole.

There has been change yet again on the leaderboard and at the time of writing, it is Qingdao that takes the top spot today followed by Dare To Lead in second and Sanya Serenity Coast in third.

Qingdao skipper Chris Kobusch reports: “The three-watch system that we introduced seems to have worked quite well so far, but we will only see just how well it works once we have a bit of breeze again and are back to sailing the boat in normal conditions.

“Hopefully tomorrow this time I will be reporting fast boat speeds and exciting downwind sailing with the spinnakers up. Fingers crossed!”

Although, with such fickle winds and the proximity of teams to the rhumbline, it is likely podium positions will change frequently over the coming 24 hours.

HotelPlanner.com is in fourth place today, its highest position on the leaderboard since The Forever Tropical Paradise race began ten day ago, and is followed by two of the three most westerly teams, Visit Seattle (in fifth) and Garmin (in sixth) whose skipper decided to break away in favour of the Scoring Gate opportunity.

Skipper of Garmin, Gaetan Thomas is looking forward to the appearance of the trade winds, and hoping that the tactical decision to stay west doesn’t backfire. He says: “Hopefully, when the trade winds do arrive, it won’t take us too much longer to feel its effects than the other boats and I imagine that we will see the fleet compacting slowly again”.

Seventh place goes to PSP Logistics, which is the most north easterly team, and eighth placed Unicef is following a very similar course after re-appearing from Stealth Mode where it has made good progress in comparison with other teams over the last twelve hours.

For PSP Logistics, the weather conditions have started to look up, with skipper Matt Mitchell reporting: “The wind shift that we have been waiting for has finally arrived meaning we are pointing exactly where we need to get to, now we hope only a short wait before the wind increases to really push us on our way.”

Liverpool 2018 also activated Stealth Mode yesterday and has come out in ninth place but holds a more central position in the pack than 10th placed Nasdaq which is over near the rhumbline.

Nasdaq skipper Rob Graham is happy with the Scoring Gate success, but is nevertheless sceptical as to whether the tactic will pay off in the long run. He explains: “We have been heading west through more settled wind, still in company with Visit Seattle and Garmin which are visible by AIS and eyeball.

“The three of us have obviously picked a very different weather routing strategy to the rest of the fleet spread out NE of us, and we may not find out which worked better for several days yet.”

Whilst it is currently unclear as to which tactics will prove to be the most advantageous, Clipper Race Meteorologist Simon Rowell explains that we may see the results over the next 24 hours. Simon says: “By tomorrow, the fleet should see some more serious progress, and will likely cross a band of increased squall activity trailing behind the low-pressure system.”

Further back in the fleet, GREAT Britain skipper, David Hartshorn, has praised his crew for keeping up morale despite the frustrating conditions: “The wind, or rather lack of it, has been very frustrating over the last 24-36 hours and our slow challenging process north could have made any crew switch off. I have been really impressed with the work the GREAT Britain team has put in to keep us moving.”

Looking ahead, teams will be thinking tactically about the upcoming Elliott Brown Ocean Sprint and then the last section of the race onwards to Sanya.

Keep up to date with how the incoming trade winds affect the fleet and its progress, towards the Elliot Brown Ocean Sprint via the Clipper Race Viewer and hear more from the skippers and crew on the Team Pages.

Race 7: The Forever Tropical Paradise Race will finish in Sanya Serenity Marina in Sanya, and the fleet is expected to arrive between 21 – 25 February after roughly 23-27 days at sea. Although the finish line is still almost 3000 nautical miles away, crews are excited to explore Sanya and all it has to offer during the stopover, and you can find out more here.