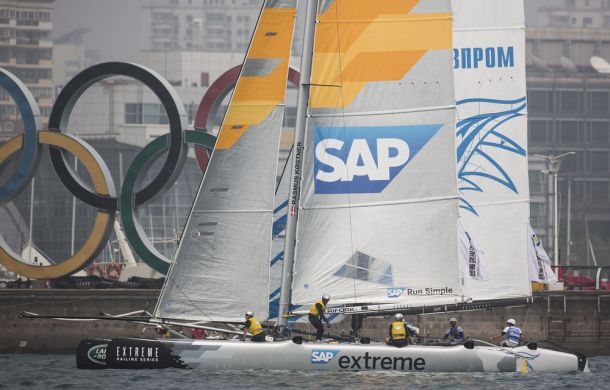 The Land Rover Extreme Sailing Series Act 3, Qingdao came to a nail-biting conclusion today, as SAP Extreme Sailing Team took their first ever Act win – and just for good measure, they scooped the Land Rover Above and Beyond Award for their outstanding performance as a team in China.

After two days racing in dense fog, Danish co-skippers Jes Gram-Hansen and Rasmus Køstner were dominating the Act, and had a 23-point lead going into the final day. However, Qingdao was not going to let the Danes run away with the lead that easily.

For the grand final, blue skies and a complete 180-degree wind shift greeted the teams, blowing from the north and shooting bullets of breeze (anything from 3-20 knots) through the city skyline and hitting the racecourse at unpredictable angles.

The change in conditions looked to have set the leaders off their pace, but the Danish were able to capitalise on their outstanding performance over the three days of racing – that included 14 podiums, 5 race wins – to keep the chasing pack at bay. “It was fantastic for us to win our first Act, something that we have wanted to do for a long time and have been very close to doing a few times but today it finally came together,” explained a visibly thrilled Jes Gram Hansen before stepping on stage, “We are proud to represent our country and also proud to win here because we have received a lot of support, not least from SAP, but also from friends and family back home, which is just fantastic.”

In the chasing pack the battle was on for the remaining podium positions, between The Wave, Muscat and Gazprom Team Russia – and the deciding moment came in the final race. Needing to keep a four-boat gap on leaders SAP Extreme Sailing Team, the young Russians had the Act win in their reach but a penalty at the windward mark cost them not only the Act but second place too – Phil Robertson, Igor Lisovenko and the team settling for a hugely admirable third place – their first podium position since joining the circuit. “We feel a bit unlucky, but clearly stoked with third overall,” explained Robertson. “It’s a big step for the team, especially coming out of Oman when it wasn’t our best event. We took a lot away from that Act, put it into play and got way better every day here. So the boys are very happy.”

The 2015 Extreme Sailing Series now heads for the UK for Act 4, Cardiff presented by Land Rover, 18-21-June, as the Series approaches the mid way point on the eight Act global tour.