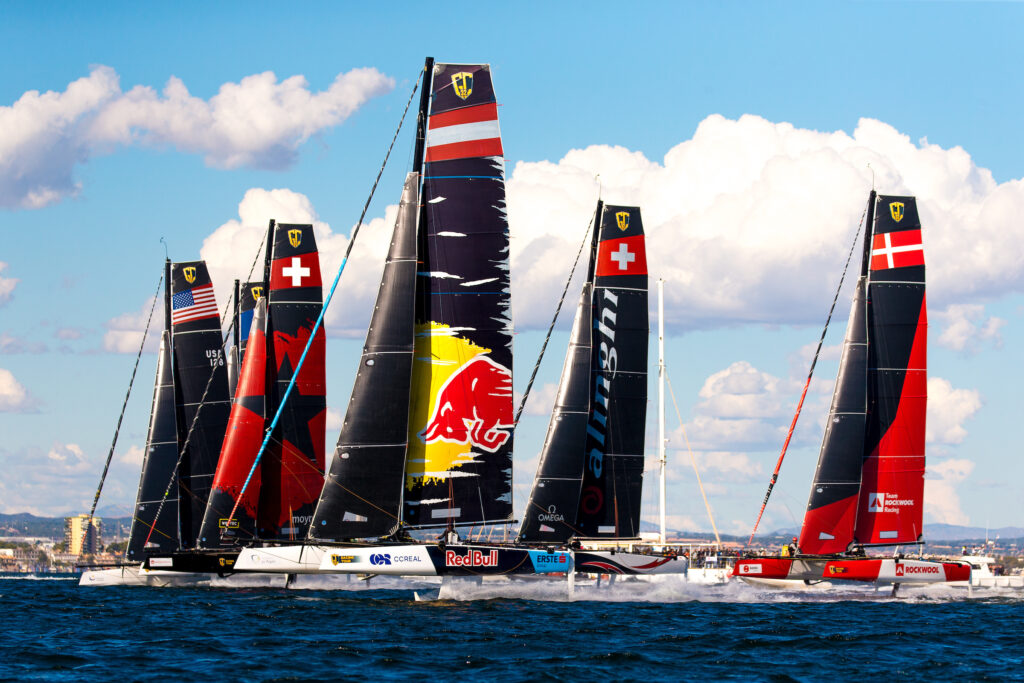 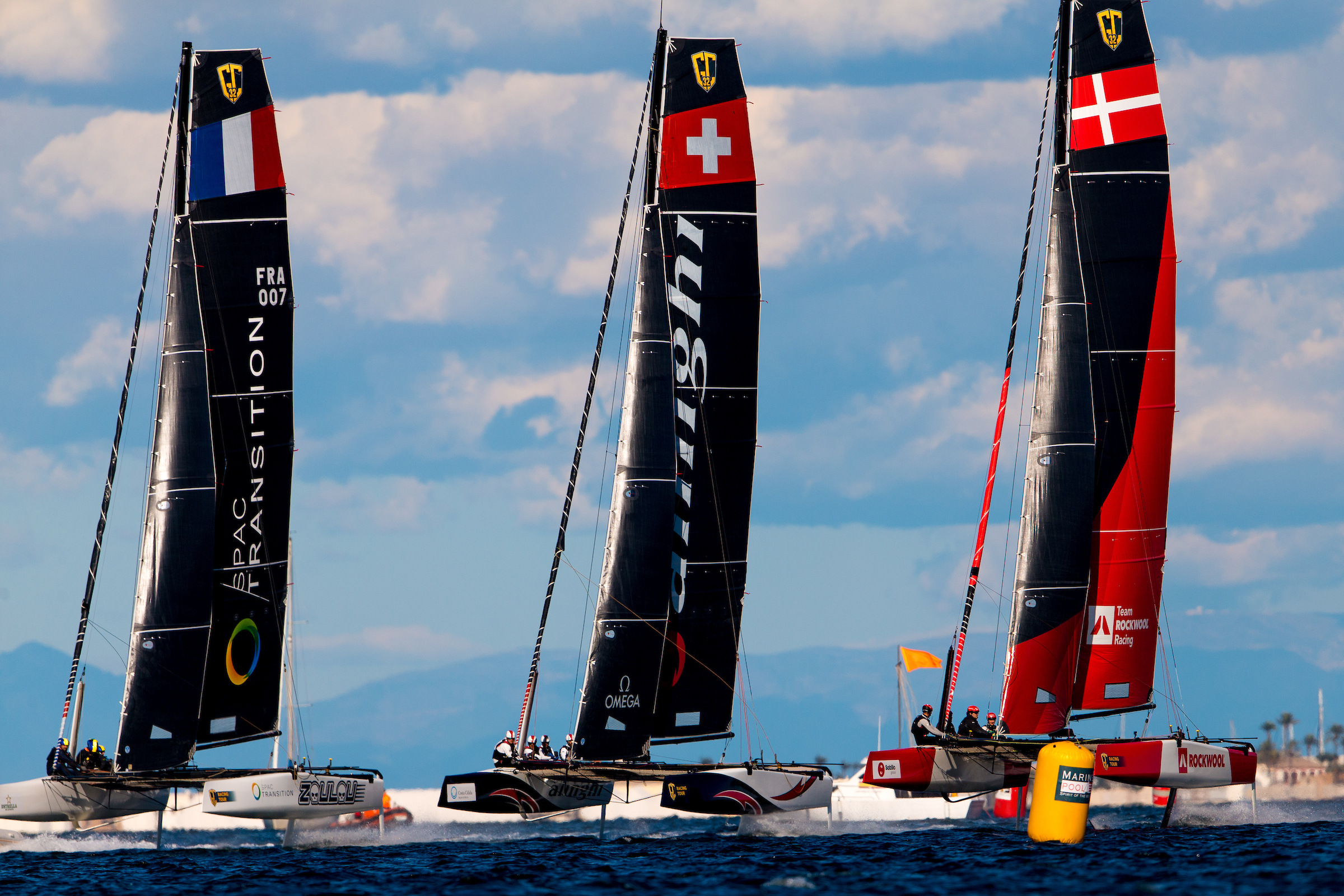 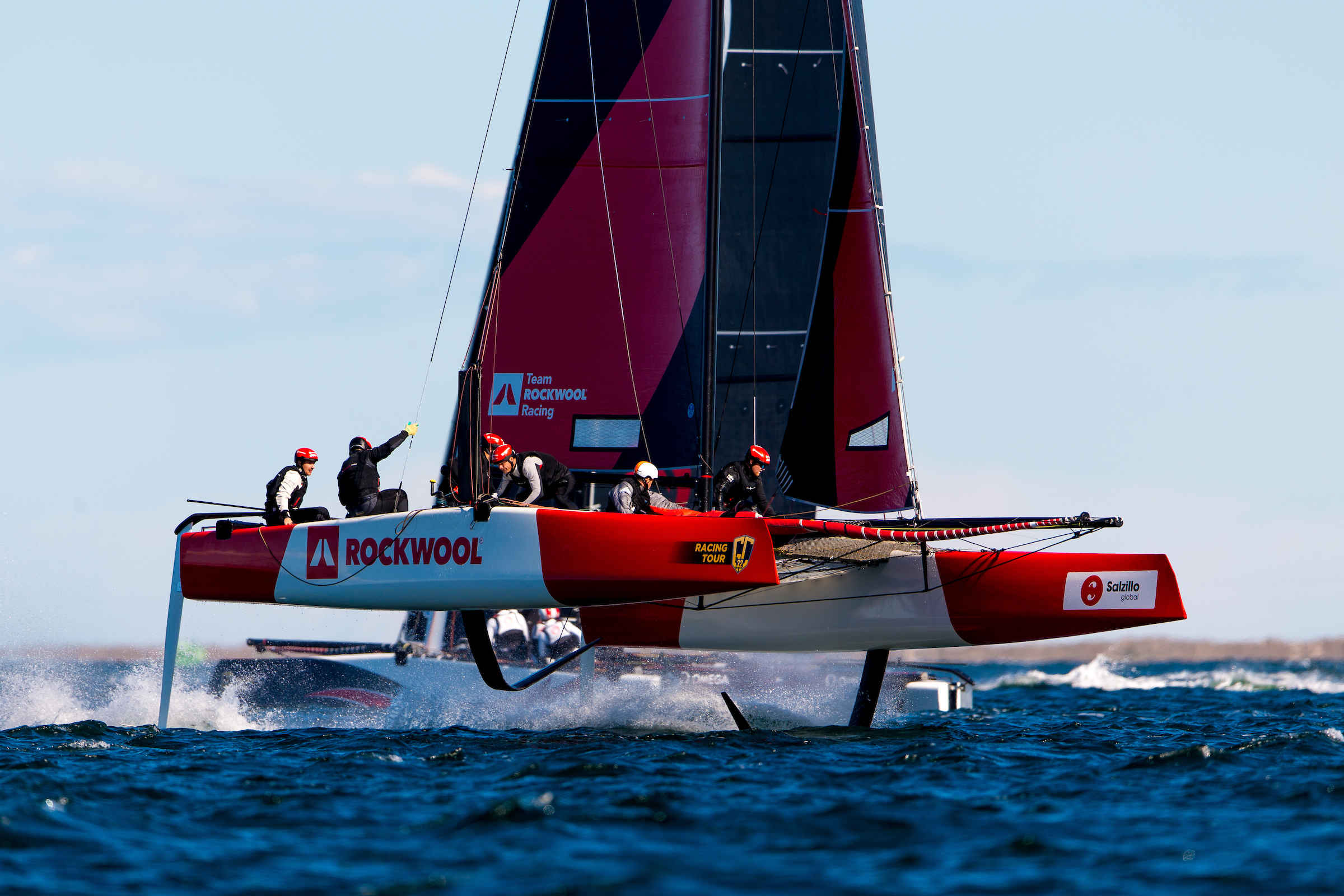 Murcia’s Mar Menor enabled three perfect races to be held on the opening day of the GC32 Mar Menor Cup, the final and deciding event of the 2021 GC32 Racing Tour.

Coming ashore at the Club Náutico Lo Pagán, two of the race favourites, Alinghi and Black Star Sailing Team, are tied on equal points with Ernesto Bertarelli’s team ahead on countback. Behind them – owner-driver, Frenchman Erik Maris and his Zoulou team are in fourth place but on equal points with Roman Hagara and Hans Peter Steinacher of the World Championship-winning Red Bull Sailing Team, holding third.

However, such is the level of competition within the GC32 Racing Tour fleet, combined with the conditions and state of the racing, that a clear lead was a rare commodity today. At various times, every team led, including the back markers, the Danes on Team Rockwool Racing and Argo, featuring a team led on this occasion by World Match Racing Tour and M32 champion, US Virgin Islander Taylor Canfield.

The near landlocked lagoon on Spain’s Costa Calida, separated from the Mediterranean by the thin strip of sand known as La Manga del Mar, is proving a unique race track for the flying catamarans. It has the potential to be windy and shifty, but not as shifty as an alpine lake. And the water is flat.  As Team Rockwool Racing’s tactician Rasmus Koster observed: “You couldn’t design a place that was better for foiling boats. We are impressed with it. It has been good.”

The first races were held in 13-15 knots from the northwest, more than enough for the race committee to set up reaching starts in the middle of the lagoon. In the first, as expected, the GC32 veterans on Ernesto Bertarelli’s Alinghi, were first across the line. They flew into the reaching mark to hold a solid lead at the leeward gate.

However Black Star Sailing Team did well on the right of the beat and after Alinghi had to duck them coming into the top mark, Christian Zuerrer’s team was ahead. Then on the second upwind, Black Star got a taste of her own medicine as Alinghi used her starboard tack advantage to recover her lead.

In race two Roman Hagara sent Red Bull Sailing Team off across the line at pace to lead around the reaching mark and at the leeward gate. But the beat was again tight and, once more, Black Star Sailing Team edged ahead using her starboard advantage. On this occasion it was Zoulou on the left which appeared most threatening up the second beat but Black Star did enough to cover and then stayed in front to the finish.

Everyone was approaching the line early in race three and it was Argo, the underdogs, down to leeward that pulled the trigger the best to lead at the reaching mark and into the leeward gate. However going left up the next beat, the US team lost the lead to Zoulou which went right. Then Maris’ team tacked short of the starboard layline, leaving Team Rockwool Racing, that had gone beyond layline, to edge ahead at the top mark. Sadly for the Danes at the end of the second run, the wind turned patchy and, circumstances going full circle, it was the lake specialists on Alinghi that took the lead, holding it to the finish.

An attempt was made to run a fourth race with an upwind start, but the wind disappeared and the fleet was sent ashore.

“It was challenging for the tacticians,” admitted Alinghi’s tactician, 470 Olympic bronze medallist, Nicolas Charbonnier. “There were many big shifts that were hard to see and we don’t really know the place or its trends or where it is good to go. Plus the fleet is really compact – it is challenging, but really, really good racing.

“The Mar Menor is a really nice place. The absolutely flat water is perfect for foiling because it is safer and we can go faster.”

After his team’s disappointing performance at September’s GC32 World Championship in Villasimius, Christian Zuerrer was happy today with his Black Star Sailing Team’s performance. “We made some good come-backs and made the right decisions. Unfortunately, we didn’t do that well in the first race, but we learned and we did it better on the second and third races. To come back was the most important thing.”

The GC32 Mar Menor Cup is being supported and hosted over the next four days by the Club Náutico Lo Pagán with the support of Turismo Region Murcia, Autoridad Portuaria de Cartagena and local municipalities San Pedro del Pinatar, Cartagena, San Javier and Los Alcázares.

Racing resumes with a first warning signal scheduled for 1300 CET tomorrow and continues until Sunday when the 2021 GC32 Racing Tour champion will be crowned.