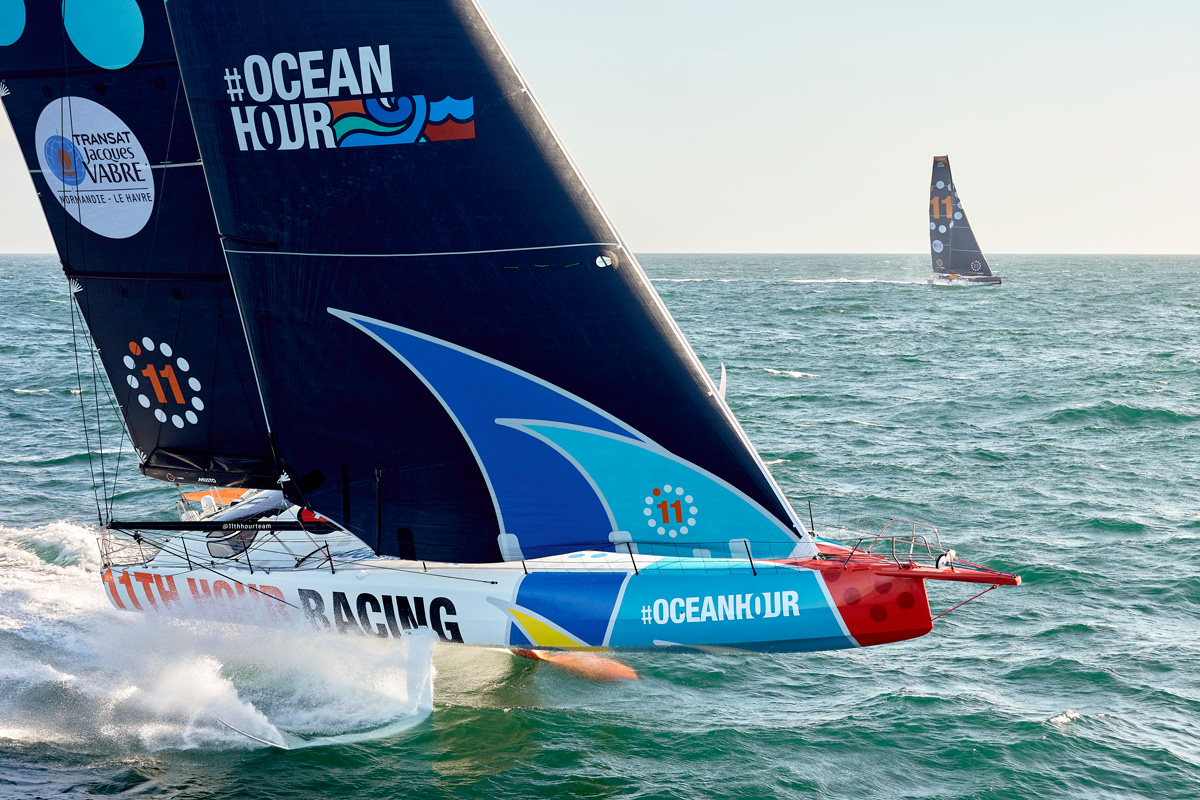 11th Hour Racing Team will become the first competitors in the history of the race to enter two yachts in the IMOCA Class. Pic - Thierry Martinez / 11th Hour Racing

11th Hour Racing Team is getting ready for take off on the Transat Jacques Vabre offshore transatlantic race, starting on November 7 from the French port of Le Havre.

Taking part in the 5,800-nautical mile marathon (10,750 kilometres), which finishes in Martinique in the Caribbean, 11th Hour Racing Team will become the first competitors in the 28-year history of the race to enter two yachts in the IMOCA Class.

Launched in August of this year, 11th Hour Racing Team’s Mālama is the newest boat in the IMOCA 60 class and the first specifically built to be raced by a crew of up to five sailors, combining state-of-the-art technology with a desire to drive innovation for positive action on ocean health within the sport.

US sailor Charlie Enright, who will co-skipper the boat together with Pascal Bidégorry (FRA), said they were both feeling excited and nervous as the Transat Jacques Vabre start draws nearer: “With the boat being so new, we have had very little time to train and to get familiar with Mālama’s features – less than two weeks on the water.

“The foils, the hull shape, the cockpit, she’s definitely one-of-a-kind. For this race, our main focus will be to get her to Martinique in one piece – if we manage that, there’s a chance for more!”

The Enright/Bidégorry duo took part in the last edition of this biennial race in 2019, finishing fourth in the IMOCA Class. But for fellow 11th Hour Racing Team skippers Justine Mettraux (SUI) and Simon Fisher (GBR), who will sail the team’s 2015-generation boat Alaka’i, this will be their Transat debut as a pair.

One of the most accomplished female sailors of her generation, Mettraux is looking forward to getting going. “Simon and I started sailing double-handed together this summer, and it’s been great so far,” she said. “We really complement each other well and are proud of what we have achieved as a team – a third place in the Rolex Fastnet Race and second in the Défi Azimut 48-hour race this past month.

“Sailing a transatlantic race of up to 16 days definitely steps things up a few notches and both Simon and I feel confident about taking on this challenge.”

One of five mixed male-female teams within the class of 23 boats, Mettraux and Fisher are currently on top of the leaderboard of the IMOCA Globe Series, the class championship that runs from the end of one Vendée Globe round-the-world race to the end of the next one. After a strong start to this season, they are amongst the favourites to win the Transat Jacques Vabre, despite the fairly short time they have been sailing together.

“We are trying not to put too much pressure on ourselves for this race but we’re hungry for more success after our recent performances. However, with the standard of the fleet assembled we know this event is going to be much more challenging than anything we have seen before and we will have to sail incredibly well to get on the podium,” said Fisher.

“It’s a huge opportunity for us to race against the best in the world and I especially look forward to some healthy competition with our 11th Hour Racing teammates, Charlie and Pascal,” he added.

The two 11th Hour Racing Team crews will set off on November 7 from Le Havre and head out across the Atlantic, the second largest ocean on the planet, before turning south to round Fernando de Noronha, a volcanic archipelago 190 miles off the northeast coast of Brazil. The fleet will then turn northwest and head to Martinique, part of the Lesser Antilles, and finish at Fort-de-France.

The Team’s title sponsor, 11th Hour Racing is, for the first time this year, an official partner of the Transat Jacques Vabre, supporting a series of initiatives within the Race Village to engage the public on tangible solutions to restore ocean health.

This collaboration bolsters the Transat Jacques Vabre’s enduring commitment to environmental and social responsibility and aligns with the Team’s mission to inspire change within the marine industry with positive action for ocean health.