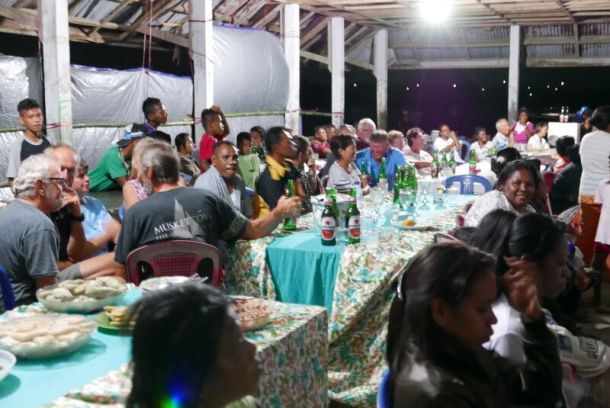 Participants in this year’s Multihull Solutions Wonderful Sail2Indonesia Rally have arrived in Indonesia after clearing out of Australia at Thursday Island in the Torres Strait, and experiencing a dream run across the Arafura Sea. The 48 participants will spend the next 4 months exploring the Indonesian archipelago and enjoying the hospitality of a variety of regencies along the route.

Debut’s large and well protected harbour was the arrival port for this years Rally, and formalities were “smooth and trouble free” according to one new arrival. Raymond Lesmana, Island Cruising’s Indonesia Rally Control, said the people of Debut and the neighbouring villages were proud to be the first Indonesian hosts and extended a very warm welcome, delivered with considerable tradition and ritual. The rally participants were officially greeted by colourfully dressed local men, women and children who were genuinely excited to see so many cruising people arrive to sample the delights of their country. A tour of the local school followed, where the school kids had been preparing for months, learning how to introduce themselves in English and ask for the names of their new-found friends. “I think we were the highlight of the year,” said one participant. “It was unbelievable and really touching how much effort this little town put into welcoming us.”

Another rally participant waxed lyrical about the locals – “As we pulled up to the dock there were local guys there to help and it was amazing. You could literally pull up to the steps, hand your line over and have “valet” dinghy parking. This went on everyday and when you would return the kids would pull your dinghy back over to the steps for you, no fuss and no asking for a tip or anything.”

Photographs with the cruisers were sought after, especially with the younger crew members who quickly got past the language barrier.

The local government hosted a gala dinner for participants – echoing the interest and commitment shown by the Indonesian Government in Cairns before the rally left, keen to foster more cruisers in Indonesian waters. The gala dinner featured tables laden with local food and produce, much to the delight of the participants.

A highlight for many was a parade including the Rally participants and locals with banners down the main street. School children of all ages were bearing gifts of food, holding hands and laughing while local troupes of dancers in traditional dress entertained. This “day of the people” continued on into the night, where participants once more were treated to a local feast, prepared entirely by the local women.

The rally participants will now cruise through the Banda Islands before assembling at Namrole, Southern Buru regency for more festivities.