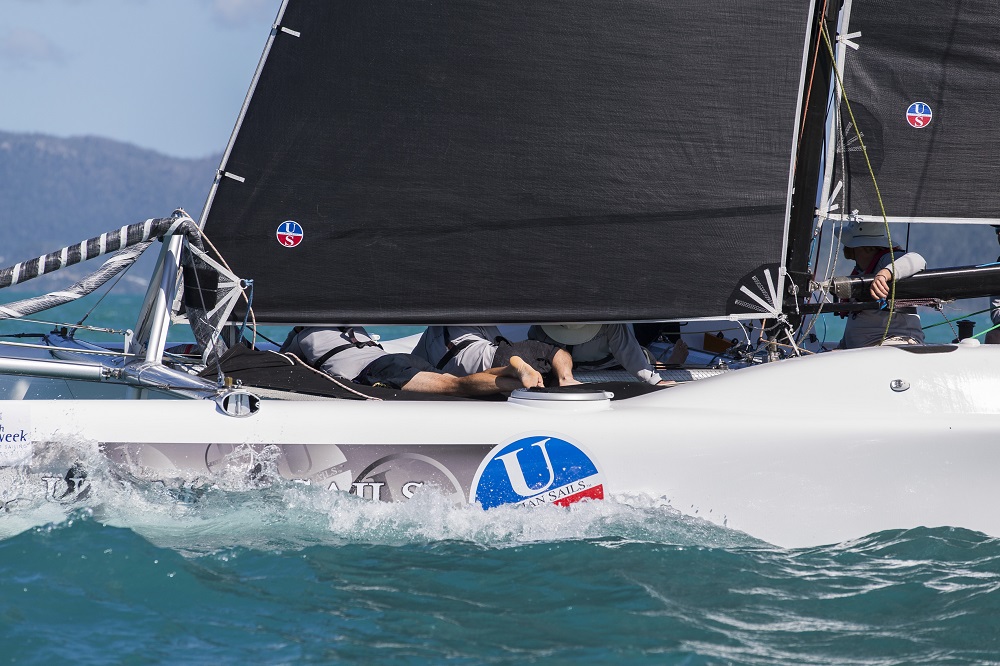 There is a big gap to third place, MCJAK, the Diam 24 owned by Shaun Jackson, is 11 points behind. Sadly, the wind required to make MCJAK and Fury Road fly, has been lacking. Pity, as they would be spectacular downwind in a big breeze.

Back to the leader, Mitchell purchased last year’s Multihull winner, APC Mad Max from Tony Considine, renaming her Ullman Sails and so far, has protected the Grainger Appex’s reputation.

He says: “It’s a small fleet but a good one – the Diam 24 is the latest in design,” he says of the new trimaran, Fury Road, from the drawing board of France’s VPLP (Van Peteghem Lauriot-Prévost), designers of the largest and fastest offshore trimarans in the world (including MCJAK). They also notably designed Comanche, the super-fast super maxi.

“I purchased my multi (a Tony Grainger designed 10 metre cat) from Tony Consadine last year – I had previously sailed on Cynophobe and various other multis like that,” said Mitchell, who is better known as a monohull sailor, including the fast 505 class.

“I love the speed of a multi – it’s obviously sailing is going that way. I have winglets on the rudders, but no lifting device at all,” he says.

Sadly, the breezy conditions that Airlie Beach Race Week is known for, has been mostly lacking, meaning these normally fast boats are deprived the opportunity of flying one hull at warp speed.

“Nevertheless, we knew it would be a close battle here. I have a good crew – Hayden Turnbull, Aaron Linton, Clayton Matthews and Derek Holroyd – and new sails,” says the sailmaker.

Of Darren Drew’s Crowther 50 Cat, Top Gun, which hasn’t performed as one would expect, Mitchell says: “There hasn’t been enough breeze for her to do well – she needs good breeze and it’s been light.

“On the other hand, light to medium air suits us, so the regatta has been good for us so far.  This is our first major regatta with the cat. We’ve only done club races to-date.”

The Whitsundays sailor doesn’t rest on his laurels. “Aaron (Linton) and I are on plane on Friday for the J111 Worlds in San Francisco, then we’re packing up in a couple of weeks’ time for Brisbane to do Multihull Nationals.

In Cruising Division 2, Carol Roberts is skippering Infarrction, “We have four ladies and three blokes on my boat,” she says, and plan A is to stay ahead of her husband Ronnie, who is sailing on Treasure VIII.

“We have a scratch crew, one of which had never seen a spinnaker up until this regatta, while Ronnie’s on a gun crew. We are doing our best to beat him!”

And her wish was coming true until Tuesday when Infarrction finished 14th and that damn Treasure VIII (owned by Robert Davis) was third, so overtook Roberts on the leaderboard. But the two are close in 12th and 14th places respectively.

And the name, apart from the obvious, (Infarrction is a Farr 1104)?

“We were looking for names that had ‘ar and double r’ (the double r’s come from my husband Ronnie and me, Roberts) in them and thought: ‘spinnaker infarction, halyard infarction etc., so it just seemed to fit.

According to Wikipedia, ‘infarctionis tissue death (necrosis) due to inadequate blood supply to the affected area’, so I guess there is a parallel.

Antigua was launched in Finland in 1976 and has circumnavigated the world twice. She spent many years cruising the Mediterranean and Indian Ocean before moving to Phuket where her Victorian owner Phil Sexton purchased her.

Arriving in Australia in 2014, she had been based in The Andaman in Langkawi, but now calls Abell Point Marina at Airlie beach home.

Her counterpart, Eve, is the 35th of 40 yachts built by Nautor in the seventies and early eighties. Originally launched in 1981 as Cheetah of Hamble and was UK registered before being Italian registered as Kenta from 2000.

Steve Capell imported the yacht to Australia, where she has taken up residence in Sydney and will contest the Rolex Sydney Hobart for a second time in December and given the right conditions, Eve still has race-winning form.

The two Swans might not be the fastest boats in the light air, currently placed 11th and 12th overall, but their classic beauty more that makes up for that.