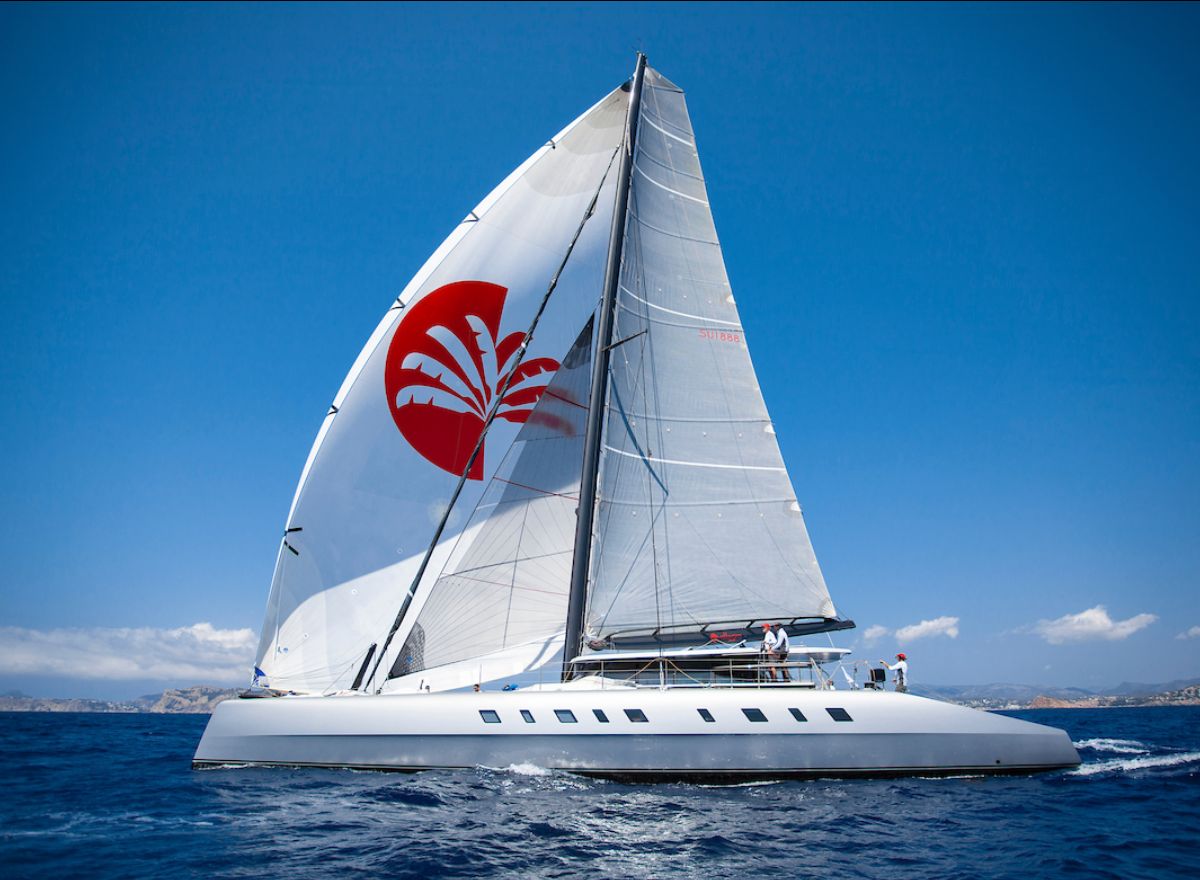 The all-conquering Allegra took a clear-cut victory at the 2021 Multihull Cup in Mallorca today after another high tempo performance out on the race course secured her third straight race win.

Sailed by Switzerland’s Adrian Keller, the 84’ Nigel Irens design eased her way to the front of the fleet of performance cruising catamarans to again take line honours and win her second Multihull Cup title in some style.

In a close finish for the overall runner-up spot, the British-flagged Coco de Mer pipped her fellow Cup regular R-Six to second place, both ahead of Highland Fling XVII which was making her debut at Multihull Cup.

Speaking at the Port Adriano prize-giving Allegra’s delighted tactician Paul Larsen said: “It’s nice when everything works and we had a fun time doing it in great conditions – we’ve had a little bit of everything here and the race committee did a great job.

“The boat has been evolving and there just aren’t any gaps in the knowledge anymore, and everyone knows what to do, so we are sailing to the numbers and it’s delivering results.

“We love having our cage rattled, and Highland Fling certainly did that at Lora Piana, so we came here ready to put on a good show, and all the other boats are lifting their game, just look at Coco which was nipping at our heels as well.”

And Larsen said he anticipated the growing interest in performance cruising catamarans would continue increasing: “Looking ahead there are so many good designs out there and a lot of people coming to it.

“Here we are showcasing what they are capable of out on a racecourse without compromising the level of comfort, so it is truly a dual-purpose boat that does fantastic cruising and amazing racing as well.”

Racing in moderate conditions today saw the fleet start in an easterly with a beat to the first turning point on the course, the rocky promontory of Cap de Cala Figuera and its distinctive black and white lighthouse.

The fleet was then able to bear away to the first turning mark, the tiny islet of Ilot de Sec in the Bay of Palma, and then run off west for another gybe-fest to the laid mark off Cabo de la Mola before heading back to the finish.

When the results came in Coco de Mer took second, with Highland Fling overhauling R-Six to take the last place on the final day podium, if not the overall.

Having targeted a second place overall at the start of the final day, the crew of the Morrelli & Melvin designed Gunboat 66 Coco de Mer finished the Multihull Cup with a smile on their faces. “Allegra were worthy winners and they didn’t really put a foot wrong, so it was great to take second,” said tactician Tim Thubron.

“There are no slouches in this fleet and every boat has been sailing well, and it was very close, tight racing, especially between us and R-Six over the three days.

“It has been a classic case of ‘champagne sailing’, with great wind, shorts and T-shirts, it doesn’t get any better than this really. The rivalry between the teams is very friendly, but equally there’s not an inch given on the racetrack, just good, clean, fair and competitive racing.”

It was a sentiment echoed by their Polish rivals on R-Six, a 67’ Morrelli & Melvin design from Hudson Hakes Marine. “It was a great event for us and the opportunity to race and train against other sailors has been priceless,”said helm Robert Janecki.

“We aimed to go out and fight today but unfortunately we made a couple of mistakes, and seeing Allegra doing so well showed we have plenty of room for improvement. Nevertheless we fought to the end and it has been great to be here.

“We are definitely planning on being back next year, everyone who organises this are just like family to us.”

Meanwhile, though disappointed with their overall standing, the Highland Fling team are also looking to a return match next year.

Cam Appleton, Tactician on the VPLP designed Gunboat 68, said: “Congratulations to Allegra – it was good fun racing and a really well-run event, and we appreciate all the hospitality and Andrea’s foresight in putting the regatta together.

“We weren’t as competitive as we’d hoped to be. We have a few things to improve on and our performance against our rating is something we need to take a look at, and refine and develop moving forward now that we have a better knowledge of the boat.

“It has been great and the multihull fleet is sure to grow and become more competitive, and it’s a date in the diary for next year for sure.”

Amid celebrations at the Sansibar Wine bar and restaurant in the Port Adriano base, Multihull Cup Event Director Andrea Grimm said: “The whole team here are just delighted that the owners, their families, guests, skippers and crews have had a great time with some competitive racing in fabulous conditions.

“As ever we are grateful for the strong backing of our supporters, including Marinepool and Rigging Projects, whose sponsorship of the Clean Waves refillable water station and reusable bottles here in Port Adriano has reinforced our status as a Sailors for the Sea Clean Regatta.”

The fifth edition of the Multihull Cup is scheduled for next September and dates will be confirmed soon.