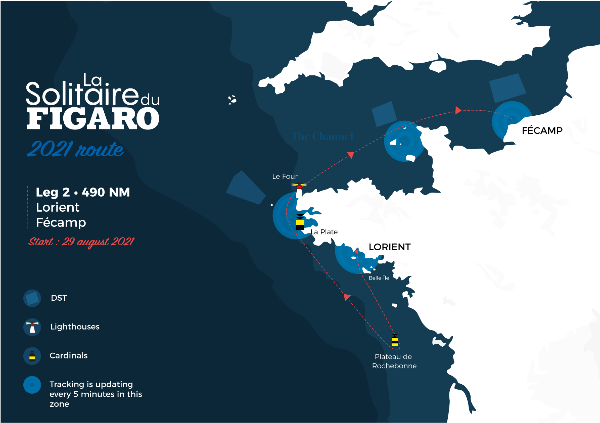 The 490 nautical mile Stage 2 of the 52nd La Solitaire du Figaro, from Lorient to Fécamp, starts Sunday afternoon and it is a tricky, technical coastal stage requiring the passage of key tidal sections, such as the Raz de Sein and the Raz Blanchard.

There is also a potentially hazardous finish in along the high cliffs to Fecamp.

Meteo specialist Britain’s Will Harris, top rookie in 2016 and 22nd in 2019, introduces the leg: “After quite a close Leg 1, Leg 2 of will be certainly open up some time gaps in the fleet. Passing several notorious tidal gates, you can be sure everyone will want to be in contact with the main peloton from the start to be sure to not get left behind.

“In terms of the overall weather situation, we have had a stationary high pressure sat to the north of Ireland for the past week. It looks like it will stay there for the entirety of Leg 2 which will mean North-Easterly winds. It’s not a typical situation to have winds from this direction for such a long time.

“It means there is a lot of upwind. Once around the corner of north-west France, it is a beat all the way up the channel to Fecamp. Looking back at Leg 1, at the big upwind all the way back from La Corogne, we saw some boat speed gains being made by Pierre Quiroga (Skipper MACIF 2019) and also the Leg 1 winner Xavier Macaire who extended his lead to the finish.

“We may see these two doing something similar again, although with the complicated tides in the Channel, and the element of strategy will be more dominant compared with boat speed.

“After leaving Lorient, competitors will probably have their only spinnaker run, to Rochebonne, in medium north-east winds. With this direction, this wind tends to decrease in the daytime, as the land heats up. It then increases quite strongly overnight, as the land cools and enhances the gradient breeze.

“By the time the fleet reaches Rochebonne around midnight, the wind should be above 20 knots, and the boats will spend the rest of the night on a reach towards the Raz du Sein. They will all be quite close together at this point, since it is straight line sailing and predominantly about boat speed.

“When the boats reach the first tidal gate of the Raz du Sein, it seems their timing will be quite favourable, and they will carry it with them. But it could also mean the small splits in the fleet will open.

“The first boats will touch the stronger positive tide first and extend. But also, later on once they are round the north-west corner of France, they will hold onto the positive east flowing tide for longer than those behind since the tide changes in the west first.

“Competitors will now be into their long beat up to Fecamp. The next real opportunity will be in the strategy to get through the Straits of Alderney. Here, the tide can be up to 9 knots, which is 1.5 times faster than what a Figaro 3 sails upwind. If one boat has to deal with 9 knots of negative tide, even only for 30 minutes more, that could be a 4.5-mile loss. It will be crucial to get this section of the course right.

“Depending on the timing with the tidal cycles, generally it is best to approach from the south in the shelter of Cherbourg peninsula, when the tide is negative to avoid the strongest parts. Equally, if the tide is positive as the fleet approach the straights, we could see some of the field further behind miss the tidal gate. This means small gaps turning into much bigger ones.

“We will possibly see some splits in the fleet here, as different strategies are played out. Alexis Loison (Region Normandie) is always a good one to watch around here. He knows the currents perfectly to play in his favour.

“The best situation to be in will to have already been in the lead after rounding north-western France. It means should the timing at Alderney play in your favour, you could find yourself gaining a lot of time.

“The final 70-mile section to the finish will be relatively straightforward and the positions will mostly be decided before this point.

“It will be worth giving your all before you round the Cherbourg Peninsula and not leaving much in the tank for the last bit. Although the wind is quite stable for this leg, with no shutdowns expected, the two major tidal gates are sure to make it an exciting leg for the overall win.

Follow the departure from Lorient:
11:00am presentation of the skippers on stage in the village, followed by departure.