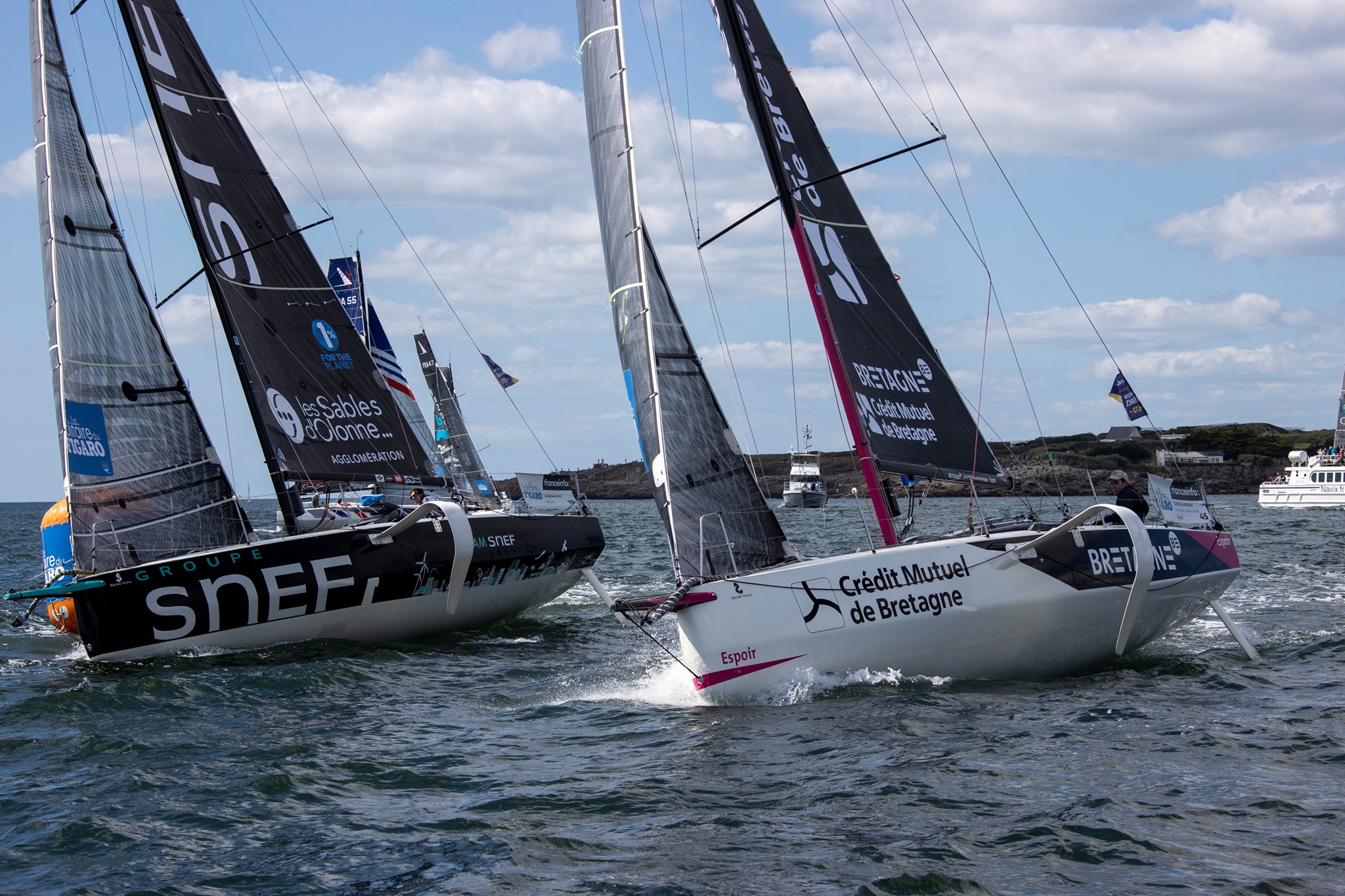 After only a few days rest, sailors were back in action on Sunday afternoon for the start of Stage 2 of the 52nd La Solitaire du Figaro, an intense 490-nautical-mile coastal passage.

From this afternoon’s Lorient start there is a 100 miles downwind passage to a turn at Rochebonne – a rocky plateau off Les Sables d’Olonne – after which the 34 strong fleet should follow the rocky Breton coastline, passing around the Cherbourg Cotentin peninsula and then east into the English Channel to a finish at Fécamp, just east of Le Havre.

The stage is of a ‘classic’ type for La Solitaire du Figaro, unrelenting, intense and demanding with little opportunity to rest. Periods when key tactical decisions need to be made occur later in the leg, when real tiredness prevails and lucidity becomes ever more elusive.

After the start it was Tom Laperche (CMB Bretagne Peformance), France’s prodigiously talented 24-year-old, who led the fleet around the four-leg circuit, bypassing all the main headlands and beaches before heading southwards under spinnaker.

Switzerland’s Nils Palmieri (Teamwork) led the fleet at the first two marks of the course before succumbing to Laperche’s challenge. And as the stage rolled out into the open water, Italian-American rookie Francesca Clapcich (Fearless-State Street Marathon Sailing) was going well in 14th just over half a mile behind the leaders.

This time it was a reaching start to the first mark before peeling to the big A2 spinnaker for a fast reach followed by an upwind leg under the J2 headsail. It was an exciting, picture postcard spectacle with kitesurfers dashing effortlessly around the hard-working solo sailors.

Lying sixth race out of the bay, the 40-year-old from the Team Vendée Formation, Xavier Macaire (Groupe SNEF) who leads the General Classification was comfortably in touch with young Laperche.

On his eleventh – and he says, final challenge to finally win the La Solitaire du Figaro title which has twice eluded him – Macaire starts this stage with a useful but not impregnable margin of 47 minutes and 15 seconds.

Marcel Van Triest, who advises one of the biggest French ‘Pôles’ or training groups, said, “This is a fairly typical, classic coastal stage which will see the sailors get very little rest. I am not seeing anything really that might be considered a race winning or race losing point – say someone opening a six-hour gap, but this one will keep the sailors working hard and after two hard days and nights they will be making key decisions how hard they want to push their risk.

“There are gains to be made, say cheating the tide but 200 metres more inshore in this instance can make a big difference. But pushing that hard really ups the intensity and stress much more and then there is the risk of literally having nothing left for the last stage.”

Before docking out from Lorient, Macaire said, “I want to do well, to work smart and hard. And to do that I won’t be concentrating on my rearview mirror. Above all, I don’t want to rest on my laurels from the first stage. The goal is to sail well, to navigate well and to continue in my good flow that I have.

“This is a very different course from the first one. It is a coastal race with difficult passages of the tidal stream at the raz de Sein, the chenal du Four, the Breton and Norman coasts, and the Raz Blanchard. It will not be easy because there are a lot of currents, lots of weed and maritime traffic, and local geographic effects because the wind is very changeable.

“It will be interesting and above all we will have to be focused throughout and stay efficient. For example, finding the right moments to rest because there won’t be too many of them and you will have to remain lucid until the end of the stage. This should be a three-day leg, shorter but also more intense than the previous one.”

Ireland’s Tom Dolan (Smurfit Kappa-Kingspan) is the best placed of the seven non-French skippers, starting Stage 2 in tenth place with a deficit of 2 hours and 15 minutes on Macaire but within reach of second and third place. But the 34-year-old who moved to Concarneau, France from County Meath ten years ago, made another lacklustre start and had work to do not long after the start. One outstanding strength he has shown was upwind speed on the breeze windward leg back across Biscay and with these North Easterly winds set to continue through this leg, this will be a primarily upwind stage.

“I have found a good, slightly different jib setting which I have been working on and that seemed to be very good in the breezy upwind stuff and there will be a good lump of that,” said Dolan. “The weather is looking that there might be no really big tidal gates unless we are late leaving, we get stuck a bit at Penmarc’h tomorrow but you never know. Because the wind has been in the North East for so long it might mess up the tides a bit in the English Channel but let’s see.

“This first part has a lot of manoeuvres and so they need to be clean and then you need to be quick tonight. I know this passage to Belle île and to Rochebonne pretty well, I’ve been out there more times than I have had hot dinners!”

Britain’s Alan Roberts (Seacat Services) is lying 22nd, an hour behind Dolan. He was in a positive mindset. Roberts said, “The first leg is gone. I am not thinking about Leg 1 now or Leg 3, it is one leg at a time. I need to sail the way I know I how to and have confidence in my ability.”

Later this Sunday evening the wind is due to drop away before Belle Ile then return in from the North East building to 17 knots for a fast downwind sprint to Rochebonne. The leaders should be at the mark at around 0100hrs Monday morning in 20 knots of wind. All the time the sailors need to be pressing hard to be in the lead group.

Alexis Loison (Region Normandie) said, “Certain routes take us close to Cherbourg right through my back garden! I know the area well and I know the difficulties are many. But overall, this stage is riddled with potential level crossings. We’re going to spend a lot of time in close to the rocks.

“We’re not going to sleep much. The weather situation is quite clear, but small shifts can do a lot. Not to mention that there will be oscillations with the obligation to choose a side of the channel. You will really have to push hard to be up front. We need to be patient, opportunistic… and tenacious!”

The northwards climb starts in 17-20 knots of North Easterly wind, with the breeze moving right to allow speeds to rise slightly. An unstable thermal low develops and the breeze will slacken. Passing Ushant and round the corner into the west of the Channel the wind is more unstable but the seas will be around 1.5 metres. Tides are less of an issue than might be expected. That said the passage across the raz du Sein can still see strong tides.

Tuesday in the western channel the North Easterly wind will be an unstable 17-20 knots with big seas and it may prove beneficial to sail more distance to find flatter water and go proportionately faster. Tuesday afternoon will bring Westerly and North Westerly winds near the Channel Islands before moving back to the northern coast of the Cherbourg peninsula towns. Even across the Baie du Seine there will still be 25 knots of North Easterly upwind conditions. The brisk North Easterly wind should then stay in for a Wednesday morning finish.

Jesse Fielding (USA, Opportunity-State Street Marathon Sailing) said, “Well this leg looks like a cracker, as promised definitely a more historic style classic coastal leg up and around all the way past Brest and round the corner into the Channel and Fecamp. The sailing in along the rocky French coast with shifty winds – even though there is a nice stable weather system over Scotland – is going to be just as challenging as we have all read about before – as foreigners to this scene – so the weather looks good for sailing and the competition is as tough and wild as ever with all that local knowledge throughout the fleet.

“I am planning on just seeing some incredible sailing and hope to be participating in the fleet, high heart rate stuff among the rocks, and plenty risky for me but the strategy is to manage that risk really well, and stay in contact with those who know and hope for an opportunity to make a move when we can, but our goals are the same as always…finish safely, keep the boat in one piece, learn all that we possibly can and get on to the next one!”