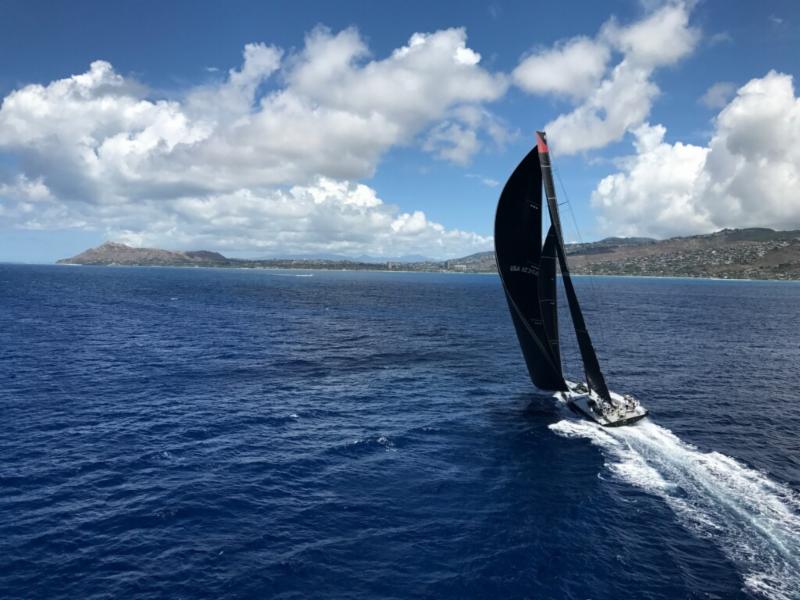 HONOLULU, HI – Due to wind conditions veteran navigator Stan Honey described as a “surprisingly strong breeze,” both the multihull and the monohull first-to-finish race records have fallen in the 2017 Transpac. Over a 2225-mile course that starts from Pt Fermin in Los Angeles and ends at Diamond Head in Honolulu, H.L. Enroe's ORMA 60 trimaran Mighty Merloe crossed the finish line first at 5:02:30 PM Hawaii Standard Time (HST) for an elapsed time of 4 days 6 hours 32 min 30 sec, a full 26.5 hours faster than the previous mark set in 1997 by Bruno Peyron and his team on Commodore Explorer.

In crossing the finish 3 and 6 hours later, respectively, even the next two boats to finish, Lloyd Thornburg's MOD 70 Phaedo and Giovanni Soldini's MOD 70 Maserati, also broke this record.

The next boat to come over the eastern horizon into the Molakai Channel towards the finish was Jim Clark's 100-footer Comanche, and at 11:55:26 local time, they too decisively established a new course record for monhulls with an elapsed time of 5 days 1 hour 55 min 26 sec. This new record is half a day faster than the previous mark set in 2009 by Neville Crichton's R/P 90 Alfa Romeo II.

Skipper Ken Read had high praise for the team, saying “This was the perfect boat with the perfect crew. We did a lot of work to mode this boat to the lowest safety limits of stability and to minimize the weight wherever possible.” This included crew, with only 15 on board (“one for every handle on the grinders”), and sails, which is ironic given that Read is President of North Sails: for this trip the inventory was reduced to a main, masthead Code 0, three jibs two staysails, and – amazingly – only one A3 spinnaker. For an offshore greyhound of this size, its several crew and sails less than normal.

“This was another proof of concept for this boat,” he continued. “we can adapt it to be competitive in any race around the world. We are all just stunned at what this boat can do.”

For navigator Stan Honey this was his 7th first-to-finish achievement in Transpac, and the 4th time he has helped win the Elapsed Time Record Trophy (aka The Clock Trophy) as navigator. The hands on the clock on this trophy will now be set to the new record time.

Meanwhile, blogs from boats a little further from Hawaii have been entertaining us ashore, with the content coming now at greater breadth and depth since the boats are more flat and the conditions more benign. Here is an example from John Miller's Beneteau 46 Tropic Thunder, who started on Monday last week with Division 7 and gives us a slice of life aboard:

“We have been sailing 7 straight days as of 1 pm today. Yet another day of grey skies and grey water. So far we have seen One. Single. Star. We've had some glimpses of the moon but only briefly. The Fantastic Four watch say they saw the full moon but we on the A-Team watch are skeptical. During the day we have all caught sight of this strange glowing orb through the clouds in the sky. We have not yet identified it. At least there has been no rain and no squalls.

July 9: During morning shift change we saw and passed a sailboat on the horizon. That was a pleasant little surprise. In the afternoon, Aaron went up the mast again. For some reason, Beneteau thought square ends on swept back spreaders was a good thing. We started getting a pretty significant dimple in the main. Aaron went up again and applied a patch with a jury-rigged hard plastic center as well as duct tape and chafe guard to the spreader end. The winds for the day built up and there were a couple sail changes to try and optimize boat speed. Trimming and driving was active and challenging. A symmetric kite sure would have been useful.

Overnight we flew the genoa. Wind and wave angles were odd and challenging. The crew was pretty wiped out from the all the effort throughout the past day. The slight down time was much needed.

July 10: At morning watch change the A2 went back up for better speed and boat angles. We are sailing a little higher now due to the wind but still making way. 183 nm 9 am to 9 am.

Today we had our Half Way Celebration. Dinner was pork loin and pineapple with young potatoes and carrots. Dessert consisted of warm lava cake and bad Hawaiian music. It was absolutely delicious. Mother Nature decided to bless us with an actual visible sunset to cap of the day.

Having a blast out here somewhere in the middle of the Pacific Ocean.