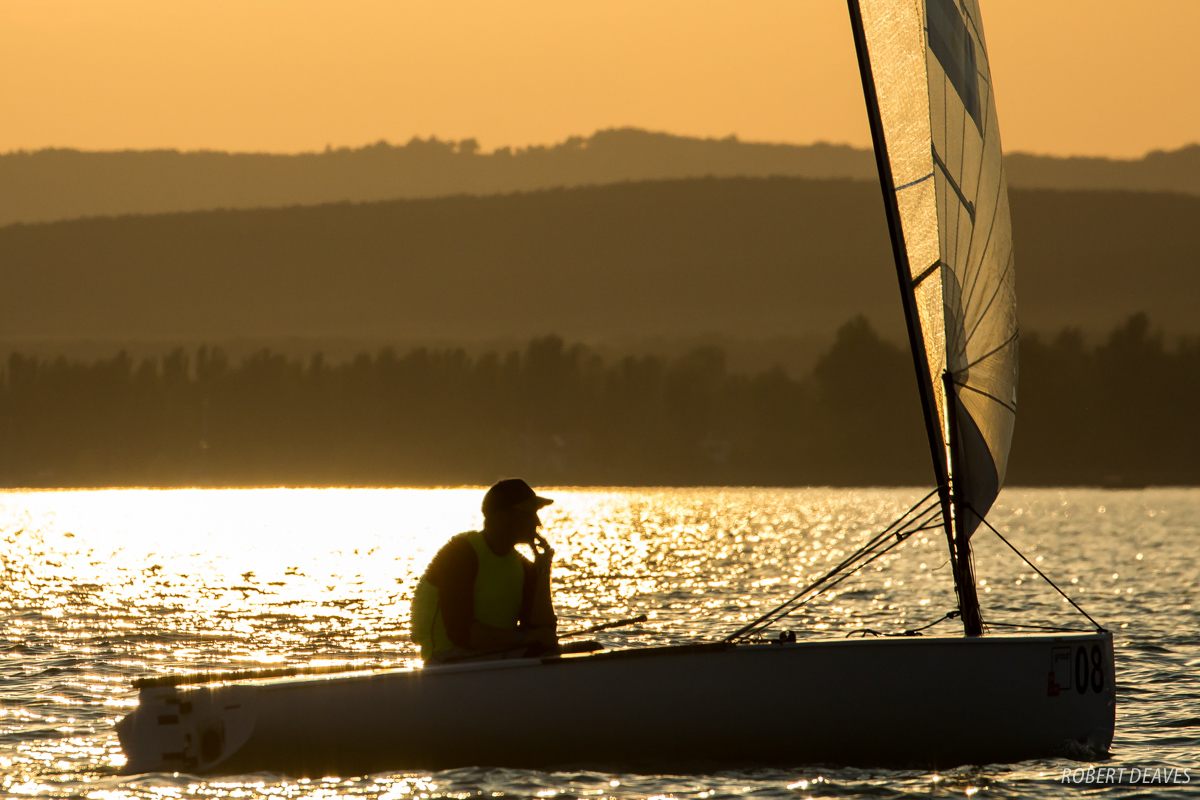 Another long day of waiting for wind was rewarded with two late races on Day 4 of the U23 Finn World Championship in Balatonfüred, Hungary where Finland’s Oskari Muhonen won the day to lead the fleet by five points – he very nearly won both races.

Facundo Olezza, from Argentina, had a day to forget and dropped to second, while Fionn Lyden, of Ireland, had a stellar day to climb to third.

The long postponement was lifted just after 15.30 when a light southerly established itself on the lake following a day of zero breeze and sweltering temperatures. By race time it was 6-8 knots and the best breeze the sailors had seen for three days.

Lyden led round the top after favouring the left from Henry Wetherell, from Britain, and Joan Cardona Méndez, of Spain. Lyden still led at the gate but a crazy second beat let Wetherell through to the lead.

He looked to have it sealed but Muhonen caught him downwind, and was ahead at the gate, but on the outside. Wetherell just crossed the finish ahead, but overlapped with Muhonen, with Lyden a comfortable third.

Three of the top 10 picked up a UFD starting penalty, including regatta leader Olezza.

Race 6 was started without delay to make best use of the breeze and this time Lars Johan Brodtkorb led at the top but he infringed Muhonen, who took the lead and sailed away for a huge win. The next boat was not even round the leeward mark as he crossed the finish.

Lyden controlled second place all the way with Jack Arnell, from Britain, moving up to third on the second beat, but was then passed by Brodtkorb on the final downwind.

As the fleet finished, the wind was still in place, albeit lighter, and the race team tried to get a third race in but after two false starts they called it a day with the setting sun spreading its golden light across the usually green Lake Balaton.

Lyden said of the day, “I thought we were done with sailing today, but then they sent us out, which was good. Both starts were very pin end biased and I managed to get away quite nicely. I was good both top marks and from there I just tried to cover the fleet as best I could to protect the left hand side, which seems to be good here.”

The Irishman said he is enjoying his first Finn regatta. “It’s good so far. It’s a really friendly and nice class, and I am looking forward to the Gold Cup as well next week.”

“I love sailing the Finn. I love the more technical side to it and the downwind with free pumping.”

Muhonen moved from sixth to first overall after his day’s work and is now where he wants to be.

“After the bronze in the youth Europeans this year I was thinking about the gold here, as well as getting some good training before the gold cup, but I would just be happy with a medal.”

Muhonen has only been in the class for just over a year. “I came into the Finn because I got too big for the Laser.” Before that he sailed Optimist, Europe and Laser. He won a few National titles in the Europe, and was 10th at the Laser youth worlds.

On Friday’s racing he said, “It was a pretty good day. Not as shifty as the first days.”

On the race win, “I got a pretty good start in the middle and let the Irish guy cross me and went for the left and the pressure. And then I was first at the top mark and pretty much stayed there.”

He trains a lot with his fellow Finn sailors Mikael Hyrylainen and triple Olympian Tapio Nirkko, as well as Max Salmimen from Sweden. “We also get a lot of help from the Federation, so that’s good as well.”

At the Europeans this year he finished as top Finnish sailor. He has his sights firmly set on the long term goals. “My long term goal is definitely Tokyo; and Olympics after that as well.”

He says the most attractive part of Finn sailing to him is the downwind. “Downwind sailing is pretty great, with free pumping and the physical aspect. It’s definitely a good boat to sail.”

“Also the social side of the class is great. Especially this regatta, which has been very well organised.”

He feels he is having a good regatta so far. “It feels good to be leading now, definitely. Two more days to go.”

If today shows anything it is that Balaton still has a lot of surprises in store, and no one can rely on anything. Day 4 produced lots of high scores throughout the leader board and lots of lessons learned. There are still a maximum of six races left to sail, so the championship could be considered only half way through, with just two days to go.