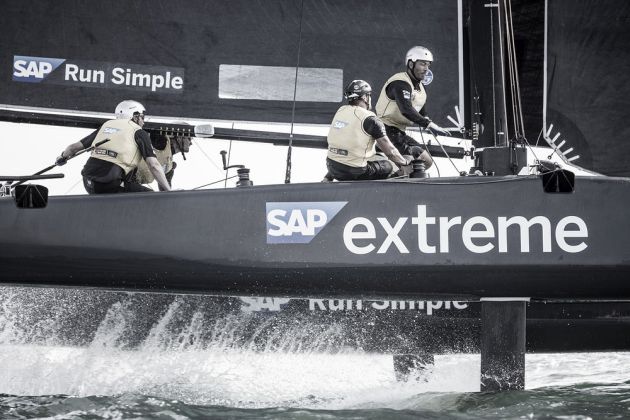 Muscat, Oman, 16 March 2016: The curtain was officially raised on the 2016 Extreme Sailing Series today in the historic old town of Muscat, Oman, with the new breed of hydro-foiling GC32 catamarans more than living up to the pre-season hype.

With a racecourse set against the stunning backdrop of the Al Alam Royal Castle in the Muttrah Port and the imposing surrounding mountains, any pre-season nerves were well and truly shaken off over six fast-paced races, that saw the fleet fully airborne on their foils in 14 – 18 knots of wind, as the Series literally flew into its 10th season.

The local team Oman Air came out of the blocks firing, the experienced former winner of the Extreme Sailing Series Morgan Larson and his team claiming four race wins, setting a high benchmark early on as the boat to beat. “Going in to today we weren’t that confident, but everything came together”, commented Larson. “It’ll be an uphill learning curve for most of the teams, but a lot of them have brought in some experience and I think we’ll quickly see them jump ahead. It was fantastic to sail in a new location here in Muscat, in front of the city. The conditions were great – it was tight, challenging and fun racing – a great season opener.”

Newer to the foiling game than Larson and eager to get competitive quickly, the Danish SAP Extreme Sailing Team looked like a fine-tuned team, never finishing out of the top half of the fleet to finish the day second. Just four points back, the Land Rover BAR Academy sailors, under skipper, Olympic class 49er sailor Bleddyn Môn, took two race wins – a strong start for the youth team. “It was a good day for us, we had some good breeze and everyone’s getting used to the boat now, but we do have a few improvements to make. The guys are always learning, and every day they’re getting better,” commented Môn.

Former Extreme 40 contenders, Red Bull Sailing Team and Team Turx – both with Olympic pedigree at the helm – finish day one in fourth and fifth respectively. While Alinghi – arguably the pre-season favourites – are one point adrift in sixth.

New to both foiling and the Extreme Sailing Series Stadium Racing format, CHINA One, and Sail Portugal may be on a steeper learning curve than some, but both showed they have the necessary talent to get up to speed quickly, posting race finishes in the top half of the pack. Match racing champion and CHINA One skipper Taylor Canfield commented: “It was an awesome day, picture perfect conditions and it was amazing to sail around the coast, racing in front of the cliffs and the Palace.” Reflecting on their performance, Canfield continued: “It was a little tough for us as we’re still getting used to the boat, it’s only our second day foiling, and we’re a new team. The standard in the fleet is incredibly high but we looking forward to the next three days.”