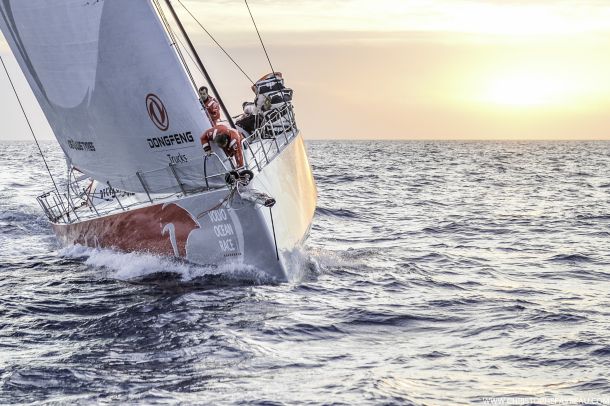 They’ve been back on the water for less than 48 hours since leaving Itajaí, Brazil – but the 5,010-nautical mile (nm) Leg 6 race to Newport, Rhode Island is already taking its toll on Dongfeng Race Team.

The Chinese boat, skippered by Charles Caudrelier (FRA), was forced to suspend racing in Leg 5 due to a damaged mast.

And, before its crew has even had a chance to adjust back into offshore life, bad luck is threatening to derail their race once again.

Skipper Caudrelier, holding the membrane tube, believes that he has identified the problem. “We opened it, and on the high pressure side there is no seal,” he says.

“But there’s a seal on the low pressure side. We can see that there is a crack – that’s why the water is coming outside of the seal.”

It means that the sailors have been forced to resort to an emergency, hand-powered back up – a manual water-maker, which requires constant pumping to produce drinkable water.

But it’s far from an ideal solution for the team, which finds itself around 160nm southeast of Cabo Frio, and still has almost three weeks of sailing to do before it reaches the North American destination.

“It requires some 35 litres of water and it takes 15 minutes to produce a single litre,” adds Greenfield.

“By the time I cap a bottle, my arms are burning and my mouth is dry.”

With their onboard menu consisting almost solely of freeze-dried food, which must be rehydrated in order to be edible, the potential seriousness of this latest set back should not be underestimated.

“Let’s do some maths,” Greenfield continues. “Three to four bottles are required alone to make a freeze-dried meal. The guys eat three meals a day. There are nine of us onboard.

And that’s a conservative estimate, according to Dongfeng Race Team Shore Manager, Graham Tourell. “No water-maker is a major problem,” he explains.

He skippered the boat as it motored under jury rig from Ushuaia, Argentina to Itajaí, Brazil to be fitted with a new mast at the end of Leg 5.

He estimates that, in reality, the sailors ‘may need to pump for eight to nine hours per day to make enough water.’

After all, they are under almost constant physical stress, and subjected to the elements, they require much higher levels of hydration than a regular person.

And the frustration brought on by the setback is already playing mind games with the thirsty sailors.

“It’s funny how, once you lose access to something as simple as drinkable water in the Atlantic Ocean, you start to notice all the water you can’t drink,” adds Greenfield.

Neil Graham, Technical Director of Dongfeng Race Team, remains optimistic. “They know what the problem is,” he says.

“We’re waiting for confirmation from the boat but Kevin (Escoffier/FRA) should have attempted a repair on the membrane pressure vessel.

“The plan was to apply some glue and then wrap the end of the vessel, where the leak is, in carbon fibre laminate, to seal it.”

In the meantime, despite its onboard issues, the Chinese boat is still managing to keep pace with the rest of the fleet.

At the 0940 UTC position report on Day 2, Caudrelier’s crew is in fifth place, but just 1.3nm separates it from leading boat, MAPFRE (Xabi Fernández/ESP).

The boats are forecast to arrive in Newport for North America’s only stopover between May 6-9, after 17-20 days of sailing.