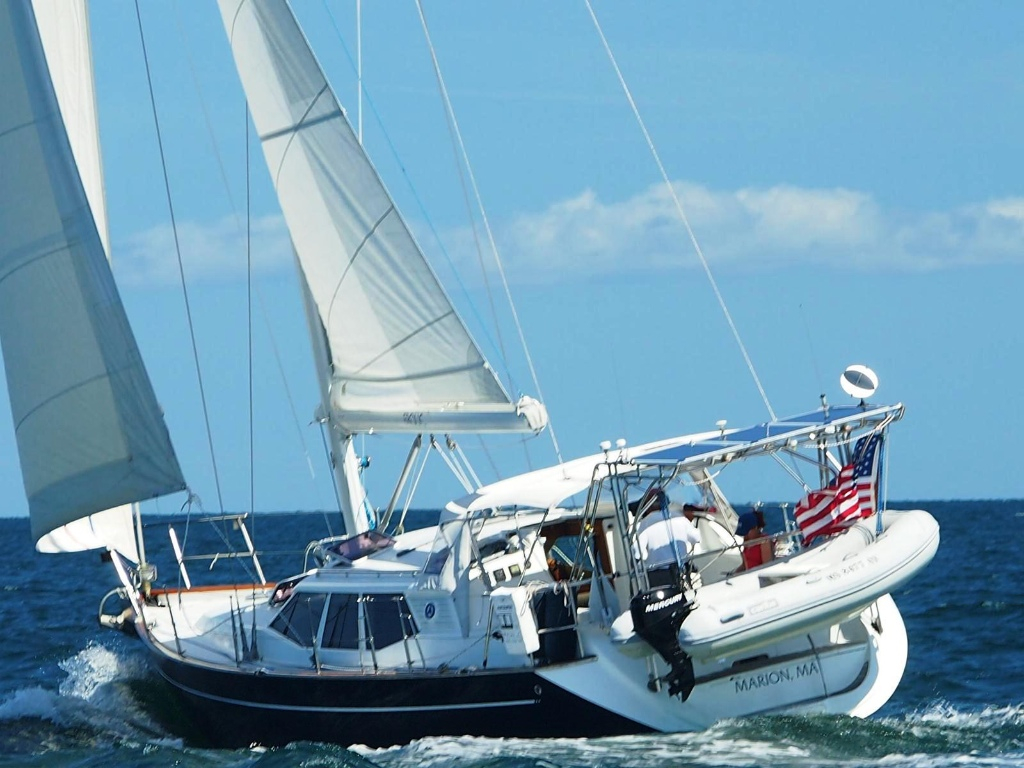 'Frolic' Ray Cullum's Dixon 44 has retired and is heading to Bermuda.

RHADC Bermuda- June 13, 2017: Tuesday afternoon the fleet in the boat Marion Bermuda Race fleet got smaller by three more boats.  Ray Cullum in ‘Frolic’ a McMullen & Wing Dixon 44 was becalmed, Robert Purcell’s ‘Swell’ a Beneteau 40 had no wind and Kenneth Olsen’s ‘Skellum’ an Oyster 47 in persistent light air have all retired.

The retirees now total seven, so the fleet is down to 42 boats.

From the information on the YB Tracker they all appeared to be heading for Bermuda probably under power. ‘Frolic’ was doing seven point three knots, ‘Swell’ was making five point eight knots and 'Skellum' was going six point one.  ‘Defiance’ Peter Noonan’s Swan 56 five miles from ‘Frolic’ was making only four knots.

The fleet was still in a bunch on Tuesday from 116nm out from Bermuda to about 212nm out. Boats at the top of the YB Tracker’s leaderboard for line honours are the scratch [fastest] boat ‘Jambi’, a new Hinckley Bermuda 50 skippered by John Levinson and ‘Tenacious’, a J47 owned by Barrett Levenson and ‘Integrity’ the US Navy 44 skippered by Christopher Cantillo.

Not only is this a slow race, but it is also close. The top 20 boats on the line honors Leaderboard are still within 15 miles of each other ‘Distance to Go’. They were doing four to six knots recent VMG [velocity made good] to the finish in Bermuda. The winds they are northerly under six knots three knots.

Crew-writer Scott Snyder summed it up Monday morning in his “Pearls from Oyster”, Paul Hubbard’s ‘Bermuda Oyster’, for spectators at the Royal Hamilton Amateur Dinghy Club:
Slow going but all is well
Reaching along with spinnaker up, currently pointed straight at Bermuda
Most of the crew snore at an Olympic level
Wind still coming and going.  Arrival maybe Wed night?

Four boats, ‘High Cotton’, ‘Momentum’, Wind Tango and ‘Black Mallard,’ have returned to ports on the east coast.  Three boats ‘Frolic’, ‘Swell’, and ‘Skellum’ are still heading to Bermuda, but have retired.