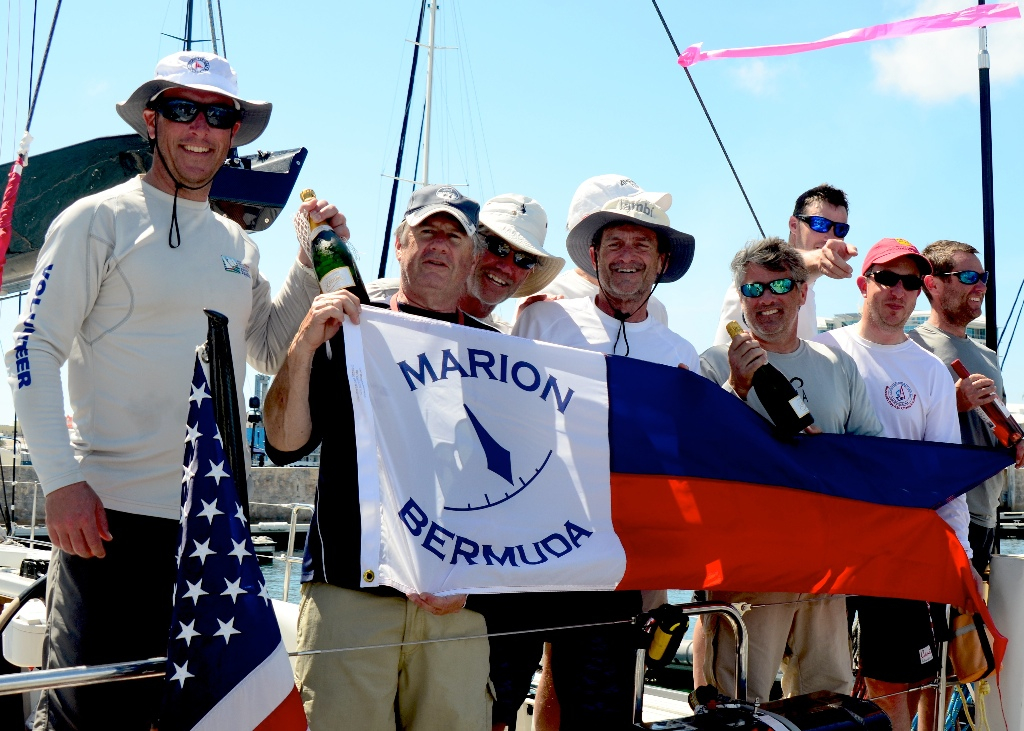 Alan McLane, Executive Director of the race and Willy Forbes, Compliance Chairman, awarded the crew’s effort with beer and champagne and a line honors banner. A tray of those Gosling Dark ‘n Stormy cocktails followed.

Levinson said he has done the trip six or seven times and the entire crew had done many Bermuda races, too. This was the first for his new Bermuda 50 to leave the US. ‘Jambi’ was a “wind machine,” he said,  “outstanding, flawless.”

“There was no wind for most of the race,” he said. “The beginning and the end were fantastic” with good wind then. “Total calm and then nice wind, total calm, nice wind… not rough weather.”

“ We saw a lot of boats every day,” a crewmate chimed in. “The race started over again every day.”

“The best thing on the race,” Levinson said, “was moving ahead at night because it happened a bunch of times.  Boats would catch up during the day then we would do it again. We worked hard at night.”

The fleet was still clustered together along the Rhumb line to Bermuda from Marion with a majority of the fleet expected to finish Wednesday evening and a few expected on Thursday morning.

'Yaquina' appears to still be in Marion so Rich Robbins at Race HQ called to check. The incident reports shows. “Since we have received no YB position for Yaquina, I called to check on them and spoke with skipper Charles Samuelson. They have lost the transponder overboard–it is missing from the place where it was lashed to the rail.
Robbins reports, “Yaquina has been calling in with their position – as of 6/13 9:02 EDT they are at 34 degrees, 25 .8 minutes North, 066 degrees, 11.5 minutes West and proceeding to BDA.”

Mahina Kai – Day 5 Marion to Bermuda – Calm Seas
Wind SW 3kts
Seas 1-2ft
Another day of struggling to find a puff of air. We had a few periods of modest wind, but largely calm with little progress.
The monotony of the day was punctuated by a visit from a pod of dolphins, which always excites the crew. A few seabirds enjoyed fishing in the wake of our boat, and we passed an occasional Portuguese Man o’ War. These fellows are even more at the whims of Mother Nature, relying solely on wind propulsion captured by their above-water sail.
Normally on sail races, it is bouncy, the boat is heeled over, and eating is on paper plates. With the weather being so calm, the Captain has called for the China to be brought out of the closet for a dinner al fresco in the cockpit with lasagna, salad, and fresh fruit cup.  Cookie of the day: Stars!
We continue to hope for some gathering weather, but if this does not come, we will have some serious discussions about our provisions, and how long we can continue enjoying this Bermuda High.

Everyone on board doing fine – in good spirits – eating very well
Did not see many other racers today – did see some cruise ships – a tanker
Saw what looked to be a meteorite last night shooting across the sky!
Celebrated a birthday on board with lots of jokes and many more laughs!
Estimating an arrival of Thursday into Bermuda – but know its up to Mother Nature
Hoping for steady winds

Faith & Hope Dawn #4—The Ocean is not a featureless expanse.
True Wind: 4 knots/W
Sea State: small 1-2' swell
We are still having fun.
South of the Stream, the water seems to have a different, more brilliant blue color. It makes me think of glaciers, even though it was hot hot hot and humid yesterday. We've been seeing those “by the wind sailors” jellyfish. Can't Romberg their names. A small flying fish landed in our scupper Monday night. It's cool to have the Gulf Stream to cross — the ocean is not a featureless expanse.
We've started a marathon read-aloud of “Riddle of the Sands” that has a special place along side “Captains Courageous” on Faith and Hope's small bookshelf. We were amused by Childers' ironic reference to “nautical yarns in the 'hardy Corinthian' style” of “amateur yachtsmen” foreshadowing the revelation of Davies' serious purpose, 53 years after the first Bermuda Race. Looks like we'll have time to read to the end.

Four boats, ‘High Cotton’, ‘Momentum’, Wind Tango and ‘Black Mallard,’ have returned to ports on the east coast.  Three boats ‘Frolic’, ‘Swell’, and ‘Skellum’ are still heading to Bermuda, but have retired.