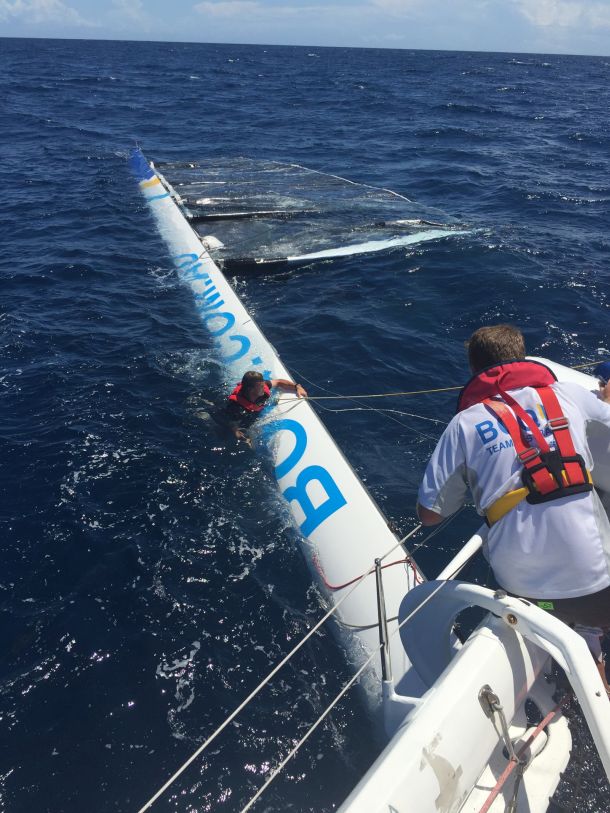 Sean Langman in the water with the TA mast. Photo credit TA crew.

Seven yachts are now docked at Coffs Harbour marina or heading back to Sydney and the last is travelling north to put one of the slower races in 34 years to bed. Mark Gorbatov’s Out of Sight, is making good gains and is due in before midnight tonight, Sunday January 4, 2015.

Given there are still 18 yachts racing north it’s too early to talk about the handicap trophy winners.

James Spithill and the rest of Sean Langman’s Team Australia crew are back in Sydney this morning and more details of the trimaran’s dismasting just before 1100hrs yesterday, Saturday January 3, are coming to light.

According to Spithill around 70% of the original 100 foot mast was cut away and is hopefully still floating at sea with part of the mainsail still attached.  “It was a real shame, it had been a fun race up to then with bit of everything and we were just starting to set up for a classic nor’easter on flat water – the Orma 60s are machines in those conditions. Sean and I are sitting side by side thinking how good is this? Then the top end fitting on the forestay failed,” said Spithill, best known for his world-beating skipper role with Oracle Team USA.

“You have to look at the whole thing. The boat’s not damaged and the guys did a great job of the salvage. I had a similar issue with the tri off San Diego, the biggest issue is trying to get the sail off with all the rigging and the longer you leave it the more it crashes around. At a certain point you have to separate the mast from the boat.

“I was really impressed with Sean… he’s a very good seaman and really calm. He was the first guy to jump in the water and clean it up. All the guys did their job. You always see the good guys in tough situations and these guys were top class.

“Knowing Sean he’ll be back out there and I can’t leave it at that, I’ve promised to get back on for another race.”

James’ younger brother Tom this morning completed the 226 nautical mile course on Richard Hudson’s Farr 45 Pretty Woman, the older brother quipping, “It’s probably the most disappointing thing. I’m due for a phone call, and then I’ll never hear the end of it.”

Langman’s insurer is dispatching a plane today to search for the mast then once located it will be recovered by boat.

“I measure success coming back from setbacks… we just get on with it now,” said Langman this morning. “I did get the chance to sail with the best sailor in the world (James Spithill)… that was pretty cool.

“We had some amazing moments up until the rig came down. On the first afternoon there was an incredibly thick sea fog that saturated our clothes and like a scene out of a Pirates of the Caribbean movie we could hear the groaning of the sheets on Beau Geste then their black sails suddenly appeared a boat length from us. It was nuts!”

The Bureau of Meteorology’s forecast for the Coffs coastal area is NE 10-15 knots.