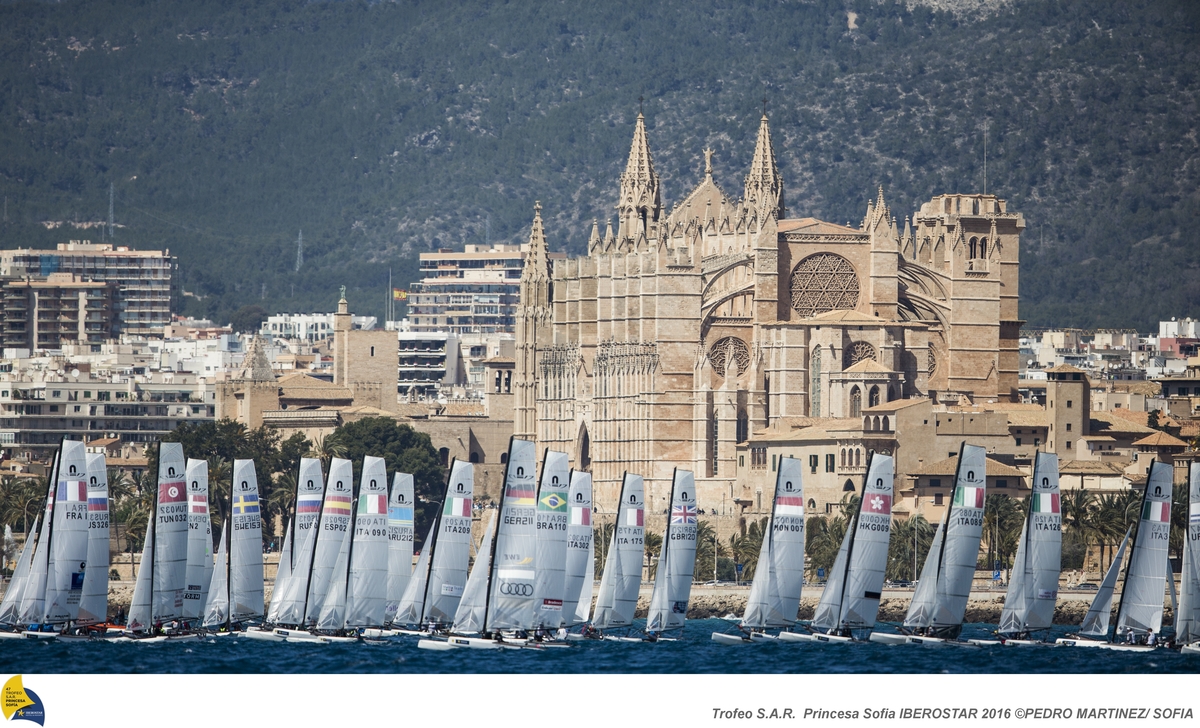 If Day 1 of the Trofeo Princesa Sofia IBEROSTAR proved a close to perfect, straighforward boatspeed day in moderately brisk breezes, Tuesday's races were much more about being in the right place, in the best pressure for more of the time. And so while there a small posse of top sailors who returned a perfect scoreline on the opening day, such consistency was much, much more difficult to achieve today.

If anything it was a day to be brave and be guided by gut instinct. Knowing when to tack up when you were into maximum pressure was one key, but maintaining a good lane to make that move was more than half the battle.

The result table toppers in the Men's 470 and the Laser Radial classes both count all first places – though both Olympic medallists Mat Belcher, and crew Will Ryan of Australia and Evi Van Acker discard their one bigger score, albeit a third and sixth respectively. Clearly their long years of experience have fine tuned their instincts, required on a day like this.

The Men's 470 Class, racing first on their course area, arguably got the better breeze, finishing Races 3 and 4 of their Qualifying Series before the pressure started to ease slightly in the afternoon. But in every class today there was little which immediately obvious. Witness the Finn Class where World Champion Giles Scott had a tough day, amassing 56 points across the two races. Able to discard the 45th – making the wrong choices, but not the 11th, Scott lies second now to NZL's Josh Junior.

Further evidence? On the Nacra17 course the irrepressible French pair Billy Besson and Marie Riou 'only'  had a sputtering 7,8 start to their day before posting their fourth race win to ensure they still comfortably lead the 37 boat class.

After the early mist was finally burned away and the sea breeze came in Belcher and Ryan sailed a solid day to lead by two points ahead of the US Sailing Team's Stu McNay and Dave Hughes.

“There was some chop left over from yesterday but it was a beautiful day, fully powered for the 470, 8-10kts sometimes a little bit more. It was really good, close racing.” Belcher reported,
“We have our Europeans coming up so we take these opportunities to race against our competitors. Everyone is doing their own programme in the class. We have been doing this for such a long time that we do our own thing and don't really worry or think about what everyone else is doing or where they are going.”

“We focus on ourselves. We know what worked last time.” affirms the 2012 Olympic gold medal winning helm and six times 470 World Champion, “There are so many things we want to do before the Games. We have a long list. But we are so enjoying our sailing, enjoying the moment and enjoying the build up.”

“We know Rio relatively well now. The diversity of the conditions are good to be able to sail inshore or out. It has been good every time we have been there, so we feel good. It is the most challenging venue we have raced at, big waves offshore and  lot of current inshore in flat water and heaps of geographical effects. There is plenty going on.” Belcher concludes.

New Zealand's singlehanders are showing well so far. Josh Junior and Andrew Maloney now lead the Finn and Laser classes respectively after today and Sarah Winter, counting 2,2,7 to date, is fourth in the Laser Radials. Junior was happy with his results today, considering the choppy, lighter airs are – he says – a bit of an Achilles Heel:  “For me that sort of light air, shifty, choppy conditions are bit of a struggle so it's pretty cool to get a second and a 14th.”  ” It was sea breeze build to about 10-12kts, and slowly died. But the biggest factor of our race course was the cliff on the left, creating a wind shadow but also creating a big shift, so it was matter of how far you dig into it. The left was favoured it was just how you did it. It would work one time and the next you would lose a lot. “

Junior, who is coached by Finn bronze medallist John Cutler, reflects on the strength across the classes of the young Kiwi team:

“My knowledge of the weather and decision making around the race course has come on leaps and bounds.”
“We are lucky to have John coaching. The wider New Zealand team as a whole is quite a young team and we really feed off each other but still have a lot of fun. Most of the team is between 22 and 27 and we are just great mates and hang out together anyway when we are not racing. We all learn of each other.”

Radial racer Sarah Winther, adds:
“I think we are all laid back enough to go with the flow and don't get too wound up about things we can't control. Mine and Andy (Maloney)'s boats only just arrived here from Miami on time and so we did not even know if we would get them. Kiwis are good at going with the flow. Everyone has stepped their game up since the medals in London. We saw how they did things and we figure it out from there. We have some very experienced coaches in Hamish Willcox, Jez Fanstone and now John Cutler who has a medal but who has done America's Cup and TP52s. So that experience in the team is invaluable.”

Winther's up and down day – 35, 2 – was mirrored through the classes. Although she is odds on favourite to make it to Rio Denmark's Laser Radial World Champion Anne-Marie Rindom is fighting her own Olympic selection battle. She has Miami bronze medalist Sarah Gunni Toftedal two places behind on today's leaderboard. Rindom explained:

“It was hard to make good decisions all the time today. The second race the wind shifted to the left and was dropping and then coming back all the time. It was shifty and up and down.  I just need to be 14 points behind the other girl at the worlds to make sure I go.”

“This is such a strong fleet and it is only getting better and better as we get closer to Rio. But I like it in Rio for sure the best allround sailor there will win gold. I just want to make sure it is me.”

In the Laser Men's fleet Andy Maloney leads Norway's Kristian Ruth and the USA's Charlie Buckingham. Ruth is part of a strong Norwegian squad who have trained this winter on the Bay of Cadiz with 1996 Olympian Anton Garrote.

“It was a diificult day with no system to the wind. The direction was similar most of the time but the key was timing. If you tacked too early and we too conservative then others outside you did better. You had to have no fear and good instincts today.”  said Laser coach Garrote

Despite the short postponement this morning the regatta schedule is pretty much on course. Three races were sailed for the 49ers, RS:X and Nacra 17s while the other classes completed two. Austria's Nico Delle Karth and Nikolaus Resch had the 49er fleet with Spain's young guns Diego Botin and Iago Lopez second. Gold medallists Nathan Outteridge and Iain Jensen hit their straps with wins in Races 5 and 6, elevating them to sixth overall. In the FX Class Denmark's Miami silver medallists Jena Mai Hansen and Katja Steen Salskov-Iversen lead.