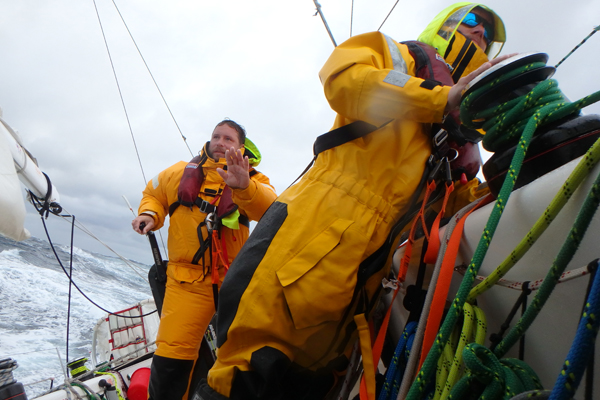 After a day of strong headwinds and breaking seas, the fleet has been heading east to try and stay in the wind as long as possible while a high pressure ridge chases it down from the west.

Whilst the winds have eased again with reefs being shaken out and full sails re-hoisted, the next low is forecast to move over the fleet in the next 24-36 hours and it is looking complicated again. Top gusts are currently forecast at 40 knots in about three days’ time, but the synopsis is not entirely accurate as the teams have found out over the last four days with hugely variable wind speeds and directions.

Unicef is leading the fleet again today after ClipperTelemed+ went top yesterday, LMAX Exchange is in second 6.8 nautical miles behind it, and ClipperTelemed+ is now in third position, 15.78 nM behind the leader. The main pack is still tightly clustered together headed east, but the chasing pack is headed further north on a broader point of sail, seeking stronger winds.

Martin Clough, the Skipper of Unicef, said progress had been akin to two steps forward, one step back, with the variable conditions.

“[We are] constantly breaking away then slowing up as the low is caught up and then traffic light syndrome.

“Having had a frenzy of activity when the new weather hit, we settled on a sail plan that has worked well for the last 24 hours. Some consistently excellent helming by the team has placed Unicef in a lead position and the next 24 hours should see whether we are placed right for the next dose of Pacific met,” Martin added.

Peter Thornton, Skipper of GREAT Britain, in fifth position, described the last 24 hours on board in the North Pacific.

“So from storm jib we were able to slowly put up more sail up front with staysail followed by Yankee 3 later through the night, as well as shaking out reefs until mid-morning when we were back to full main and Yankee 1.

“Since the winds eased, the GRIB weather files have been close to the average experienced so all being well we won’t have any calm periods with this ridge but it will be light and 'slight'. Especially with a sloppy sea again. There is still a good low swell running from the large low in the centre of the North Pacific,” added Peter.

What conditions will the latest low bring? Who will best be able to take advantage of the stronger winds in the push east?

If you are being inspired by the crews and would like to join the race yourself, click here.