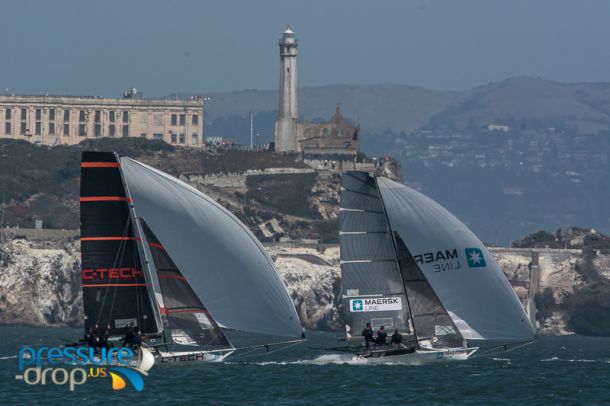 As San Francisco bid adieu to August, it simultaneously said hello to the 2015 International 18ft Skiff Regatta, on San Francisco Bay. Classic early fall conditions were the rule of the day, with miniscule fog which disappeared before the first gun, scheduled for 11:00 AM.

A noon 3.4 knot flood tide and 12-15 knots presented the 11 competing skiff teams for the first of three races. The teams, six from New Zealand, one from Australia and four from the US would quickly find themselves in a quest between current relief and the better breeze.

With billiard table flat conditions, clearer and stronger air was the overwhelming choice and six boats, NZ's C-Tech, Aon, Maersk Line, and Yamaha along with the US teams of Harken and White Lightning would consistently reach the top in relative close proximity.

Choosing a quick jibe set would provide teams with clearer air and more favorable flood strength if properly achieved. The penalty for fouling a competitor or a bad set could cost bundles, but it was a risk the top teams accepted and accelerated ahead of the pack, stretching their leads in the process.

This evolution would repeat itself over and over again, as the apparent wind strength continued to build into the high teens as the afternoon progressed. In all, a relatively calm day on San Francisco Bay. With just a couple slow motion capsizes, Mondays action came down to some tight downwind duels up and down the fleet, as covering the opponent made for some exhilarating moment whilst galloping towards the gate.

It's worth noting, that the Kiwi contingent has become a bit of a force in recent years at this event, which, if memory serves is in it's 13th edition. Buoying the Kiwi 18ft movement has been Graham Cately, sailing on SF Bay on his Maersk Line, which bears the name of one of the primary sponsors.

“They have been very generous with their sponsorship,” Graham notes. “When we kick-started the 18's some 8-9 years ago in Auckland, they were there to get us to and from events, and it has been a tremendous assist in getting teams to events abroad.” The 18ft Skiff fever in Auckland has grown nicely in those few years and they regularly see 11-12 boats on the line during their weekly regattas during New Zealand's Spring/Summer sailing season.

It's not surprising that that type of commitment translates well onto the race course, at home and away, and that's exactly what we are seeing with the results as the Kiwis travel abroad for competition. Four of the top five from today's three races are in fact teams from New Zealand. And they like it here. Tim Parsons, sailing on Stoke Beer, is new to San Francisco Bay, hails from Tauranga about 100 miles South of Auckland, was quite happy with their day, despite not being in the top of the fleet. “We were happy with our progress, and the conditions today were great all around, some challenges with the currents and picking the right angles. Feels a lot like home.”

Feeling right at home has become the norm for teams Like NZ's Alex Valling's C-Tech, and David McDiarmid's Yamaha who along with Howie Hamlin's Harken, rounded out the top three finishers, each playing the shifts and handling the building breeze near flawlessly, each taking a bullet and never more than a trey.

The Kiwi 18ft movement is about to get even stronger, as Graham Catley pointed out. Having built the Auckland fleet of 18's via outstanding Van Muster builds, the Kiwis have digitally scanned the hull design so they can produce a mould via CNC machine, and begin building their own hulls right at home.

This achievement should allow the Kiwi's the chance to build hulls at will and without the additional fees associated with importing a boat from across the Tasman. With the legendary rivalry with their antipodean counterparts already well established in all things sport down under, the Aussie vs Kiwi battle for supreme domination could be getting some additional kindling tossed into the bonfire.

Yamaha's David McDiramid, for one would like to see some more Aussie's at this San Francisco 18' event: “Tell those lazy Ozzies to get their butts up here.”

I think we just did.