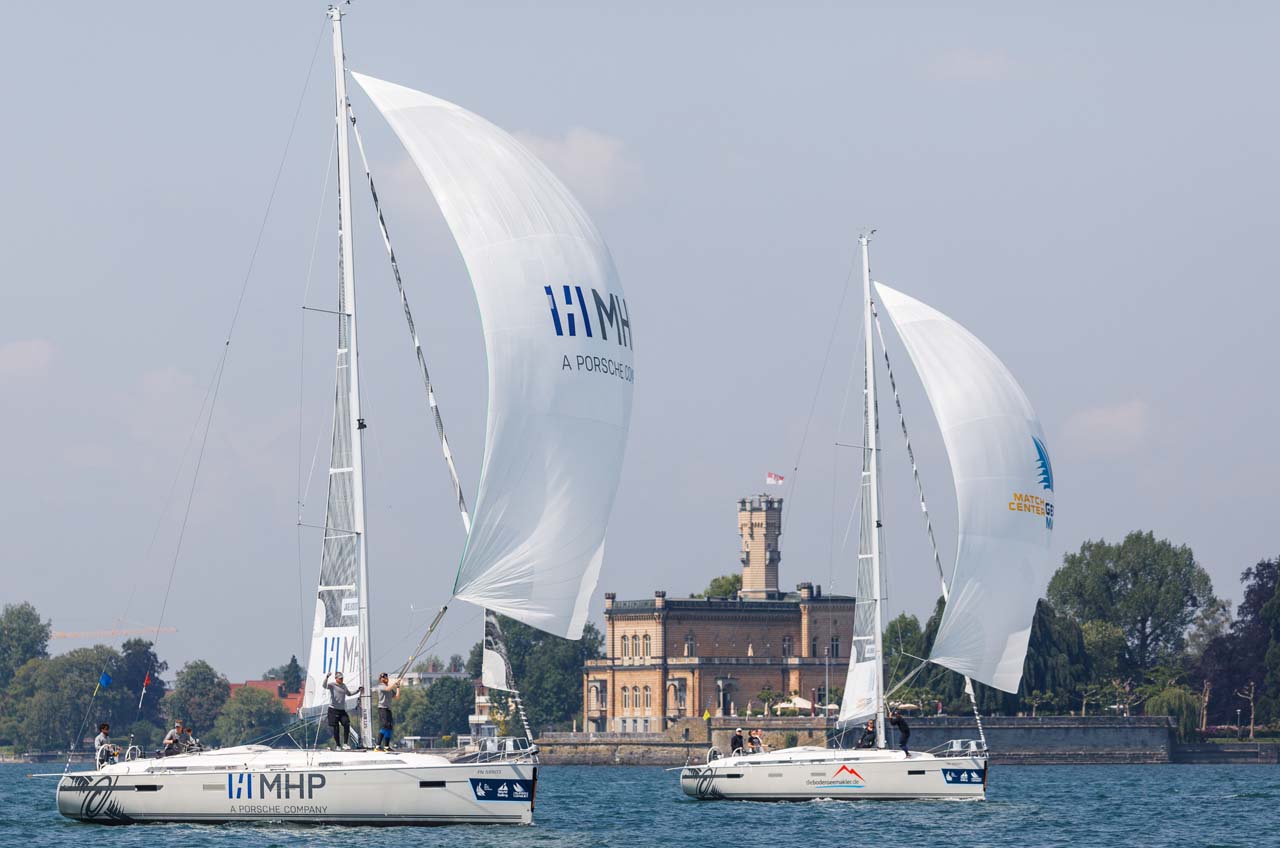 Match Race Germany today has celebrated one of the most intensive racing days in its 21 years old history – from 9am to 6pm, Race Officer Rudi Magg and his Yacht Club Langenargen Team were able to send the 12 crews from nine countries into a thrilling nonstop series of duels.

There was just one match that they gave away. Karol Jablonski and his Jablonski Racing Team, in the morning with their back to the wall and a negative balance of 0:4, finished their successful day by defeating the Swiss.

“We are getting into the rhythm,” former America’s- Cup semi-finalist and 12 time ice sailing World Champion Jablonski said. “Victory in the match against Eric gave us a lot of confidence.“

Jablonski described his duel and loss against his young fellow countryman Szymon Jablkowski as the turning point for his crew. In that match Jablonski’s team received two penalties, one at the start and one at a mark rounding, and was disqualified. “Two penalties against us and the disqualification did motivate us a lot,” he said.

“We knew that every single following match would be like a final for us in our quest to qualify for the quarter finals. Tomorrow will be a big day for us.”

It’s been a thrilling battle between the two Polish crews, said Jablkowski later at the public press conference with a huge smile, “The match against Karol was probably the biggest adventure of my life so far.”

German skipper Max Gurgel and his Team Vmax Racing were sitting in second at the second evening of the 21st edition of Match Race Germany. The Hamburg based quintet was happy with its 5:1 balance, helmsman and physicist Max Gurgel said. “It’s been a good day for us. My team has performed extremely well. Our manouvres and our strategy went really well.”

The 32 year-old skipper, well known amongst German big boat owners as a ‘speed wizard’ making offshore yachts going fast, did put another exclamation mark behind his team’s convincing performance by defeating Austria’s Max Trippolt and his Team Segelmanufactur Trippolt in their last match of the day.

The Austrians finished Day 2 with an even 3:3 balance and will have to fight for their spot in the quarter finals on Saturday.

Four crews are in slightly better position before the finishing stages of the round Robin: Maxime Mesnil’s Franch Match in Black by Normandy Elite Team, Dejan Presen’s Slovenian Lumba Match Race Team, Lukasz Wosinski’s Polish Buzz Sailing Team and comeback king Karol Jablonski each earned 4 wins so far. The third Round Robin day will start at nine in the morning on Saturday.