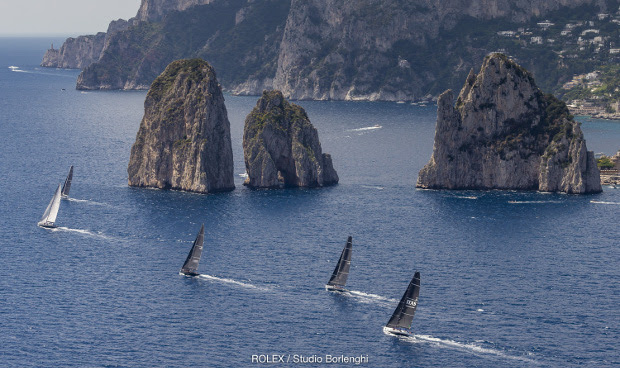 The Maxis and Mylius classes, racing here with support from the International Maxi Association, were dispatched on coastal races, the crews still believing the south-westerly sea breeze would cancel out the south-easterly gradient, as it did yesterday. In the event, the wind piped up to 18 knots, the strongest so far this week.

“It was an exciting day, but we really messed up with the sail inventory,” admitted Tommaso Chieffi, tactician on Dario Ferrari’s Maxi 72 Pepe Cannonball.

“We had a very light forecast so we only had two light spinnakers and, to add insult to injury, when the spinnaker went up it ripped near the luff.”

Even though he anticipated the kite would explode (as it subsequently did) Chieffi was kicking himself they hadn’t readied the Code 0 sooner to replace it. This caused the local Italian heroes to drop two places, enabling Sir Peter Ogden’s Jethou to take the lead. The Italians were fortunate Jethou fell into a wind hole allowing them to round the leeward gate off Procida just 12 seconds astern.

The return leg to the finish line off Capri’s Marina Grande was a starboard tack fetch during which Cannonball closed on Jethou. However among Jethou’s afterguard was former Team New Zealand/Alinghi legend Brad Butterworth – a fairly handy match racer.

“About 500m from the finish they luffed us head to wind – it was full on match racing! But we just managed to beat them on the line which was good for morale,” continued Chieffi.

Despite being beaten, Sir Peter Ogden stepped ashore beaming. “The whole race was exciting – our forecast was 2-6 knots but we had 12-20, which was a bit different! The first beat was fun because there was so much crossing and it was very close. Then on the run, we were very powerful and sailed away from everyone with our A1 spinnaker.”

Like all the Maxi 72s today, Jethou had shed weight, dropping equipment and four crew. Ultimately her second place under IRC was her best result to date. Despite her set-back, Cannonball still scored her fourth consecutive bullet.

As the Maxi Racers enjoyed a high velocity 30 mile broad reach/fetch across the Bay of Naples and back, the Maxi Racer Cruisers and Mylius classes sailed a 15 mile clockwise lap of Capri, passing all of this jewel of the Tyrrhenian Sea’s landmarks, such as the Faraglioni rocks and Blue Grotto.

Peter Dubens and his Spectre crew sailed their best this week, finishing first on the water among the Maxi Racer Cruisers. “Starting is all-important and today we had a nice gap and managed that well and we were off – that created all of the opportunities up the first beat,” navigator Wouter Verbraak explained.

He added that on the first upwind they consolidated their advantage by going inshore at the top of the Sorrento Peninsula where they benefitted from pressure, lift and favourable current. From there their low freeboard white flier relished the reach around the south side of Capri and managed to stay ahead despite conditions going soft towards the finish off Marina Grande in the lee of Capri.

Finally bringing an end to Roberto Lacorte and Super Nikka’s perfect scoreline in the Maxi Racer Cruisers was Jean-Pierre Barjon’s Marseille-based Swan 601 Lorina 1895, today’s winner. “It was fantastic – a very good race and very high level of competition,” said Barjon. “It was mainly 7-18 knots until the wind went light at the end.”

Aldo Parisotto’s Oscar 3 scored her second consecutive bullet in the Mylius Yachts fleet. This caused her to take the lead in the manufacturer’s class, racing here for their third annual championship. However Oscar 3 is tied on points with Vincenzo Addessi’s Fra Diavolo.

Mylius Yachts’ owner, Luciano Gandini, and his brand new Mylius 80 Twin Soul B were first home on the water, although fifth on corrected time. This was of no consequence to Gandini, as his latest creation was launched just eight days ago and today enjoyed fewer teething issues.

“We’re here to race and improve day by day. This is the boat’s very first regatta, so we’re still in a ‘warm-up’ period,” he said. “I am very happy – this boat is our very first 80 footer, a development of our 75, with a modified coach roof, hull lines and increased mast height and sail area.”