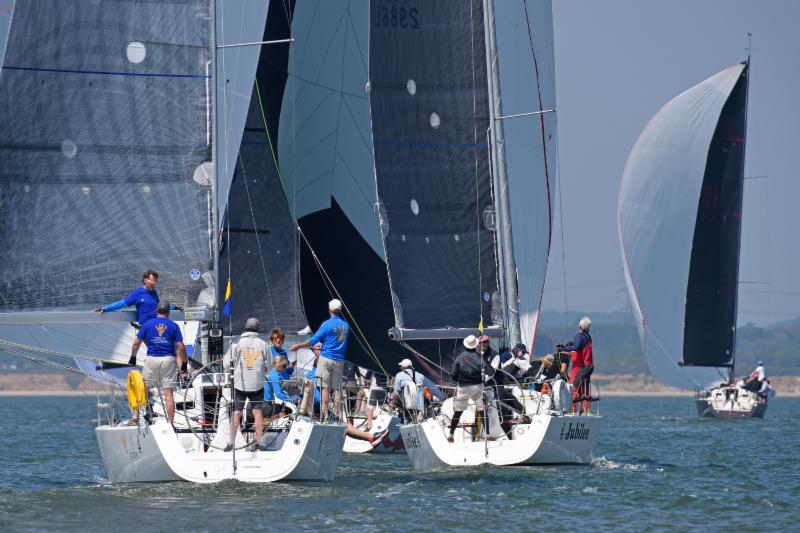 The Vice Admiral's Cup has a long-standing reputation for providing exceptionally close competition. The final day of racing this year saw further intense racing, with most classes going to the wire, in a building south-easterly sea breeze.

The Quarter Tonners went into the final day with only 1.5 points separating the first three boats. And finished with all three tied on 19.5 points. “What's interesting is how close it all is – you can't afford to make a single mistake in hoists, starts or mark roundings,” said Louise Morton, whose Bullet won the final race.

Meanwhile Aguila and Whiskers had a port/starboard incident at the top mark. By the time they had rounded correctly, and spun penalties off, they were at the back of the fleet. Whiskers managed to pull up to third place, but Aguila languished in fifth.

However, the previous race had been a bad one for Morton. “We had some really good starts this week, but in the first race today we were last to tack onto the favoured port tack,” Macgregor added. In a class in which half the races saw at least two boats posting identical corrected finish times, it's vital to fight for every point. Bullet recovered to finish fourth on the water, but lost a place on time correction to Willie McNeill's Illegal and finished the race tied in fifth place with Whiskers.

With Aguila having won three races in the series, Laidlaw took the overall win, with Morton second and Southworth third. “It was very, very close – nip and tuck all the way,” said Laidlaw. “I didn't think we would get it, especially after the incident with Whiskers, so I thought Louise had won. It was great racing – as close as it could be – and superbly run.”

With four boats almost level rating, the Performance 40s also saw tight racing, with four boats taking race wins and every boat in the fleet scoring at least one podium result across the eight races. Race five was particularly notable as the entire fleet finished within 53 seconds on corrected time.

Roger Bowden's King 40 Nifty led by two points at the start of the day, but was slow off the start, having over-estimated the strength of the tide sweeping the fleet over the line. “After that, we had two really good runs,” says skipper Sam Cox, “and a really tight, exciting finish almost alongside [Michael Blair's King 40] Cobra.”

This left Nifty going into the final race with a three-point advantage over Cobra. The two boats sailed down the fleet, with Nifty fifth on corrected time. Cobra finished nearly a minute ahead, but still corrected out to fourth, leaving Nifty as overall winner. “We were really pushed all the way through the regatta, it's some of the best boat-on-boat racing we've done,” said Bowden, who was sailing with a team of family and friends, including his two daughters.

In the J/109 class Simon Perry's Jiraffe dominated the early part of the regatta, winning the first three races. However, Chris Preston's Jubilee led a strong challenge on the second day, leaving the leaders just two points apart at the start of the final day. In today's first race Jubilee started with the upper hand and still held the lead at the end of the first lap. However, she lacked pace downwind and slipped to fifth on the final lap. Jiraffe then went on to win the last race, finishing the series on nine points, with Jubilee second on 15 and David Richards' Jumping Jellyfish third on 23 points.

“It's been a fantastic weekend in a very competitive, but friendly, fleet,” said Perry. “We first started racing against Jubilee in Lendy Cowes Week last year – they are very quick, but we managed to stay ahead of them today, although they worried us this morning. We've got the boat going well, especially downwind, where we are deeper and faster. We also have a balanced crew that have sailed together for some time, which means the mechanics of manoeuvres have been working really well.”

John Pollard's Xcellent stamped his authority on the SB20 class, which held its Southern Area Championship at the regatta. Pollard won six of the eight races and discarded a third.Second overall was Richard McAdam's Breaking Bod, who won two races and counted a podium score in all but one race. Third was Tom Clay's Whyaduck.

Anyone looking at the overall results might assume thatMartin Dent's J/111 Jelvis had an easy ride to victory, thanks to his six race wins. However the scoreboard belies the effort that went into those results. “Many of the races had multiple lead changes,” he said, “and we rounded almost every mark in company, which was really exciting. It's a competitive fleet, with good sailors and well set up boats, so you have to fight for every inch.

“We've had a really enjoyable Vice Admiral's Cup. It's a key event in the J/111 calendar, with good courses for one designs and great race management. They did a fantastic job in getting all eight races away with no wasted time, despite a minimal pressure gradient and spring tides.”

There were three different race winners in the HP30 class, but Malcolm Wootton's Farr 30 Pegasus Dekmarx was always close to the front. The strength of the competition in this fleet is such that, even in the race he discarded, his third place was only 13 seconds behind the winner on corrected time. He added a first and a second place today to end the series four points ahead of Glyn Locke's Farr 280 Toucan.

“It's been a fantastic weekend, more like sailing in a one design class,” said Wootton. “If you tack or gybe 30 seconds too late you're looking at the back of the fleet.”