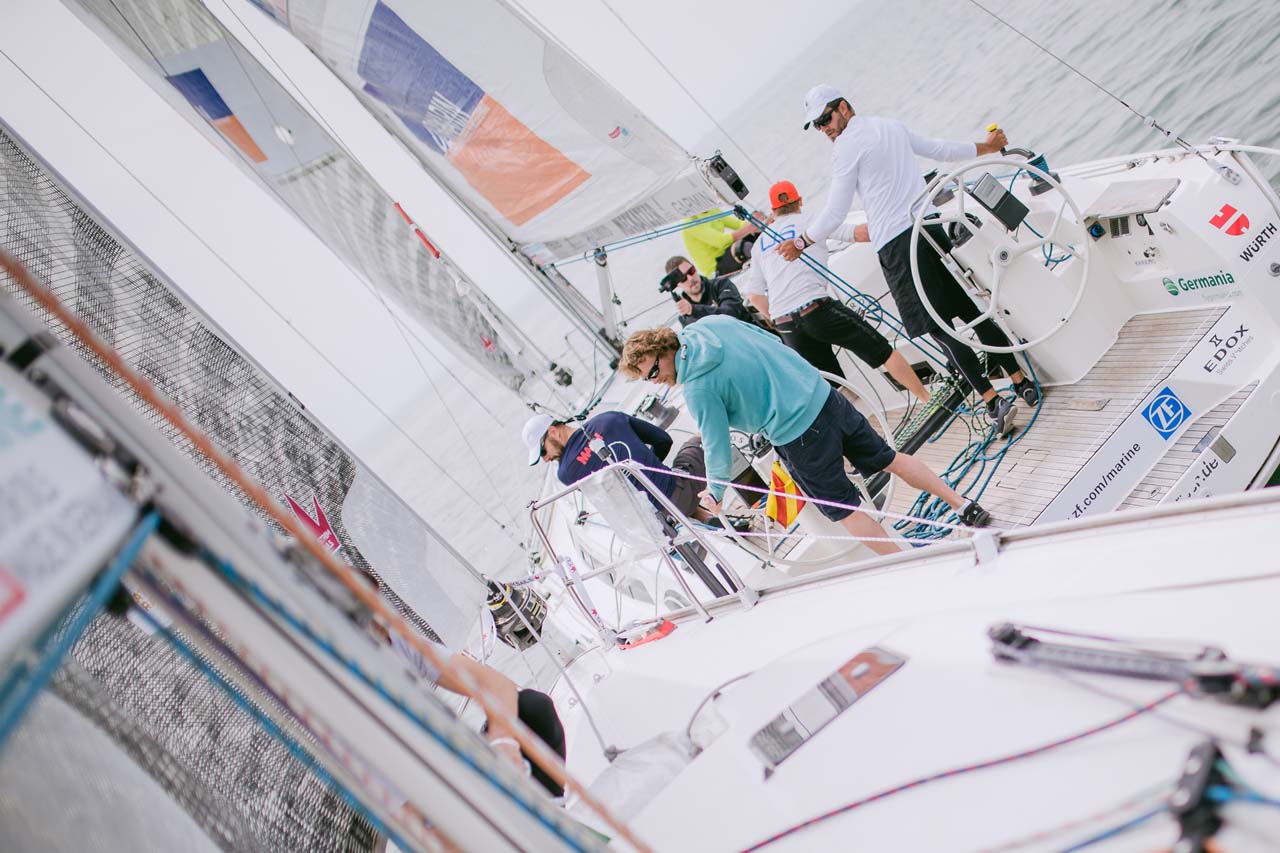 Eric Monnin and his Albert Riele Swiss Match Race Team continued to dominate on Day 3 of Match Race Germany, the defending champions finishing the Round Robin preliminary round with an almost perfect balance of 10:1 wins to advance straight to the semi-final.

“It’s experience and good crew work that make the difference and are key to our performance so far,” said 42 year-old skipper Monnin

Six more teams survived the cut and will fight for the remaining three spots in the semi-finals. Best ranked crew behind the Swiss preliminary round winners were Dejan Presen and his Slovenian Lumba Match Race Team. After struggling on the first two days, the 36 years old helmsman Presen and his crew improved on day 3 and increased their Match Race Germany account to 7 wins.

Max Gurgel and his Team Vmax Yachting keep holding up the German flag on Lake Constance and advanced to the quarter finals as third best team of the preliminary round. Like Presen, the Hamburg based crew won seven matches but got beaten by the Slovenians.

The 32 years old physicist Gurgel and his crew managed to win two thrilling matches in the final phase of the Round Robin, amongst them a fierce battle against former America’s Cup semi-finalist,

Match racing world champion and 12 time Ice Sailing World Champion Karol Jablonski (Jablonski Racing Team). Max Gurgel, his brother Karl and their crew won the duel against Jablonski by „a blink“, as the race office described it via radio.

In an interview right after the match a jubilant Max Gurgel recapitulated the repartee: “It’s been mega close! The start was pretty even. We were able to get the right side of the course and quite happy with that. Then we had a little tacking duel. Karol always was slightly ahead as he enjoyed a bit more pressure on the left.

“We unfortunately did two extra tacks and thus he reached the first mark in leading position. On the first downwind we had no chance to overtake him. During the second upwind leg we tried to put him under pressure with a couple of dummy tacks and managed to make up some ground.

“At the windward mark we were very close to them again, did an immediate jibe-set and were able to roll him. He tried to manoeuvre himself out of the downdrafts by doing a jibe when his spinnaker had already collapsed. He lost a lot of speed and we were able to overhaul them. It was super, super tight. And in the end we were lucky benefitting from slightly more pressure on the last metres.”

These four teams won six out of their 11 matches. After racing all six quarter finalists came together in the Race Village in the heart of Langenargen’s Gondola Harbour to determine the quarter final pairings.

As the top-ranked quarter finalist, it was Dejan Presen who had the first chance to pick his opponent or, as they say in match racing, to pick his own ‘poison’.

Presen chose to play against the youngest skipper and his crew, 24 years old Szymon Jablkowski. Next to choose his opponent from the remaining two options was Max Gurgel who picked the Lipavski’s team and was happy to be able to circumnavigate an early second clash with Karol Jablonski. Thus the crews of Jablonski and Maxime Mesnil make up for the third and last quarter final encounter. The quarter finals will be started on Sunday at nine in the morning.