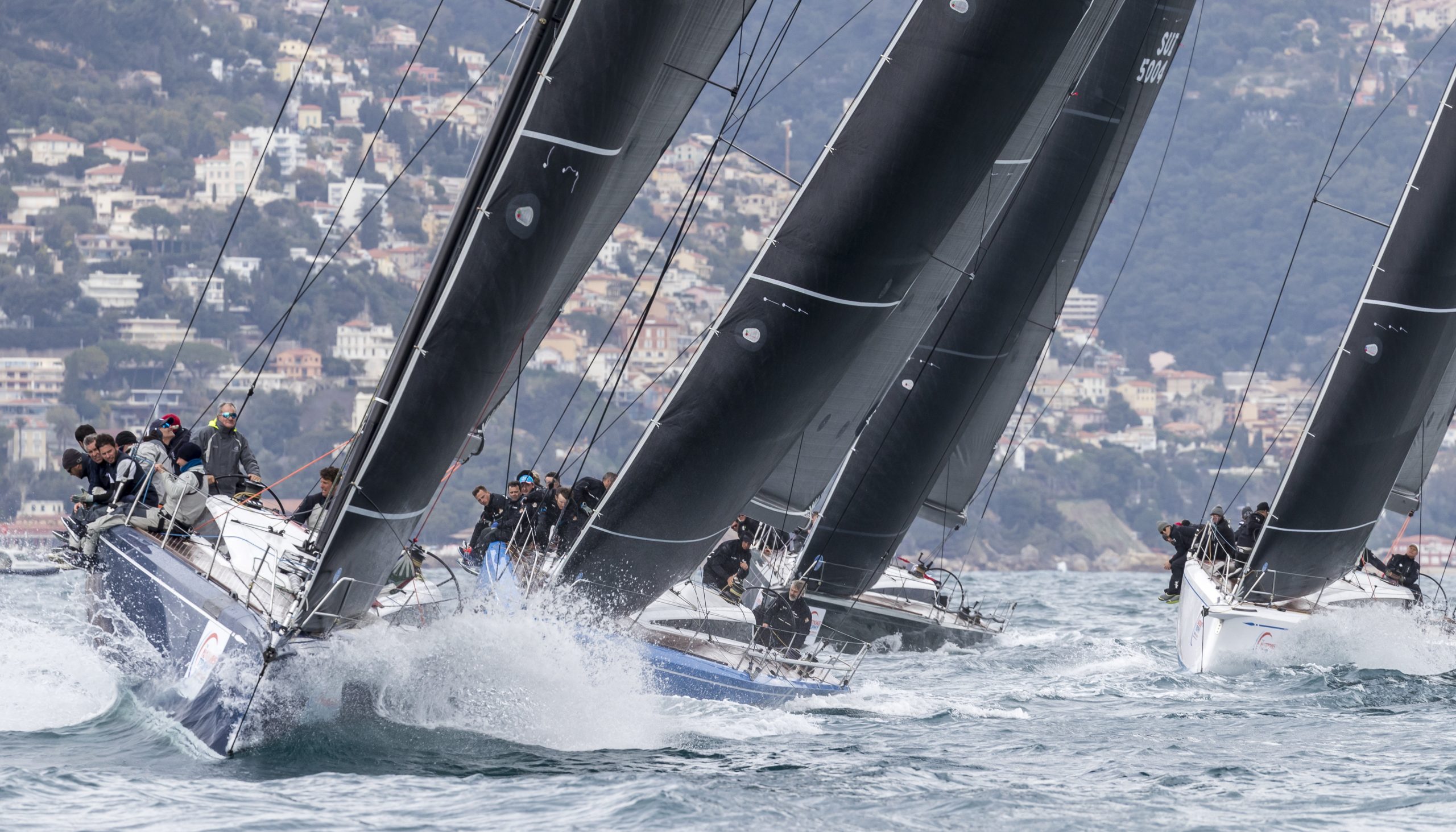 The 2018 Monaco Swan One Design finished on a high – the final day delivering races of contrasting conditions, and roundly considered the best of the four days.

Three races drew out the tension as the leading pairs in all the classes went head-to-head to determine the individual class winners and the best-placed nation. If every one of the four events comprising The Nations Trophy Mediterranean League is as close-fought at this one, competitors and fans alike are in for a treat.

With nine races completed the overall standings were as follows: Cuordileone won ClubSwan 50 by one point from Mathilde; Porron IX stretched away in Swan 45 to win by five points, and, Far Star proved almost as good in ClubSwan 42 winning by four points. In turn, Italy maintained its grip on the Nations Trophy, with Cuordileone and Far Star proving too consistent to be upset by their rivals.

Attention in the Swan One Design fleet now turns to Sail Racing PalmaVela and the second event of The Nations Trophy Mediterranean League 2018.

ClubSwan 50
With the wind filling in in time for racing to get underway a mere half-an-hour later than scheduled, the exemplary Yacht Club de Monaco (YCM) race committee led by Ariane Mainemare proved nimble enough to get in three races and still have crews back on shore well in time for a celebratory prize giving. Nine out of 10 planned races were sailed in total and praise for Monaco and the race organization built steadily during the event.

Ken Read, tactician on the victorious ClubSwan 50 Cuordileone, knows a thing or two about yacht racing and his endorsement was ringing: “The race committee were perfectly patient and did an exceptional job dealing with, at times, pretty difficult conditions. I give them as much credit as the sailors, because that was a hard job to get that many good races off.

“There was not one race that turned into complete weirdness. There were big shifts, but if you played them right you’d win and if you did not you lost. That is all you can ask as a sailboat racer.”

The winning owner, Leonardo Ferragamo, was equally enamoured: “Monaco has exceeded expectations and proved once again it can deliver an event of stature and significance. In turn, the Yacht Club de Monaco has done an excellent job. It confirmed it is adept at managing events in a correct and sporting manner.”

Turning to the class win, both Ferragamo and Read believed success was reward for hard effort and solid crew work. Showing no signs of rust from the winter, Cuordileone was quickly into her stride winning four of the nine races, and ably defending top spot from the fast-improving Mathilde.

“I’m very proud,” exclaimed Ferragamo. “I also feel rewarded because we had done such a great job in preparing the boat and the team last year. We have shown this event we are still progressing and, while there is a long way to go, this is a nice reward.”

Read, in turn, expressed his satisfaction for a job that is not yet finished: “It is a constant learning curve. It was a little like starting over this week, but the guys take it seriously. We are a very good amateur and pro team that works really hard. I still think we are at the tip of the iceberg in learning how to sail the ClubSwan 50. We’ll take our lessons from this event, go on to the next one and try to capitalize.”

The opposition, too, were certainly willing to offer praise where it was due – proof of the spirt within which the racing is conducted. Leigh McMillan, the tactician on Mathilde: “It was close fun racing, it was great to have opportunities to pass boats and to be put under pressure ourselves. It was particularly good racing against Cuordileone. They sailed really well and deserved the win. They are a race-slick team and have set the bar for all the others.”

And if there is any doubt that the battle of the ClubSwan 50s was a closely fought affair, Read had these words about “the green boat”: “We tried really hard to put boats in between us and Mathilde, but that boat sails quick. Morten (Kielland, owner) has done a really good job in learning to drive because they are quick and sail the boat very well. We had our hands full all week.”

Swan 45
The battle in the Swan 45s had also raged throughout the event. Despite the current class world champion, Porron IX, looking the dominant force, Valter Pizolli, a member of the YCM and armed with substantial local knowledge, and his crew on Ange Transparent refused to lie down.

With a possible three races on the last day, a two-point cushion was vulnerable if the Swiss team could string together a run. It would take something audacious and authoritative from the Spanish to bolt closed the door of aspiration.

According to Porron’s owner, Luis Senis Segarra, the strategy on the first race needed to be clear and decisive: “We decided to attack before the start and match race Ange Transparent. We knew if we could win that race it would be virtually over.”

The tactics were successful and perhaps demoralizing too. Ange Transparent was pinned at the start of the first race and unable to recover adequately in that race or any of the remaining. Porron would run away with the day, posting three bullets, and winning the class title with a look of ease. It was not so.

“The races were difficult,” explained Segarra. “The wind changed a lot, so it was technically hard. For me it is a good place to race, but demanding. We had big waves, big wind; flat water & light wind. You have to be good – and I like that.”

Porron IX is not yet finished, and her owner has no intention of resting on the world title: “This was the first event of the season. We planned to use it to increase our ability to perform and to improve for the other events. We are going to do all the events this year in The Nations Trophy Mediterranean League and we hope to win the League overall.”

Segarra was quick to end on a note of praise and encouragement: “We really like the league concept. It gives us plenty of targets through the summer; I would say to everyone that we really enjoy being at Swan One Design events and being part of the [Swan] family.”

ClubSwan 42
Lorenzo Mondo started the week reflecting upon how Far Star had been quick out of the blocks at The Nations Trophy last October, only for her performance to tail off eventually ending third. From the outset of the Monaco Swan One Design it was clear Mondo had no intention of repeating the experience. “We are a pretty new crew,” he said. “Every race we know each other better and we trained more during this winter so some manoeuvres are working better than before.

Heading into the last race day with a two-point cushion and a seemingly irrepressible Digital Bravo snapping at her heels, it looked as though Far Star might face a tough time. As it was help came from an unexpected quarter as the weakest of the three-boat class, Mela, finally proved her mettle winning the first race and finishing second in the next. Digital Bravo’s resistance melted as she came in third on both occasions, leaving Far Star to collect the spoils.

Mondo was naturally delighted: “We grew as a crew this week and it is really good to win the first round of The Nations Trophy Mediterranean League. Today was not easy. The first race the sea was big and the wind was light. The wind increased in the second race and the sea state improved.”

Despite the unexpected end to the competition, Mondo was appreciative of his opponents: “We had a really good competition with Digital Bravo. We are more or less the same level and so it meant it was great racing. When you have good competitors, the wins are more significant so I am really proud of my crew.”

A busy schedule means Far Star will not compete again this season until September. Mondo, though, is already making plans: “Unfortunately, we will not race again until the Rolex Swan Cup. This is where we put our main effort this year. Next year we are going to do the whole Mediterranean League. We really like the experience of being at events with other Swans.”

Final Words
The Monaco Swan One Design was a project in partnership between two respected organisations: Yacht Club de Monaco and Nautor’s Swan. Both have tradition and heritage coursing their veins, but beyond that both share an idealised view of competitiveness and challenge often overlooked in the modern age. Bernard d’Alessandri. Secretary and CEO of the YCM, eloquently and simply summed up the event, saying that it conveyed: “sport and elegance”.

For Leonardo Ferragamo, President of Nautor’s Swan, there was complete agreement: “This has set the standard and created a great anticipation for the following events. The Nations Trophy Mediterranean League is very well thought through and I am looking forward to seeing the progression of the participants and the continuation of the gentlemanly, fair-spirited competition which characterizes the whole world of Swan.”

The next event in the 2018 Nations Trophy Mediterranean League will be Sail Racing PalmaVela from 2 – 5 May, hosted by the Real Club Nautico de Palma.