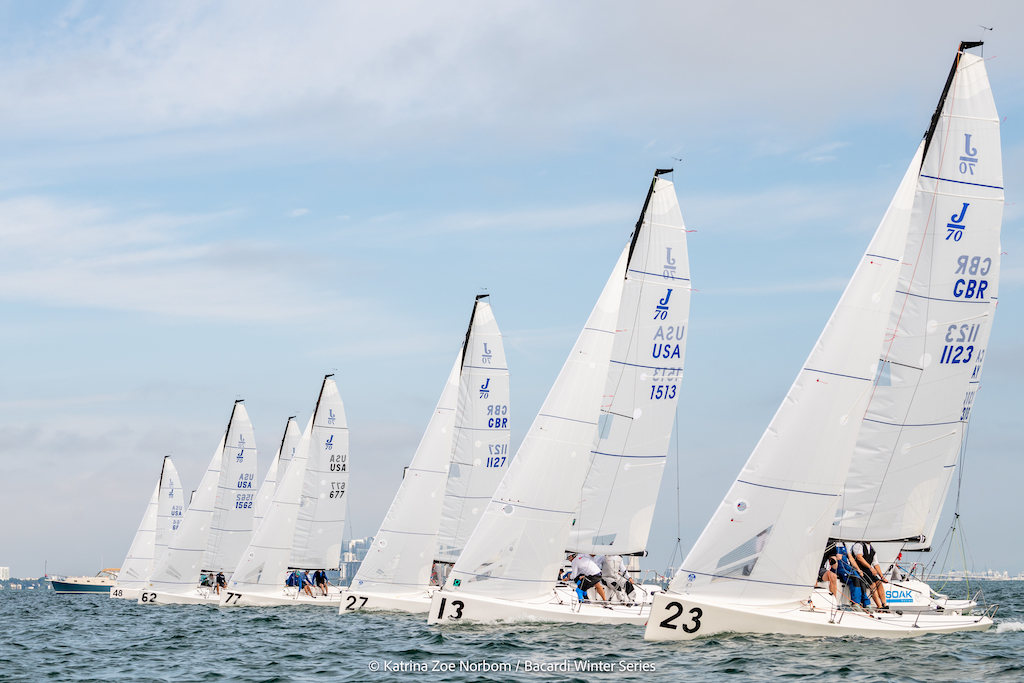 The J70s get away - Katrina Zoe Norbom pic

A slow start to the opening race for all fleets at Bacardi Winter Series event 2, with a light fluky breeze ensuring the notorious Biscayne Bay race track lived up to its reputation.

Plenty of leaderboard shuffles as the crews jostled in the tricky and super shifty conditions, with three races for each of the J/70 and Melges 24 and six for the 69F fleets.

Established contenders and new names made their mark, which means plenty of battles ahead over the weekend. Bobby Julien in the J/70, Peter Duncan in the Melges 24 and Jonas Warrer, the 2008 49er Olympic gold medallist in the 69F will attempt to hold onto their opening day glory.

Melges 24
Peter Duncan reminded everyone of his versatility whatever the weather, to close the opening three-race day in first overall with his crew on ‘Raza Mixta’.

“We had a great day today,” Duncan said. “We had really nice crew work and a good tempo on board the boat.

“What we did right was that we stayed in phase. We were tacking on shifts, and there were a fair amount of shifts going on out there, and we were lucky. The shifts are actually very interesting out on Biscayne Bay in a breeze like today, because they are more dominated by the puffs and you need to stay in breeze. We did a good job with that.”

Race 1 was all about Harry Melges IV, grandson of the world-renowned Buddy Melges, and his crew on ‘Zenda Express’, who led race 1 from start to finish. Second went to ‘Raza Mixta’ and third to Sandra Askew’s ‘Flying Jenny’ team.

Last year’s winner, Bora Gulari on ‘New England Ropes’, was leading Race 2 by around six boat lengths at the leeward gate. With all top five boats packed closely together and pushed hard by Peter Duncan, Gulari struggled to maintain control. On the final downwind, Duncan drove hard, securing his lane to extend over Gulari and take the win, with Michael Goldfarb on ‘WarCanoe’ in third.

Onto Race 3, and the breeze demanded a change of pace and a fully hiked crew, with the race again looking set to belong to Duncan’s ‘Raza Mixta’, which led the first two legs.

69F
There was huge excitement at the debut of the foiling 69F on Biscayne Bay and its roster of high-profile young talent.

All six teams made their mark on the track, but ultimately the battle for glory was a duel between Denmark’s ‘Racing Yachts’ helmed by Jonas Warrer and Switzerland’s ‘Team Tilt’ helmed by Sebastian Shneiter, with Tokyo 2020 49er gold medallist Stuart Bithell on board. The day’s scorecard ended with three wins to ‘Racing Yachts’, two to ‘Team Tilt’ and one to Matteo Pilati on ‘Fly Marga’ of Italy.

Despite the light winds, the 69F fleet were up and foiling, blasting their way round the track in short, sharp 9 to10 minute races as they hit speeds of 28 knots and more.

Racing the 69F is something quite new, as Eric Monez (ARG) crew on ‘The Yugs’, explained: “This is a completely different experience because it is all about foiling and you have to fly. When you fly you are ok, and when you don’t fly, you have a problem because everyone will pass you!

“The teamwork is very, very important. However, the boat is very easy to sail, it is not just for professionals and most people can sail it. It is fast, fun and a great experience.”