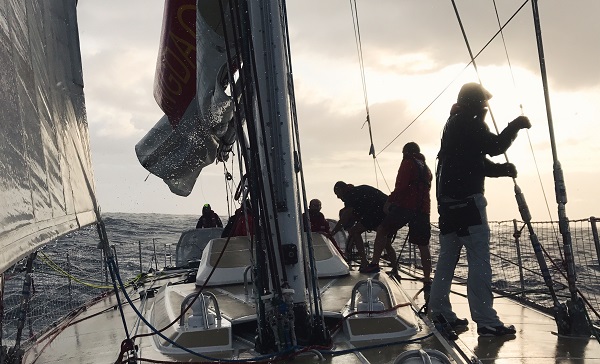 Qingdao in the Clipper Race.

As several teams have re-emerged from Stealth Mode, the leader board is looking a little clearer and Sanya Serenity Coast remains in the lead. More than half the teams in the fleet have now employed their ‘invisibility cloaks’ during Race 1 with HotelPlanner.com the latest to hide from public view.

Visit Seattle ended its period of Stealth Mode at 1200 (UTC) yesterday, re-emerging in second place, but things did not go to plan. Skipper Nikki Henderson explains: “A combination of bad luck and poor decision making from my part has resulted in Visit Seattle being 'kite-less'.

“So, we have now reverted to the traditional Yankee and Main set up, and will remain like this for the rest of the race. It has been an exhausting 24 hours – physically demanding and emotionally draining. The thing that has shone throughout this is the teamwork on board. Everyone pulled together to save, drop, or hoist whatever was needed without question.”

Unicef and GREAT Britain both emerged from Stealth Mode at 0600 (UTC) this morning, with the two teams fairing quite differently during their 24 hours off the radar.

Whilst GREAT Britain failed to make up any significant ground on the leaders and is in sixth place, Unicef is in third and within 28.5 nautical miles of the first placed Sanya Serenity Coast, and just 0.61nM off Visit Seattle in second. Unicef Skipper, Bob Beggs, reports: “A fantastic day under spinnaker, with the best speed of the day 20.8 knots. I'm sure the cheering could be heard in Punta del Este.”

A day after coming out of Stealth Mode, Qingdao is in fourth place, and 58.5nM off the lead. Qingdao recorded a fleet high distance travelled of 115nM (nautical miles) overnight and Skipper, Chris Kobusch, comments: “The past 24 hours were dominated by fast, intense spinnaker runs.

PSP Logistics continues to make good ground and is in fifth. Skipper, Roy Taylor, reports: “As I write, the sky is blue, the sun is blazing away, the wind is on the port quarter at 17 knots apparent, and the Code 2 is flying. We are hitting some of our best speeds so far as we try to grind away at our last 900nM, currently 260nM SSE of Rio.”

Whilst GREAT Britain is currently holding onto sixth place, it is facing a stern challenge from both Garmin and Dare To Lead, who are seventh and eighth respectively. Only 15.27nM separates the three teams and Dare To Lead Skipper, Dale Smyth, has full confidence in his team’s ability, saying: “It’s been a tough night again under spinnaker, requiring the utmost concentration from the helmsman. It’s impressive watching these novices helm with a kite up in the pitch dark like they have been doing it for years.”

The Dare To Lead Skipper isn’t the only one impressed with how his crew of non-professional sailors has transformed over the past 29 days. Liverpool 2018 Skipper, Lance Shepherd, whose team is currently in ninth place and 130.5nM off the pace, comments: “I left some instructions for the team on which angles to hit and where our course needed to be and when I came back on deck a few hours later, I was amazed to see just how well the guys had done.

“High speeds of 18 to 19 knots as they surfed downwind under spinnaker and an hourly average speed of about 12 knots! Fantastic. It's so relieving to see that our crew are now building more and more confidence behind the wheel, both during the day and at night.”

The crew will need to use all their newly honed skills in the final days leading up to the arrival in Punta del Este. Clipper Race Meteorologist, Simon Rowell, reports whilst the low developing ahead won’t be particularly strong, it will result in a number of sail changes due to the fast and ever-changing conditions. The weather should favour the back of the fleet, with the steady wind to help guide Greenings and Nasdaq south.