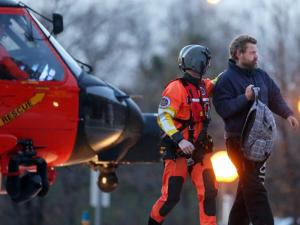 A man whose family reported him missing at sea more than two months ago has been found floating on the overturned hull of his sailboat 300 kilometres off the North Carolina coast.

A Coast Guard helicopter crew from North Carolina flew to the ship and airlifted Louis Jordan to a hospital in Norfolk, Virginia. Jordan, 37, has a shoulder injury, but officials don't know any other information about his condition.

Jordan's 10-metre sailboat had lost its mast and capsized and the tanker crew found Jordan sitting on the hull. It is not known where or how long the boat had been capsized, but Jordan told them he ate fish he caught to survive.