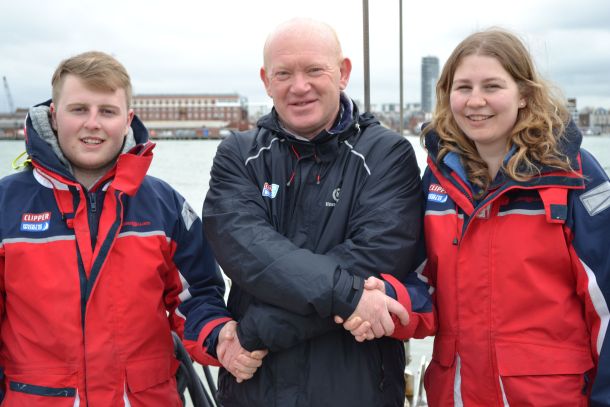 From left to right: Charlie Stannard

Charlie Stannard, 19 from London and Heather Thomas, 18, from West Yorkshire are celebrating today after winning a life changing opportunity to race across the Pacific Ocean in Leg 6 of the Clipper 2015-16 Round the World Yacht Race.

Having been announced as finalists for the competition, run by the Andrew Simpson Sailing Foundation, last December, both had been in Hampshire taking part in a week-long race training trial on the Solent, and were expecting to return to shore today to find out who had been selected for the coveted race experience.

However both returned to shore to receive the surprise news from their skipper that both had been awarded the race place. Sir Robin Knox-Johnston explained: “The Andrew Simpson Sailing Foundation ensures young people are given their best opportunity to achieve their potential through sailing so I am very pleased to support their hard work and make the decision to award both Charlie and Heather with a place on Leg 6 of the Clipper 2016-16 Race.

“They both equally impressed our team during their Level 1 training, in some particularly tough wind conditions, and we believe they both highly deserve the opportunity to race across the Pacific Ocean – a bucket list experience for any sailor. I look forward to following their adventures.”

Each Leg 6 prize is worth more than £10,000. Literally the chance of a lifetime, the pair will receive full Clipper Race training and protective Henri Lloyd foul weather kit, flights to Qingdao, China and home from West Coast USA, as well as the full crew member experience on the longest, and arguably most challenging leg of the famous race.

The Pacific Ocean is the sixth of eight legs which make up the Clipper Round the World Yacht Race. The race is 5,500 miles long and will take approximately one month to complete. Starting in Qingdao, China in March 2016, and ending in the West Coast of the USA, the Pacific is the world’s largest ocean. Crew members will be trained to encounter Mother Nature’s toughest, yet most exhilarating conditions, including towering waves, howling winds, and high speed surfs.

Charlie was introduced to sailing through the Docklands Sailing and Watersport Centre (DSWC), a sailing charity in Tower Hamlets which provides affordable sailing programmes for young people. After first coming to the centre for ‘something to do,’ Charlie caught the sailing bug and competes regularly in dinghy racing events in the UK and abroad. He also volunteers, mentoring younger competitors, and runs weekly sailing sessions for a local disabled group.

Charlie said: “I was rather nervous this morning but I was crossing my fingers for good news. It’s been an awesome experience. Heather and I have really bonded over the last few days and agreed we would support whichever of us were chosen, but it’s fantastic news that we’ll both get to go. It’s my birthday on Monday so it’s like the best present ever. I’m really chuffed.”

Heather Thomas started sailing at age 7 and became a dinghy instructor by age 16. In her spare time, she volunteers with everything from kids club sailing to the adult and disability courses. For the past two years, Heather has also volunteered as a watch leader on the sail training vessel James Cook, run by Ocean Youth Trust North, and has given the majority of her school holidays and many weekends to helping groups, and gaining experience of offshore sailing around the UK’s west coast.

Heather said: “I couldn’t believe it. I was completely in shock when we got the news and then it sunk in and I was like ‘wow – I’m going across the Pacific’! I’ve never been outside Europe before so getting to go to China and America will also be incredible experiences. I can’t wait to tell my parents now – they are going to be so proud.“

Charlie and Heather will complete the rest of their race training over the coming months, and will be assigned to their team skipper and crew mates at the upcoming Clipper Race Crew Allocation event on April 25 at Portsmouth Guildhall.

Sir Ben Ainslie, Trustee of the Andrew Simpson Sailing Foundation which was established in the memory of the Olympic and America’s Cup sailor, said: “We are delighted that both Heather and Charlie will be able to take part in this life changing experience and once again we’d like to thank Sir Robin and the Clipper Race for this generous donation to the Foundation. We are all very much looking forward to following their progress on the race.”

The Clipper 2015-16 Race starts on August 30 and will be the tenth edition of the world’s longest ocean race, also known as one of the toughest endurance challenges on the planet. The only event of its kind in the world for amateur sailors, twelve team’s race against each other across a 40,000 nautical mile long race course split into eight individual legs. It takes almost a year to complete.