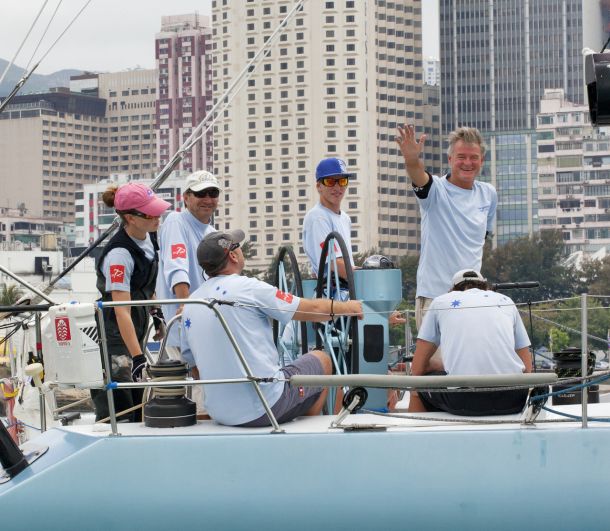 After 42 hours of sailing, less than 11 minutes separated line honours winner, Smith 72’ Custom Antipodes, from TP52, OneSails Racing however Ray Roberts can take consolation from his position at the head of the IRC Overall standings with OneSails Racing looking very tough to beat.

Geoff Hill, owner and skipper of Antipodes, enjoyed the alternative route offered for the race, saying “It was a very good race [of] 330nm and it had what you would expect. It had a good reach, it had a good run and we had good wind most of the way. We did have some holes to go through, but as a competitive race I’d say it worked very well.”

Asked how the race, featuring physical and virtual marks, compared to the traditional run to the Philippines, Hill added “what made it so enjoyable was that there were different points of sail. I actually think with the theoretical marks being used, [RHKYC] can look at doing other offshore races of a similar nature.”

Owner and skipper of OneSails Racing, Ray Roberts felt that it was “a very, very tricky race where we started off in light airs …. Then the breeze filled in a bit and it was a tough race between Antipodes and us the whole way around the track – there wasn't 20 minutes that separated us at any time and we both had visual contact the whole race, so that kind of made it its own little exciting fight!”

Roberts found the variation of sailing a challenge, saying “we found it very tricky because the breeze varied between 3kts and at one stage we had 20kts. Not only that, you had a whole lot of fishing and coastal vessels to deal with and they come at you pretty quick out of the night in a bit of mist. For us guys that sail in the southern ocean, we never see another boat, [so] it can be quite scary!”

Mills 41 Ambush finished at 1329hrs and Xena is expected to make it home five hours later. The remaining boats in the fleet are still racing and if the breeze holds, Race Management will be busy early tomorrow, with ten boats expected between 0400hrs and 1000hrs.

The last word on the re-routed 2015 San Fernando Race has to go to the line honours winner, Hill. “The crew enjoyed it and we had good sailing – you can’t ask for more than that!”

Provisional Results are posted at http://www.rhkyc.org.hk/sfr15results.aspx