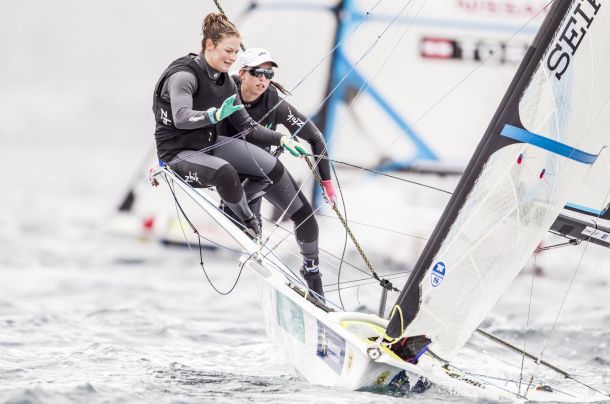 Olympic silver medallist Olivia Price (NSW) and crew Eliza Solly (VIC) have won the bronze medal in the Women’s Skiff 49er-FX at the Trofeo Princesa Sofia Regatta last night (Saturday, 4 April). The pair finished the event with a bang by winning their medal race and moving onto the podium in third.

The Princess Sofia Regatta IBEROSTAR in Palma de Mallorca, Spain (30 March to 4 April 2015) marked the start of the European season and kicked-off racing in the Northern Hemisphere for the Australian Sailing Team. Over 1200 sailors from 65 nations competed in the 46th edition of this international regatta, which has become a regular feature on the international regatta calendar.

Australian Sailing Squad’s 49erFX crew of Olympic silver medallist Olivia Price (NSW) and Eliza Solly (VIC) had a strong finish to the finals racing series on Friday, when they won the first two races of the day, which catapulted the pair into fourth place overall going into the top ten medal race on Saturday.

In the medal race the pair continued their winning streak, winning the race and finishing the event on the podium in bronze medal position.

“We went into the medal race with the same mentality as the previous days, wanting to execute our plan and test ourselves against the rest of the fleet. Since the World Cup in Miami, we’ve been working hard at home on our speed and teamwork, and the work has been paying off this week. It was great to finish the regatta with a win in the medal race in shifty conditions,” Olivia Price said after the medal race.

“We’re looking forward to a little break here in Palma for cycling camp, before heading to Hyeres for the World Cup event.”

Racing had been tight in the Laser fleet as well as between the two Australian Laser sailors with the leader position changing over this week at Palma. Over the past few months, Tom Burton won the ISAF Sailing World Cup in Melbourne in December just ahead of Matt Wearn in second, Matt Wearn was on the podium at the ISAF Sailing World Cup in Miami at the end of January, when Tom Burton did not make the medal race.

Palma’s medal race was not the best for either and a tenth place in the medal race for last year’s winner Tom Burton and a ninth place for Matt Wearn meant the pair finished the regatta outside the medal ranks in fifth and sixth place respectively.

“Palma has been a little different than recent memories. We had very tricky breezes, which were very shifty and patchy. I found some good results at times but I wasn’t so happy with my decision-making. So it was good to start here and get the cobwebs out in the big fleets before heading to Hyères in a couple of weeks,” Tom Burton said about the regatta.

And Matt Wearn added, “The entire regatta was extremely tough both mentally and physically. Racing was close throughout the week so there was plenty of pressure to get good results. Palma is always a great event to start year off with. Having a solid result here sets you up well for the year and now the way the World Cup circuit works it's even more important to perform at every event.”

“It has been great to keep pushing Tom throughout the regatta. I am sure we will have many more regattas where we are fighting it out at the top pushing for that Olympic spot. It's a great motivator having someone there that you always want beat,” he added when asked about the internal Australian ‘Laser battle’.

Three Australian Nacra 17 crews are competing for one Olympic selection spot this season and all three raced in Palma as a warm-up to the World Cup in Hyères, France (20-26 April).

AST cousins Jason Waterhouse (NSW) and Lisa Darmanin (NSW) were the most successful Australian crew at the 2014 ISAF Sailing World Championships in Santander winning bronze and were the first Nacra 17 pair to qualify for the Abu Dhabi ISAF Sailing World Cup Final when they took the Melbourne title in December, but in Palma a week of up and downs resulted in an overall tenth.

While the pair had made it up into third place after three days of racing, they dropped down to tenth on the final day and just squeezed into the medal race:

“The last two days before the medal race were pretty tricky. We struggled, had a DNC when we had a few equipment issues and couldn’t finish the race, and a couple of our other races just were not good compared to the rest of the week. We dropped from third to tenth which isn’t great at all but luckily we just scraped into the medal race.”

“The points were pretty close going into the medal race so we gave it a go, but only managed a seventh place to finish off with. All in all we’ve learnt a lot at this event, which was a bit of a test event for us ahead of the next World Cup in Hyères and we are very excited to get to there in a couple of weeks.”

Australia’s third Nacra 17 crew of Olympic medallists Darren Bundock (NSW) and Nina Curtis (NSW) already earlier in the week missed the opportunity to qualify for gold fleet after they dropped down the ranks following a mast breakage.

Australian Sailing’s Finn sailors of Jake Lilley (QLD) and Oliver Tweddell (VIC) just missed the medal race after finishing the regatta in 13th and 15th respectively. Ashley Stoddart (QLD) finished 16th in the Laser Radial. For all results see below.

The remainder of the team will be arriving in Europe over the next week for the third ISAF Sailing World Cup of the 2015 series in Hyères, which will be the first major benchmark event and will see all Australian Sailing Team and Squad Olympic contenders compete in France from 20 – 26 April 2015.