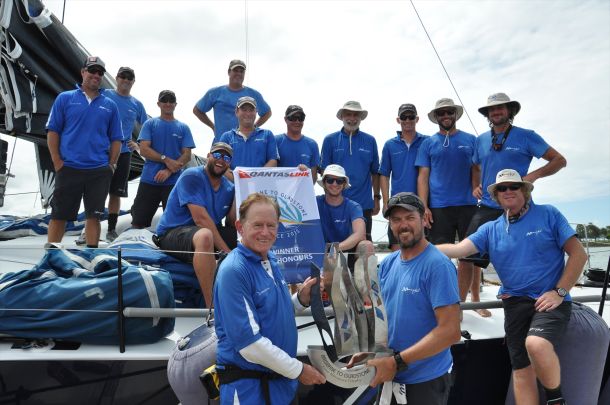 Peter Harburg’s mighty Black Jack, took line honours in the QantasLink Brisbane to Gladstone Yacht Race today with an elapsed time of 24 hours 09 minutes 27 seconds. Whilst they were unable to break the 11-year-old record held by Skandia, it was an impressive performance particularly in the last few hours where they put substantial distance between themselves and nearest competitor Alive, skippered by Duncan Hine.

With the wind forecast to drop later today, Skipper Mark Bradford and his crew will be anxiously watching the timing sheets hopeful of adding the Courier Mail Cup to their trophy haul which already includes the Citizens of Gladstone Line Honours trophy.

The second boat, Alive, is expected to cross the finish line around 2.30pm on Saturday whilst the rest of the fleet is still tightly packed around the top of Fraser Island and Lady Elliott Island. Race officials are expecting a busy night and Sunday morning, as the rest of the fleet battle for corrected time placing. Currently predicted high flyers are Kerumba, Townsville-based Guilty Pleasures VI and one of the smallest boats in the fleet, RedJam.